“Why not put the mics where the people are going to end up?” Detailing a straightforward approach...


When I was coming up through the ranks at a sound company in the early 1980s, I did a lot of folk festivals. Within a few years I went from mixing a small satellite stage (with monitors from front of house) to main stage monitor mixer and then to main stage FOH mixer.

During this process I transitioned from running my own show on the small stage to being an active participant in every changeover as the monitor engineer to watching helplessly from FOH while changeovers took way longer than I felt they needed to.

I was also exposed to various festival management’s attempts to organize the changeovers, which ran the gamut from having a really good stage manager to trying way too hard to “simplify” everything by using color codes exclusively. (Seriously, even to the exclusion of numbers, as in, “What channel is that mic in?” “It’s in red.” “Really? So what input is that on the snake?” “Red.”)

Through all of this, I noticed an important truth: No matter who was on the stage, and no matter what instruments they were playing, they all had to stand (or sit) somewhere on the stage. So I thought, “Why not put the mics where the people are going to end up?” And we all lived happily ever after. I’ll explain how that works shortly, but first a few guiding principles and features.

1) All inputs always appear in the same order at each mixing console. 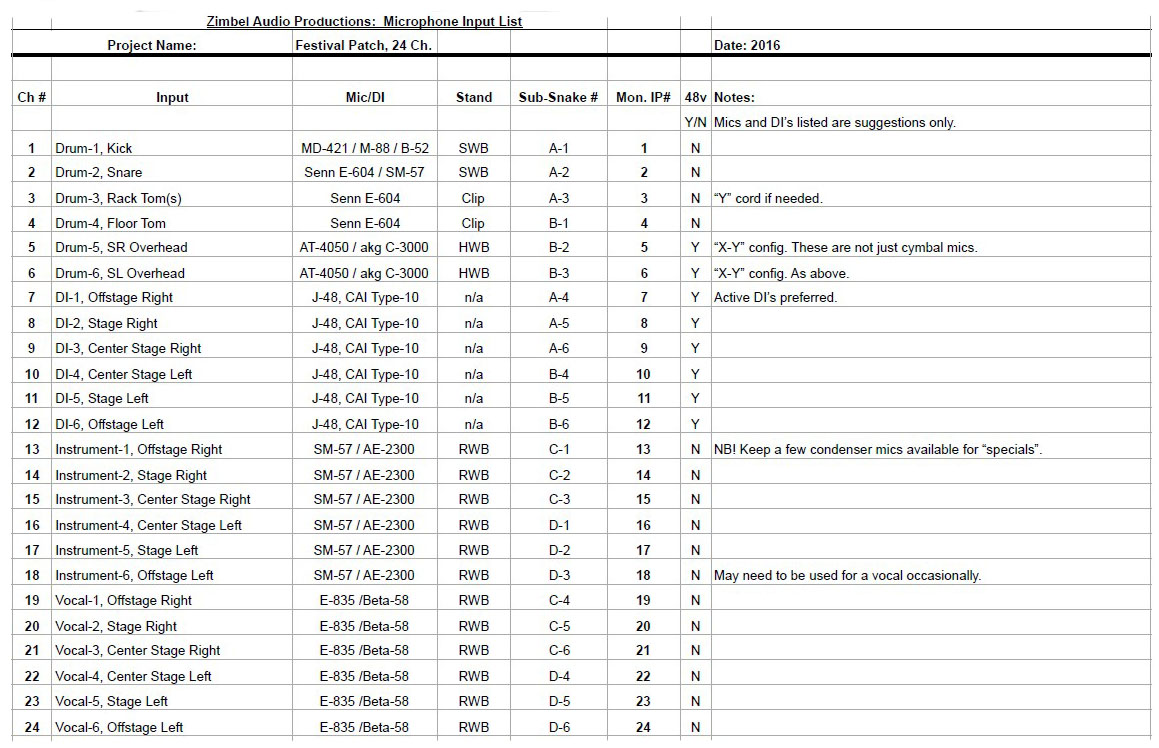 2) That order is always from left to right as viewed from FOH (i.e., stage right to stage left when you’re on stage).

3) This puts all faders under your fingertips, and in line-of-sight with the stage.

4) All inputs are clearly labeled for their position on the stage, using existing and well-known terminology like “1, 2, 3, 4 and “Left” and “Right.”

5) This system is scalable to any size stage.

1) At minimum there needs to be four identical sub-snakes (in a pinch you can use the main snake head as one of the four, or on a smaller stage, two 12-pairs instead of four 6-pairs). In this case it’s six to eight channels each.

2) Drum kit microphones, to taste. I usually favor kick and two overheads with “whatever works” for snare, toms, hi-hat, etc. As long as it fits in the first five channels, with a bass direct box (DI) in channel six. (That is, if the stage is supplied with a drum kit and bass rig. If, not, the bass can be one of the instrument DIs noted below).

6) Some quality cloth tape and a Sharpie to label the DIs and the mic stand bases in this sequence: 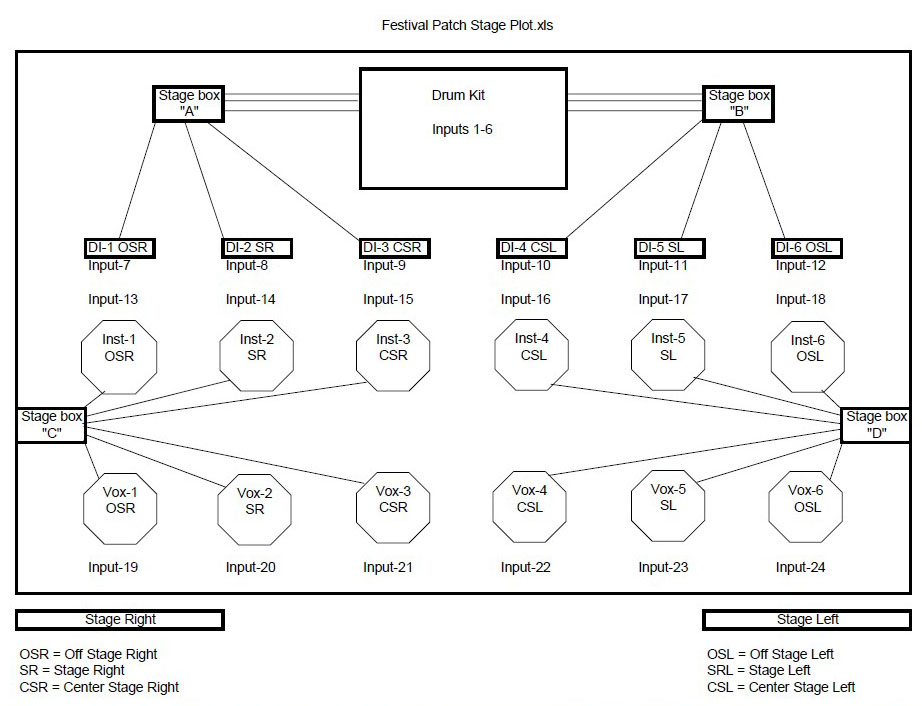 A sample stage plot that depicts a clear, logical approach. (click to enlarge)

Now drop a stage box in each corner of the stage. Each box is going to have three of each kind of input in it, so:

As you can see from the stage plot graphic that accompanies this article, as soon as you place a musician anywhere on the stage, they’ll be very close to a vocal mic, an instrument mic and a DI.

Ike Zimbel is a wireless frequency coordinator and tech based in Toronto. Reach him via LinkedIn. Ike is a freelance RF technician available for tours, one-offs, off-site frequency coordination and consulting on RF issues.
All Posts
Top Stories
Explore All Study Hall