Doing The Groundwork: Part 1 Of A Series On Fundamental Loudspeaker Design

Delving into the world of loudspeaker design, starting with the fundamental ideas behind drivers and cabinet design for subwoofers in sound reinforcement.

In this series of articles, we’re going to be delving into the world of loudspeaker design, starting with the fundamental ideas behind drivers and cabinet design, followed by applying those ideas to design a real-world loudspeaker system, which I will then build and test to see how well we really did. If the timing works well, it might even see use in the field.

In this first installment, I’m going to do most of the groundwork, covering a range of subjects that includes:
• Frequency response and impedance graphs, and how to interpret them
• Thiele-Small parameters – what they mean and how we can use them
• Loudspeaker simulation tools
• Loudspeaker design “dos” and “don’ts”

The focus will be on subwoofers for now, as they’re the simplest of loudspeakers to work with. While a 2-way (or 3-way) project would be very interesting to write about, passive crossovers alone have been the subject of many articles. That said, let’s dive in.

First we’re going to cover something incredibly exciting: graphs. Some manufacturers provide series of graphs in the data sheets for their products, which can be rather useful if you know how to interpret them. So, we’re going to go through some graphs and what they mean with regards to how the product will actually sound. 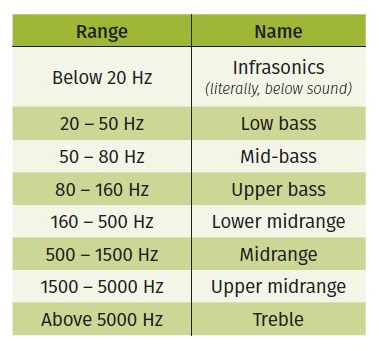 Figure 1 shows a list of frequency ranges and what they sound like. Please note that this is my own interpretation – others feel that certain labels are better for certain areas, but I’ll be using these terms and sticking to them.

The ideal frequency response curve is subject of discussion in the audio world. Some like a flat response – horizontal and smooth from 20 Hz up to 20 kHz; while cinema systems often work to a particular curve as recommended by the engineers at Dolby and the like. There’s also the B&K (Brüel & Kjaer) curve, among others.

When it comes to working with PA systems, I want one that’s as smooth and flat as possible. That way, whatever I’m doing at the mixing desk is reflected in the sound that’s coming out – working with a colored system is like trying to paint with color-tinted sunglasses on.

Whichever philosophy you subscribe to, everyone agrees that having a smooth frequency response is important. That is, free from any large peaks or dips.

Figure 2 shows a couple of frequency response graphs that I’ve measured myself. The exact details of the cabinet aren’t particularly important at this point. What matters is the information we can get out of the graph.

Let’s start with the red trace. In this case, we can see there’s a definite useful bandwidth, going from around 55 Hz before it starts to fall off in the bass, and up to around 200 Hz.

Above 200 Hz, the curve gets quite ragged, and actually has areas with very little output at all – if we were to play this cabinet full-range, the midrange would sound very colored indeed! We can also make an educated guess that this is a fairly small cabinet, given the limited low-frequency extension. It’ll have plenty of “punch” for most music, but will be found lacking when low bass is needed.

Given the limits of the data, we don’t know how this loudspeaker performs into the treble range, but given the midrange performance, it looks like it’s suitable for covering the low end of small systems, with 6- to 8-inch tops. As an aside, that’s exactly what I designed it for.

Next we’re going to look at the blue trace. This one has a single 4.5-inch full-range drive unit in a small cabinet. We can see a few features here:
• The overall rising response will sound quite “bright” or “thin” unless something is done to sort that out.
• A large spike in the 6 to 7 kHz range that will cause some sibilance and other high-frequency harmonics to stick out. A quick listen reveals that it’s rather distracting.
• A bit of a wiggle around 1.8 kHz, which isn’t as much of a worry as the 6 to 7 kHz spike.
• A little roughness in the 300 Hz range.

Now let’s turn our attention to impedance graphs. Figure 3 offers a couple of impedance curves. There’s not a lot going on with the red trace. A large spike indicates the driver’s fundamental resonance – if you tap the cone, that’s the frequency it will ring at.

Apart from that, the impedance drops again until it starts rising slowly towards the treble, which is a result of the inductance of the voice coil.

Looking at the blue trace, we can see a few features. The first of note is the large twin peaks, with a dip in the middle. When it comes to ported boxes, the dip is the interesting bit – the very bottom of that dip indicates the tuning frequency of the ported box, which is a very important bit of information (we’ll see why later). We can also see a couple of impedance wiggles above 150 Hz, which are likely resonances of the wooden panels of the cabinet, or perhaps internal standing waves.

Christopher Grimshaw is a long-time audio professional and the founder/owner of Grimshaw Audio, based in the U.K.
All Posts
PrevPreviousKick Drum Microphones: Techniques to Optimize the “Bang”
NextChurch Sound: The Power Of The UnseenNext
Top Stories
Explore All Study Hall