What does it do? When and how do I use it?

Some of the most frequently asked questions we get have to do with equalization: “What does it do?” “When and how do I use it?”

For whatever reasons, most church sound staffs desperately want to put EQ to the test and into action. Perhaps it’s that adjusting equalization controls provide immediate sonic response — for better or worse, you can instantly hear what you’ve done.

Equalization can be used in different ways, including: musically (that is, to “sweeten” certain frequencies of an instrument/vocal so that it is smoother sounding or more present in the overall mix); correctively to make a voice or instrument sound more like it should when inadequate microphones, acoustics or the instrument/voice itself needs help; or creatively as a special effect to make voice/instruments sound unnatural and otherworldly, very different from the original sound source.

We usually don’t want to create such sounds during services, though, as we want to understand what’s being said, and instrumentation usually plays a supportive role rather than an outrageous-sounding feature role.

In the church, generally, EQ is used to modify a voice/instrument so it is clearer and more representative of the original sound source. But suppose your original sound source is lacking depth or presence? Well, proper equalization can also correct a potential dilemma, such as making a nasally, bottom-heavy or thin voice sound more “natural” and thus, more intelligible.

A simplistic explanation of EQ is essentially the boosting/cutting of specific frequencies so that a sound source sounds more like itself despite acoustic, microphone or instrument or vocal shortcomings.

In essence you are adding or subtracting volume to specific frequencies. You can make people and instruments sound muddy and dark or thin and brittle. You can also by raising the level of specific frequencies create lots of feedback. That’s one major reason why you need to be careful when equalizing sound sources.

Now, of course, in order to properly adjust a voice/instrument via EQ you need to know what that sound source sounds like naturally, and if your microphones happen to boost or cut particular frequencies as part of their design. This is critical to your EQ success: know your sound source.

Most church folks I speak with don’t really know what the guitars, keyboards or choir voices sound like naturally, without sound reinforcement, and, therefore, can not adjust EQ to help solve an audio challenge. They have no starting point of reference. What to do?

Make it a point to rehearse with your choir and praise band. Ask the pastor if you can listen while a sermon is being rehearsed. In short, sit and listen so you learn what everything – voices and instrument – sounds like in the sanctuary or fellowship hall without the support of the sound system. Now you have a reference point.

Don’t, for example, waste your time trying to boost a low-end 200-Hz frequency on a piccolo. It isn’t there. The frequency chart like the one to the left details the frequency ranges musical instruments and the human voice produce. Study the chart (click to enlarge it), make copies and hang it in the sound room for reference. Once you know what instruments and voices are supposed to sound like you’ll be able to makes EQ adjustments quickly and effectively. 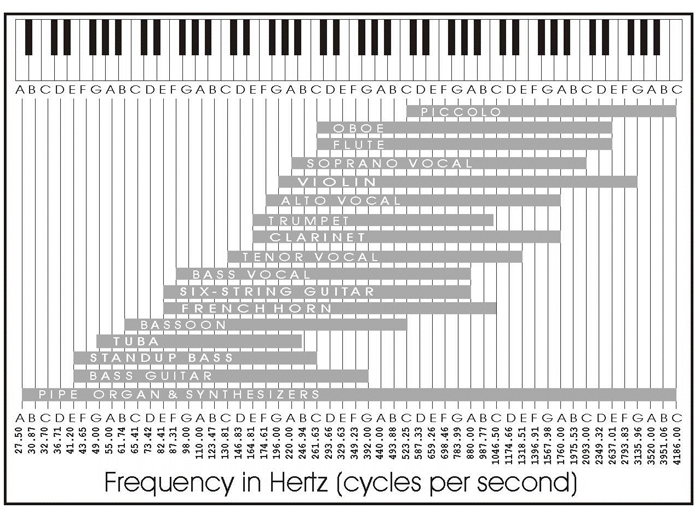 Let’s look at just some basic EQ terms and controls common to many consoles:

—Low-Pass Filter: Insert this filter into circuit to allow low frequencies to pass into the sound system. Also called a High Cut Filter.

—Sweepable EQ: Generally used in the mid frequencies. Set a certain amount of boost/cut and then “sweep” through the frequencies to find the sweet or sour frequency.

Always start with EQ controls set to “out” or off. Always check that EQ is out of the circuit before you start a service or rehearsal. Start each service with EQ “normaled,” which means out of the circuit, and all EQ controls set to off. That way you won’t inadvertently hit the button and send the congregation running for the exits. Generally, the noon or 12 o’clock position (zero) on the knob indicates no cut or boost for that group of frequencies. Turning the knob to the right (plus + side) boosts those frequencies, while turning that knob to the left (minus – side) cuts those frequencies.

Also, if you can’t hear a particular instrument well enough, rather than boosting 3,000 Hz to make it stand out, try to figure out what other instrument is getting in its way and cut 3,000 Hz out of the offending musician or singer. That way you reduce the potential for feedback in the PA system while increasing intelligibility of the mix… always a good thing.

Equalization can be your friend or foe depending on how much control you take before you use it. Your goal is to use EQ in the church to make instruments/voices sound more intelligible and natural in the environment.

Mike Sokol does sound system design and training for JMS Productions, his consulting company in Western Maryland. Visit www.livesoundadvice.com for his educational articles and videos, and email him at [email protected] with comments and suggestions.
All Posts
PrevPreviousDiGiCo Acquires KLANG:technologies
NextA Primer On Phantom Power For Condenser MicrophonesNext
Study Hall Top Stories
Explore All Study Hall