The Bien Trucha Group, located in Geneva, Illinois, owns four restaurants located in the western suburbs of Chicago. In keeping with its commitment to quality food and atmosphere, its newest restaurants, Quiubo and Santo Cielo, both opened with d&b audiotechnik-based sound reinforcement systems.

Rodrigo Cano, COO and partner for Bien Trucha Group, played a major role in the decision to install d&b audiotechnik. Cano graduated from college with an audio engineering degree, but ultimately was pulled back into the family restaurant business, which was growing in leaps and bounds. Fortunately for their patrons, his love of audio translated into his desire to install the best sound reinforcement system available.

“When I was at Burning Man, our camp had an art car that used d&b loudspeakers,” explains Cano. “I was absolutely blown away by the audio quality – fell in love with the system. I realized our customers should have the same audio experience. Upon my return I started working with John Simshauser, Audio Logic Systems (ALS), to see what we could put together for Quiubo, which was opening a few months later.” 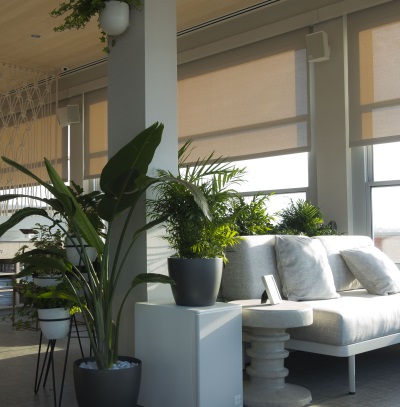 Quiubo, located in Naperville, Illinois is a compact but airy space. The entrance opens into a lively bar and waiting area with a long dining space to the right. The zoned distributed system is divided into the bar, indoor and outdoor dining areas.

Three column-mounted d&b 5S loudspeakers cover the bar area while six more – mounted on both sides of the room – blanket the indoor dining area. Two 8S loudspeakers, one directed at the bar and the other the waiting area, keep the area immersed in sound. Quiubo also offers outdoor patio dining where patrons enjoy background music via three 4S loudspeakers. A 12S-SUB, positioned on the ground near the restaurant entrance, drives the low end of the system.

“Rodrigo’s goal was to install the highest quality music system that would offer even coverage and plenty of headroom in the most visually unobtrusive way possible,” explains Simshauser, director of operations at ALS. “The size of the 5S loudspeaker is deceptive, people are amazed at the sound levels it produces. The zoned system allows them to crank it up a bit in the bar area when needed with the 12S-SUB adding additional punch.”

Shortly thereafter, Cano and his family started working on their next project, a rooftop lounge and restaurant located a few blocks down from Quiubo. Santo Cielo, loosely translated as “Good Heavens,” occupies the top (fifth) floor of the newly built Hotel Indigo, which is now the tallest building in downtown Naperville, Illinois.

“Not only did we receive tons of compliments on the sound at Quiubo but we also played the d&b system 24/7 for more than a year and never had a problem,” adds Cano. “When it came time to design the system for Santo Cielo, I knew we needed to use d&b again. You need a system you can rely on. Plus, Santo Cielo was going to be a bit different than the other three restaurants. We were changing things up a bit.”

Santo Cielo features a 65-seat dining room, a private room for 20-25 that can also handle overflow guests on busy nights, and a bar and lounge space that accommodates another 50 guests. The restaurant is surrounded by three panel windows that can be retracted two-thirds of the way downward, creating an open air dining space bordered by rails when weather permits.

Cano and Simshauser created a five-zone system that keeps patrons immersed in the atmosphere of Santo Cielo. The two zones covering the bar and lounge area are made up of eight wall-mounted d&b 5S loudspeakers, four distributed throughout each zone. Weekend nights feature DJ music and dancing. As a result, a 12S-SUB is tucked away in a corner to provide the driving beat a late-night nightclub environment demands.

“Once again, the d&b loudspeakers are visually discreet while providing extremely high quality sound,” says Simshauser. “After the diners leave, the restaurant converts into a lounge atmosphere – which is easily carried out throughout each zone. If one area prefers to tone it down a bit, it can be easily modified to their needs. It’s flexible and attractive – exactly what Rodrigo envisioned.”

“People wonder why we go to such lengths to create a musical atmosphere for our customers,” concludes Cano. “Installing d&b audiotechnik loudspeakers is above and beyond what people expect, but that is what these restaurants are about – offering the best dining and entertainment experience possible. Music plays an important role in our accomplishing that. It would not be the same without these systems.”