B-2 Returns To Belarus With Meyer Sound

It was a party more than three decades in the making when rock band B-2 returned to its home turf of Belarus for a one-day free concert in front of 120,000 fans. Staged in a vast open park in front of Bobriusk Arena, the event was powered by a sound reinforcement system anchored by Meyer Sound LEO Family loudspeakers and bolstered by additional MILO and MICA line arrays.

The band’s founders, known as “Shura B-2” and “Lyova B-2,” have been producing Russian-language rock since working together as teenagers, with their current band hitting its stride in the early 2000’s with a series of hit records and the score for the film, Brother 2. This summer’s day-into-night concert also featured four other top bands leading up to B-2’s closing set.

The selection of an all-Meyer Sound system was a collaborative decision on the part of the band members and the tech crew, most notably Sergey Bolshakov who for the past 19 years has been B-2s recording and concert sound producer, as well as their monitor engineer. 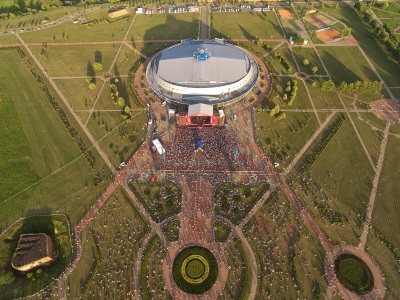 “It was a collective decision,” says Bolshakov. “Meyer Sound was chosen after we had used almost every sound system available on the Russian market. On recordings B-2 music is rich in details and nuances, and we’ve found that not all concert sound systems can reproduce the subtle details when at full power. But the Meyer Sound LEO Family does just that like no other. It can deliver all the information even in the largest venues.”

The venue for B-2 Fest turned out to be larger than expected. The original plan called for coverage of an area about 200 x 260 meters, but the crowd swelled to cover an expanded swath measuring 250 x 435 meters. The main system, augmented by four delay towers set back 60 meters, kept the crowd ecstatic no matter the distance.

The core LEO Family system comprised LEO and LYON line array loudspeakers along with 1100-LFC low frequency control elements. Due to the massive scale of the concert, the LEO Family components were supplemented by legacy loudspeakers, including MILO and MICA line arrays and M3D-Sub subwoofers. For drive and optimization the system utilized one Galileo GALAXY 816 AES master processor and eight GALAXY 816 array processors.

“It’s great when a band like B-2 can gather such a large audience,” continues Bolshakov, “but at the same time we must give all the people what they came for — good music quality no matter how far they are from the stage. The LEO arrays are detailed and dynamic at very long distances, the LYONs have clarity and versatility, and the 1100-LFC has incredible phase accuracy in the low end. The result was sound without degradation at a great distance — what we needed to make everybody happy.” 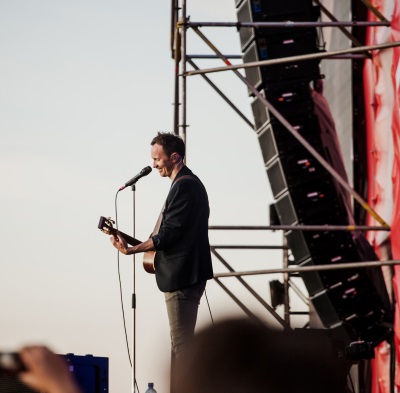 Also appearing at B-2 Fest were four bands whose members had developed strong musical ties to the B-2 founding duo over the years: Sety from Russia, Solnechnaya Storona from Belorussia, Brainstorm from Lithuania and Midnight Faces from the USA.

Sound production for the event was a team effort, and Bolshakov gives full credit to Vladimir Zverev of Meyer Sound Russia for design and configuration, Yuri Novikov who mixed at FOH, and all the other techs who assisted in rigging and tuning.

Building on decades of recordings in various associations stretching from Russia to Israel and Australia, B-2’s founding members are established as revered musical icons in their homeland. Their chart-topping hit albums include Meow Kiss Me (2001) and Inomarki (2004). B-2 received the MTV Russian Music Award for Best Rock Act in 2007.