Audio Visualization: Is A Picture Worth A Thousand Words In Audio?

The value of thinking about -- and looking at -- the mix in a graphical way.

It is said that “a picture is worth a thousand words” and nowhere is this more applicable than when trying to teach complex concepts.

A graphical depiction can often convey an idea better, and quicker, than a whole bunch of words. This is because our brains are mainly image processors, not word processors; the part of our brain that processes words is actually very small in comparison to the part that processes visual information.

Bearing this in mind I’ve been exploring various ways of representing key audio concepts and terminology visually. This invariably involves a certain degree of simplification but I think the results are a useful weapon in the battle against incomprehension.

Let’s start by looking at a simple way to represent the frequency content of a single sound, such as a kick drum, shown here against a vertical axis denoting frequency (Figure 1). On the left is a representation of a kick drum that has been miked in a standard way, with a single microphone poking through the hole in the front skin. 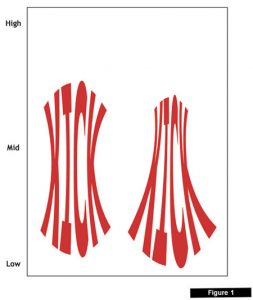 Here we can see there is slightly more energy in the bottom and top of the sound (i.e., the thud and the click) than there is in the middle – quite common when close miking a kick drum. The right side of the image represents the same signal after a little EQ has been applied, in this instance the bottom end has been enhanced while the lower and upper mid range frequencies have been reduced slightly to give that classic kick drum sound.

EQ isn’t the only way we affect the frequency content of sounds so let’s take a look at some other methods (Figure 2). 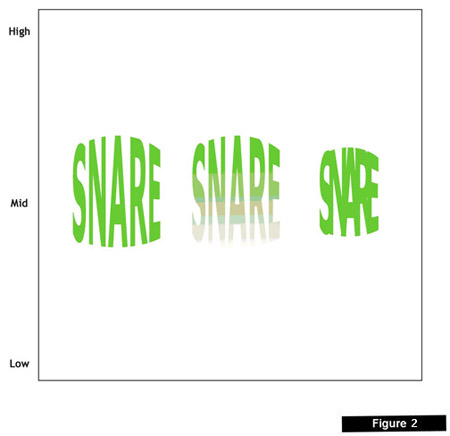 On the left is a representation of a snare drum that has been miked up in standard manner – a single mic above the top skin. In the middle is the same snare with a high-pass filter applied, as indicated by the fade (which denotes the gradual reduction in the lower frequency content). On the right is the same snare after compression has been applied. In this instance the compressor is limiting not just the dynamic range of the snare (which is difficult to depict in a static image) but also it’s frequency content, resulting in a tighter and punchier sound at the possible expense of some of the finer detail.

Now that we’ve established a simple way to visually represent the different sounds, and the ways in which we can affect them, let’s take a look at a full drum kit. The kit as a whole has the widest frequency range of just about any instrument (with the possible exception of the pipe organ), from the low thud of the kick drum to the fizzy sparkle of the cymbals.

It comprises multiple elements that all need to be miked up in a way that enables us to treat each individual sound in relative isolation such that when they are combined, they complement each and work together as a whole. If we take a standard four-piece drum kit, miked up in a standard way (i.e., a single mic on each drum with a pair of overheard mics), and just bring up all the faders, it might “look” something like Figure 3. 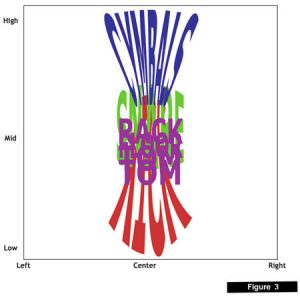 I’ve now added panning information to the horizontal axis to denote the positioning of the sounds within the stereo field (at the moment everything is panned centrally). The one thing that this depiction makes obvious is the clutter that occurs where the sounds overlap each other, particularly in the mid range where the kick, snare and toms all produce sound energy.

This is a common cause of “muddiness” in the drum mix – something which can quite easily be addressed with a little EQ and panning (Figure 4). Here we can see that a bit of EQ has been used to bring the bottom end of the kick drum out, the kick has also been compressed and a low pass filter has been applied. The snare has also been compressed and a high pass filter has been used to tame the lower mid energy. The toms have been EQ’d and panned to create some space for the snare and mimic their physical placement in the kit. The cymbals (or overheads) have been high passed and panned wide to give the top of the kit a nice sense of width. 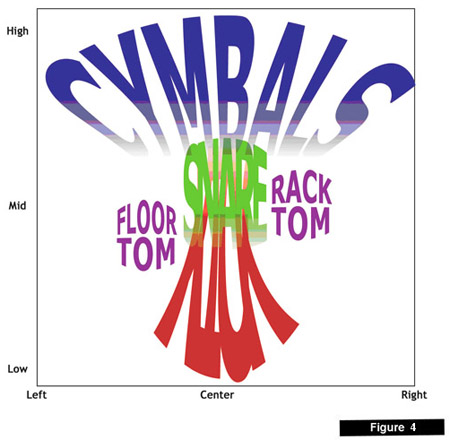 Overall you can quite clearly see that the processing, while quite subtle, has created space for each individual element of the kit so they can be clearly heard but also so they work together and complement each other. This avoids the muddiness that can so easily bog down the drum sound and gives the kit the clarity and definition that will help it to sound good, even in the busiest of mixes.

Speaking of which, let’s take a look at other common mix elements in the form of a simple three guitar set-up, i.e., bass, rhythm and lead guitars (Figure 5). 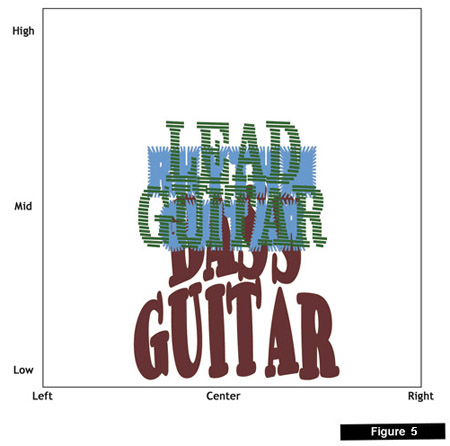 This depiction shows the potential for a messy sound in the lower mid range where all three instruments produce energy. We can also clearly see the masking that commonly occurs when the fundamental frequencies of the guitar overlap and obscure the harmonics of the bass.

Guitars also tend to have a pronounced low end as a result of the use of directional microphones in close proximity to speaker cabinets which exacerbates the proximity effect. Thankfully this can all easily be fixed with high-pass filters and a little panning (Figure 6). 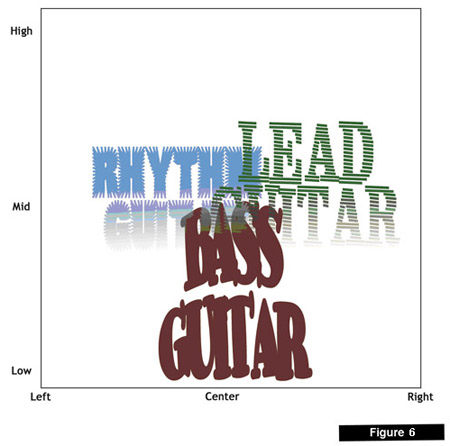 First, the bass has been compressed, which helps tighten it up and enables it to rumble away at the bottom of the mix without jumping out or dipping down. The guitars have been high passed and panned, which not only creates more room for the bass but also helps them to come across much more clearly. This may result in the guitars sounding slightly thin when listened to in isolation, but when combined with the bass, both instruments will come across much better while complimenting each other nicely.

Andy Coules is a sound engineer and audio educator who has toured the world with a diverse array of acts in a wide range of genres.
All Posts
PrevPreviousNew Rio3224-D2 & Rio1608-D2 Dante Network I/O Racks From Yamaha
NextShow And Tell Mixes Festival International de Louisiane With Allen & HeathNext
Study Hall Top Stories
Explore All Study Hall