Innovation and ingenuity at the heart of new sound reinforcement for the site of the Kentucky Derby since 1875...

Churchill Downs in Louisville, site of the Kentucky Derby since 1875, received a significant sound reinforcement system upgrade in time for the 2014 season to accompany the addition of the largest 4k video board (171 by 90 feet) in the world.

Unlike baseball and football stadiums, the grandstand at Churchill Downs has seating tiers that are stacked vertically, straight up and down. In addition, various expansions over the years have added sections on either side of the historic “twin spires,” and all of these sections have slightly different profiles. Further, there are varying ceiling heights, seating depths and column spacing.

It’s a unique situation requiring careful planning, and unfortunately, Churchill Downs did not have CAD drawings of the facility. Further, PDF drawings provided to Marsh/PMK trickled in over a period of weeks, and none were to scale. Tim Lindstron and Melvin Saunders of the sound team worked together on a solution.

Lindstrom used dimensions obtained during the initial site survey to create re-scaled PDFs, while Saunders took to Google Earth to confirm/correct the dimensions and then created a SketchUp model of the grandstands. The SketchUp model was then imported into EASE, which allowed Dave Stearns of Encompass to get into the detailed loudspeaker design. 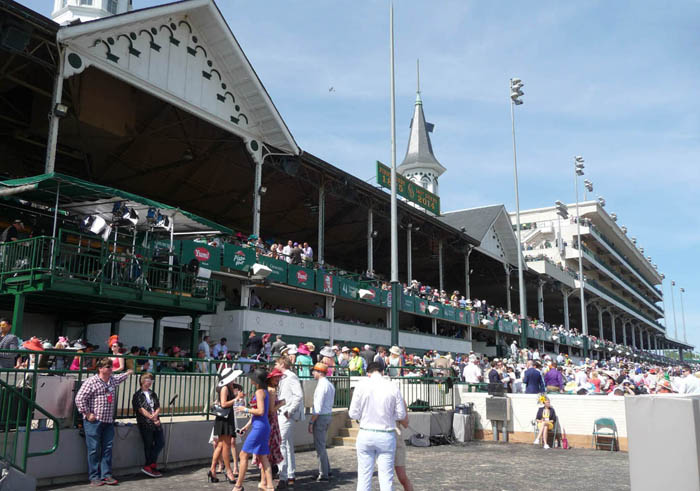 A view of the venerable Grandstand filled for this year’s Kentucky Derby.

Two basic cluster types alternate along the length of the grandstand, just under the front edge of the Level 300 ceiling. There are nearly 60 clusters in total.

The first type includes a Danley Sound Labs SH50 Synergy Horn long-throw loudspeaker and a companion TH212 subwoofer. The SH50 covers seating in front of the grandstand building all the way out to the edge of the track. The second type utilizes Danley SM96 compact loudspeakers to provide near coverage in between the horizontal cut-off angles of the SH50s in the adjacent clusters.

Both cluster types also include a rear-firing full-range Danley SM60F aimed toward the top of the Level 300 seating tier and a “more-or-less down-firing” SM96 with its woofer removed. 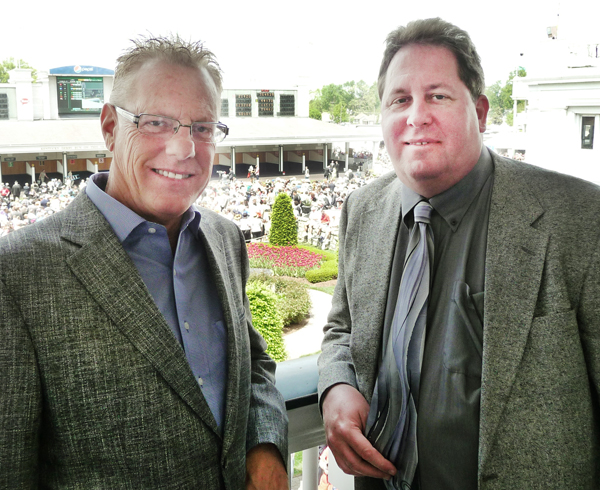 “Danley had slightly greater vertical coverage patterns in similar box sizes [to those of the other manufacturer considered for the project], which allowed us to modify our design to use one less box per cluster,” notes Dave Marsh, owner of Marsh/PMK. “That would ultimately be a cost savings. And Danley emphatically stated that the boxes would be delivered on time and that sealed the deal. They made good on their promise.”

Renkus-Heinz and QSC Audio loudspeakers were re-purposed and added as necessary to improve coverage on the “porches” in front of upper level suites and in other areas. Existing Community loudspeakers were also re-purposed and added as necessary on poles to cover seating that extends beyond the building as well as the track infield, the entry plaza and the paddock area. The existing QSC Audio Q-Sys DSP, networking and routing infrastructure was expanded to handle the new requirements, accompanied by increased QSC power amplification.

“Re-use of existing equipment where possible was a goal of our design, but Danley now provides the major audio horsepower for the grandstands at Churchill Downs,” Marsh concludes, claiming no pun intended.