Ahead Of The Game: Console Strategies For Festivals

The goal of the mix engineer is to be as prepared as possible, particularly when it comes to working with the console. Spring is nigh…

Mixing at festivals – good times! Or is it?

Anyone who has worked as either a guest mixer or system tech in a festival environment probably has stories about the inherent ups and downs and, certainly, the hyper pace and stress that are part of the gig. And we’ve all heard a few horror stories of artists hitting the stage patched incorrectly or without a sound check.

But there’s also the unique thrill of mixing in a hyped environment with tens of thousands of fans on hand, and sometimes in really cool outdoor settings. The goal of the mix engineer is to be as prepared as possible, particularly when it comes to working with the console. Spring is nigh…

It’s been common for years to see multiple consoles “leap-frogged” between acts, allowing one or more offline consoles to be dialed in while another is live. They may be switched over by the system engineer or sub-mixed to a master console, and in the latter case, gain structure or ground loop hum/noise issues can pop up between consoles.  Carrying in-line pads and audio isolation transformers is always a good idea.

Digital consoles have obviously changed the workflow at festivals by allowing preset show files to be prepped and uploaded, which helps in terms of establishing baselines and promoting efficiency. Premium analog boards may still be carried by certain headliner acts, but they’re usually not shared.

Whatever the console(s) in use, advancing the date is still the most important step in a successful gig. Even the best system techs can’t prepare properly if they don’t have enough information in advance. Further, even when this info is available and shared ahead of time, it’s still wise to arrive at the gig with a copy of the stage plot, patch list, input list, and whatever else is important to the production.

Having mixed at plenty of festivals and other multi-act events, I’ve developed a number of personal preferences and strategies. And I’ve observed that the balance of science versus art that we know as “live mixing” tends to weigh heavily toward the science side when the “run-and-gun” mode common to festivals kicks in. After all, things just have just work, first. 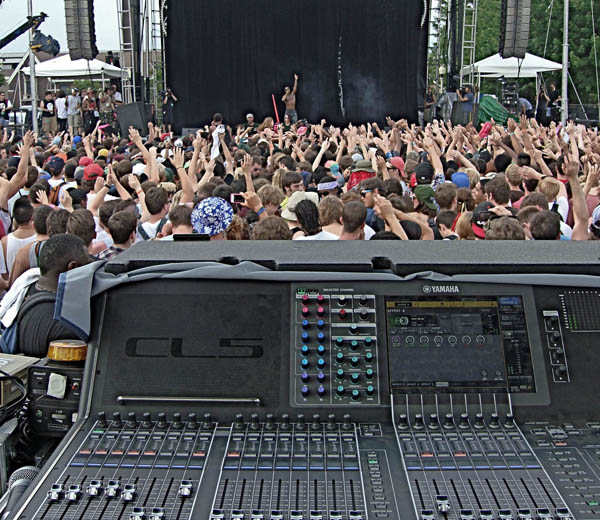 A Yamaha CL5 provided by Gand Concert Sound to serve as the house console at the annual Pitchfork Music Festival in Chicago.

But as veteran freelance mix engineer Chris McMillan (John Mark McMillan/Promenade Media) told me, “Mixing is much better when the art takes priority over the science, and that means ergonomics can determine how nuanced your mix becomes. I like channels grouped the way I’m used to so that I see what I need and never know anything else exists.”

This is where festivals are so different than tours. Touring engineers get very used to their daily setup being consistent, and can take advantage of that repeatability to achieve highly detailed mixes. System techs that aren’t mixers should try to keep in mind that mix engineers aren’t always crazy or unrealistic when they want their console laid out a certain way.

It’s about familiarity. It really does matter if the lead vocal gets patched to the rack tom channel. Things like this can be dealt with in a pinch, and maybe quickly, but they can impact the end result by either causing a failure or a compromised (weaker) mix.

In talking with Chris and a couple of other festival mixing veterans, and thinking about my own experiences, certain themes are clear. Mix engineers desire a “perfect” console setup and the ultimate processing tweaks to satisfy their mix plans. But when working festivals, they do realize that it’s a daunting task to support many acts a day as opposed to one artist on multiple tour dates. As a result, they just hope for a reasonably well-tuned PA, a thoughtful system approach, solid gain structure, and an intelligent output bus layout.