You Make Music You Say? So, You’re In The Fashion Industry

Inside the evolution and development of sounds through the decades that have become marketable commodities.

The sound of popular music can be clearly compared to other forms of seasonal commodities such as clothing fashion and hairstyles. Much as bell-bottoms, the hula-hoop, and whitewall tires have become fashion statements associated with certain times past, “the sound” of most records will in later times provide a key identifier in time stamping that music.

Like fashion, some of these sounds periodically re-emerge; some become an ongoing fabric of music production, while others are never heard of again. We live in a time of interchangeable parts; music is in an advanced state of industrialization, where mass produced components are used and reused in everything.

The 1990s was the re-decade of reissue, review, reflection, reuse, repurpose, and reprocess. Déjà vu was the prevailing vu for most of the population. The vast reissue on CD of long-lost catalogs has allowed all previous decades to be available in our time.

Today’s record producers have the texture, style and tone of all previous decades to draw upon. Many records today have some production aspect or sound taken from the past – the sound of nostalgia. Songs and fragments of songs from the past in the latest music stimulate the recollection of countless personal histories.

As in any other commodity/consumer paradigms, consumerism and commercialism drive this thirst for new sounds. The predominately young music consumer seems to have a never-ending appetite for what is new from the music industry because it defines them as different from their older sister, their younger brother, their parents, all other generations. 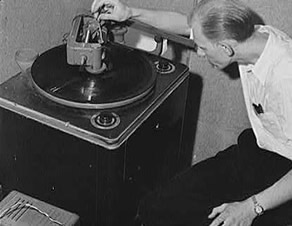 Unlike the fashion industry, where styles are seldom worn past their season until a generation later when they may be rediscovered, greatest hits collections and classic albums from every period remain part of the active playlist of life.

In fact, the greatest hits of any year will be on the market by mid-year and blasting from every radio during end-of-summer long weekends. These recordings form sonic postcard collections of memories good and bad.

Before records were invented and technology’s impact on music production, musical passages and phrases, a good story, a singer’s performance, and a memorable chorus were the primary identifiers of a pop song. They remain important, but these “hooks” now include “the sound”.

Those in music production often refer to the sound of a recording separate from the song. A recording can have a good or unique sound that catches the public ear and at the same time the song may be inconsequential.

As Dick Clark once commented “(the sound is) what the kids listen for… the more different, the more original, the more unique the sound is, the more chance a record has of becoming a hit”.

“The sound,” in many cases, could be described as a formula that in and of itself is a marketable commodity that is, in the first instance, sold by a producer to the record label.

The ingredients, which make up this formula, come together as new devices become available and naturally enough each subsequent wave of music producer builds on and modifies earlier formula. Often they are so identifiable with the state of the technological art of the time that the trained ear can place the year of production based on the sound.

Geography plays a part in identifying styles. At various times a swarm of hits will emerge from a certain geographical region where there is a vibrant scene and a community of musicians.  Their collective style becomes identified with that place.

Sound and music became a commodity incrementally starting at the beginning of the 20th century when records first captured and fixed a performance. It took a second leap when electric recording first appeared in the late 1920s, and another when tape recording was developed in the 1940s.

But the greatest leap occurred when Les Paul changed the recording studio from a place where a performance was documented to a place of creation. He was the first to use the technique of “sound on sound” or overdubbing, a cornerstone of the modern pop music sound, and was years ahead of what has become common practice.

Using this technique, Les Paul teamed up with vocalist Mary Ford and they changed the way pop music sounded. Together they had 28 hits from 1950 to 1957. The best known are “How High The Moon”, “Mockin’ Bird Hill”, “Vaya con Dios”, and “Tiger Rag”.

By and large, The music industry of the day saw multi-track and the “overdubbing” technique as Les Paul’s sound, and not a general tool for music production. In the early 1960s, the Beatles and The Beach Boys would change all that.

The “Les Paul” sound was a production technique that become a bankable commodity. Such techniques are often associated with sounds that people have never heard before.

In the 1950s, Ross Bagdasarian had been making records as a songwriter and arranger. He had a particular knack for writing novelty songs, and in 1958, had a hit with “Witch Doctor” in which he sonically conveyed a shrunken head singing by recording the vocals at half the tape speed used to record the instruments and then playing it all back at normal speed. The singing went up in pitch by an octave.

Later that year, he invented an alter ego, David Seville, and introduced a vocal trio using the technique as on his earlier hit. “The Chipmunk Christmas” sold 3.5 million copies in five weeks, and from 1959-80, Alvin, Simon and Theodore made eight chart albums selling over 30 million copies.

Tom Lubin is an internationally recognized music producer and engineer, and is a Lifetime Member of the National Academy of Recording Arts and Sciences (Grammy voting member). He also co-founded the San Francisco chapter of NARAS. An accomplished author, his latest book is “Getting Great Sounds: The Microphone Book,” available from Amazon and a range of other sources.
All Posts
PrevPreviousProduction Sound Mixer David Thirion Employs DPA 6000 Series For “Parlement”
NextVideo: The Top 5 Highlights On PSW — March 20, 2020Next
Top Stories
Explore All Study Hall