Tucked in the foothills 50 miles southeast of Florence, the 13th-annual Mengo Music Fest in Arezzo took place this past July. Sinergie supplied a VUE Audiotechnik-based system to support more than 30 Italian, European, and international indie-rock and electronic acts performing over the course of the four-day, free music festival. Headliners included The Zen Circus, Fast Animals and Slow Kids, Levante, and Salmo.

Breaking from their prior system, show organizers tapped Sinergie Group, to provide PA and stage monitor support using a VUE al-12 based system. According to Livio Spallino, Sinergie’s experience using VUE with the headline acts made their engineers, and the resident sound technician’s decision to switch to VUE clear.

“We have worked with the main acts and their crews before, and they all know and now prefer the VUE system’s sonic signature. Megno is more than just a festival – each artist and engineer sees their performance as a contribution to Italian music history. So when the chance to have VUE in the festival was real, everyone voted yes,” explains Spallino.

The Mengo festival presented a number of difficult challenges for the sound system including preventing sound spilling beyond the festival grounds, as it’s just a stone’s throw from historic Roman ruins in the middle of Villa Alfieri park. In addition, the system needed to be capable of dealing with a very wide range of musical styles and a 300 kg (661 lbs) hanging point weight limit. 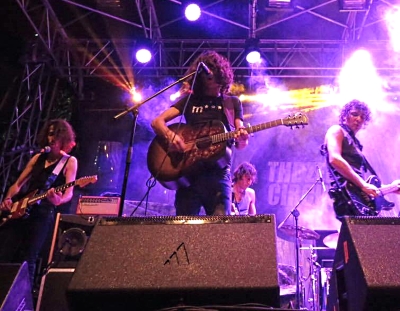 “We knew we needed versatility with incredible precision for this event, yet with power and sonic accuracy,” explains Spallino. “The local parks authority required we limit the system throw to 30-meters from the stage, yet all bands, in spite of very different musical styles, asked for a large PA. From the very beginning, we knew that VUE could deliver on all fronts.”

“It was nice to have consistent sound pressure across the listening area — that’s not easy to get with a band with very diverse dynamics,” says Andrea Marmorini, front of house engineer for Fast Animals and Slow Kids.

“I immediately found what I was looking for, great coverage and great sound pressure while maintaining care and accuracy in detail,” said Simone Squillario, front of house engineer for Salmo.

“With the hm-212 on the stage, the vocal is always present and definite, without losing its rhythmic parts and deep in the lows, practically a personal PA for musicians,” raved Francesco Felcini, monitor engineer for Fast Animals and Slow Kids.