Now in its sixth year, BottleRock is a three-day music festival that hosts some of the most popular touring musicians at the Napa Valley Expo Center in the heart of California’s Wine Country. In addition to three days of music, the festival features gourmet food vendors from many of the region’s most celebrated restaurants and a culinary stage with numerous special guests.

Held over Memorial Day weekend from May 25 – 27, VUE Audiotechnik was back for its fourth round with the festival. Delicate Productions once again provided full production services for the event, including a complete PA from VUE on the Miner Family Winery stage.

The main front of house system consisted of two CST arrays, each with eight large-format al-12 elements; while 16 hs-221 dual 21-inch Infrasonic ACM subwoofers were positioned along the front of the stage in five groups of three units each. 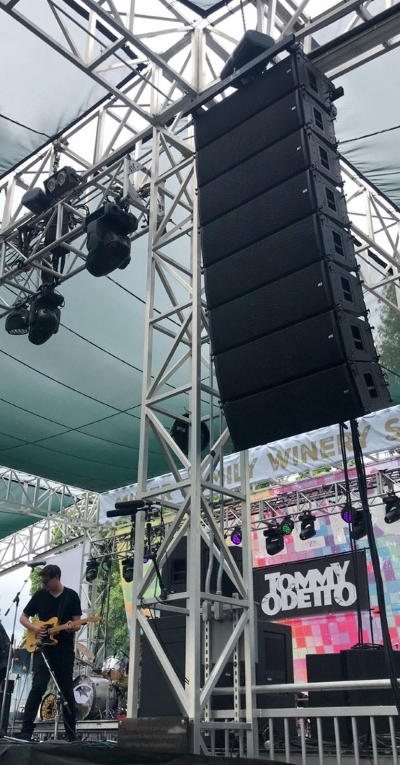 DSP from the integrated VUEDrive electronics allowed the complete array to form a virtual arc, which maximized low-frequency consistency throughout the listening area. Rounding out the system were VUE hm-212 and hm-112 stage monitors to make a 10 mix stage full back.

The drum fill consisted of hs-25s and hm-112s, while h-15 two-way boxes sat atop hs-28 subwoofers to deliver side fill. The stage’s VIP section was complemented with h-12’s on sticks. A VENUE Profile console served front of house duty, while a Yamaha PM5D handled monitors.

“This was hands-down the highest-profile lineup of any BottleRock yet,” explains Delicate’s president, Jason Alt. “And the al-12s consistently impressed visiting engineers with their almost limitless headroom, sonic quality and overall punch.”