The Best Place To Put Subwoofers Is… ?

The most common answer is to put them on the floor. But is it always true?

“Subwoofers should be located on the floor if at all possible.” This is one of those classic bits of audio “conventional wisdom.” I hear it from system operators on nearly every project.

But is it true?

If we look at the physics of sound, we learn that, as with most things in the world of audio, “it depends.” So let’s start by discussing why the floor might indeed be a good place to put subwoofers.

Placing any loudspeaker against a large plane (relative to wavelength) produces a half-space loading condition, meaning that all the energy radiating spherically (equal energy in all directions) from the loudspeaker is now being radiated into a hemisphere, or half the area. This results in a 6 dB increase in energy radiating into the hemisphere, the same increase that happens by doubling the number of subwoofers.

If the subs also happen to be very close to a vertical surface, say, a tall stage face, another quarter space loading is the result, producing as much as another 3 dB (assuming the stage face is a solid surface); in other words, again, another “doubling” of the number of subs.

How about inverse square law? You know, the one that says for every doubling or halving of distance from the source, there is a 6 dB change in level (outdoors)?

At some live shows, listeners might be as little as 10 feet away from subs on the floor, while the farthest listeners might be 200 feet away. Let’s say your mix position is 100 feet from the subs. If the subs are hitting 100 dB SPL at the mix position, then the front row is getting about 120 dB while the last row is getting about 94 dB. That’s a 26 dB change in level from the front row to the last!

Of course, the difference wouldn’t be this great indoors, but it will still be uncomfortable for the first few rows of listeners.

Now let’s consider crossover points. With the subs on the floor, we have two sources (the mains and subs), reproducing the same content, that are separated by quite a large distance.

Let’s say the mains are flying at about 25 feet above the subs. What’s going on around the crossover point?

The first task is synchronizing the arrival of the subwoofer sound with the mid-high sound. For the front row, the subs need to be delayed about 13 milliseconds (ms) to be in sync with the output of the mains.

So who gets the good sound?

This physical offset affects system alignment resulting in anomalies in frequency response around the crossover point as well. Any loudspeaker array in which there are two or more spaced sources reproducing the same sound produces a dip in the polar response in one or more directions, based upon the frequency and the physical spacing of the sources.

That’s a mouthful, so here’s the bottom line: the listeners at each of our positions will get different frequency response in the form of dips around the crossover point. 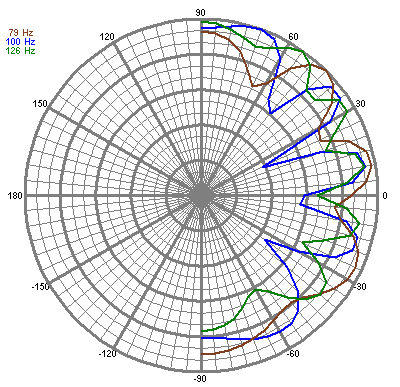 Let’s do a little modeling the see what happens. Figure 1 is a vertical polar graph of a mid-high loudspeaker flying at 25 feet high and a subwoofer on the floor around the 80 to 125 Hz range around the 100 Hz crossover point.

I don’t think anyone wants this kind of polar performance! And what does this mean to the listener? 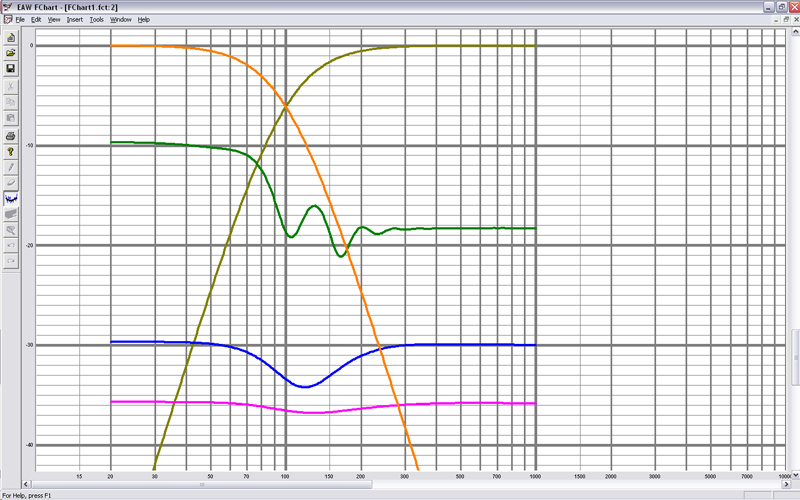 Figure 2: Functional drawing of a basic SLM (click to enlarge)

The first thing we notice is the difference in levels between each of our listener positions.

Second is the difference in level between our mid-highs and our subs at the 10-foot listener position (green trace). (Remember why?)

The third thing to notice is the frequency response anomalies around the crossover point of 100 Hz and how it differs at each listener position.

This is a result of the mis-alignment of the subs and the mid-highs.

So can we fix it with delay?

If we add 13 ms of delay to the subwoofers (Figure 3), then the response through crossover smooths out at the 10-foot listener position.

But notice that response at 100 feet and 200 feet got worse! 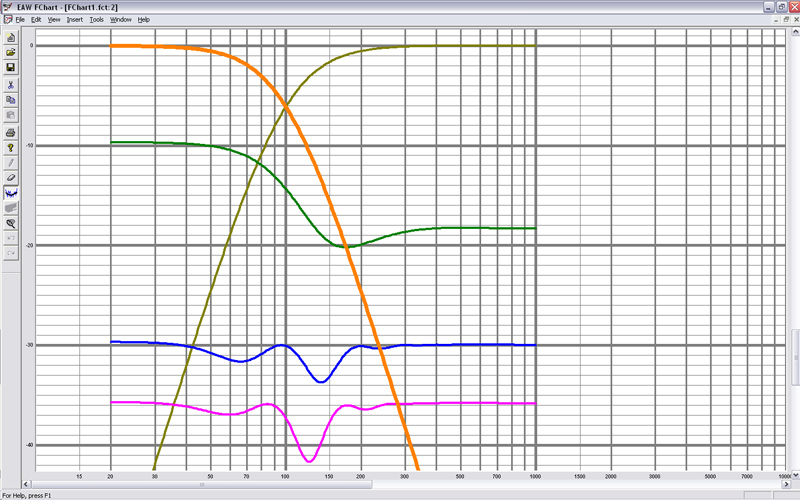 O.K., let’s assume adjustments to this based upon what the sound person is hearing at the mix position (100 feet away). Figure 4 shows the result of that alignment. 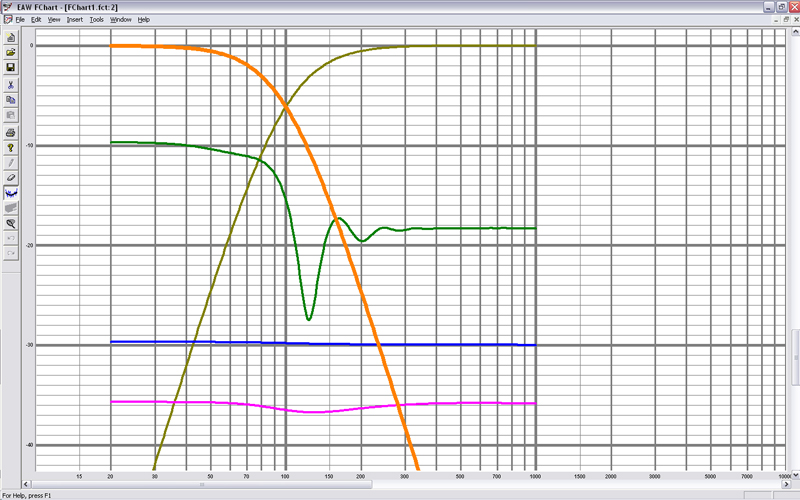 Nice! That blue trace is exactly what we’re looking for through crossover, but now look at the front row response.

The point is that it’s not possible to fix fix physical offset anomalies for all listeners in the audience area. The system can be optimized to sound great in one relatively narrow band of seating across the room, but the majority of the audience will get something between the pink and green traces.

Now let’s try flying the subs with the main loudspeakers. We’ll mount them at the same 25 feet elevation and about 4 feet behind the mains.

Figure 5 shows us our polar response before performing alignment…

…while Figure 6 shows the resulting frequency response at our three listener positions. 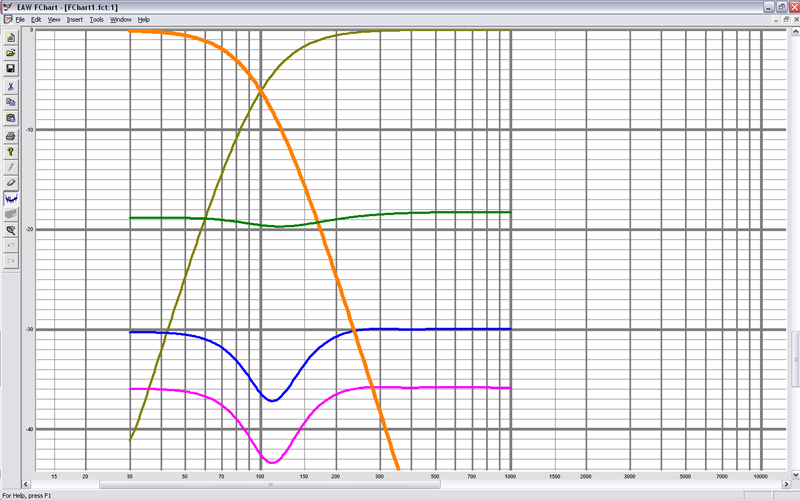 This already looks better. The vertical polars do not have the big nulls that happened with the subs on the floor, and the frequency response in the three listener positions is more similar.

Now let’s add some delay to the mains to align arrival times. Figure 7 and Figure 8 show a vast improvement in vertical polar performance.

As well, an improvement is seen in balance between the subs and, mains at the 10-foot listener position, and very smooth frequency response through the crossover at the 100 feet and 200 feet positions. Maybe it would be better to fly those subs? 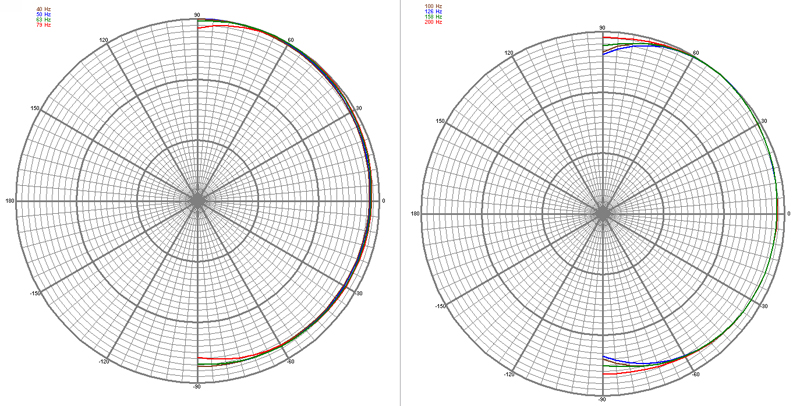 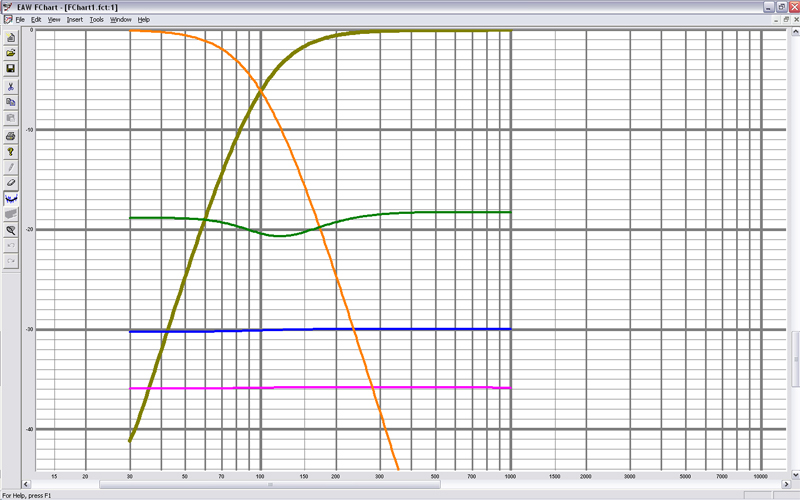 On a side note, should the subs be split left and right? This can create a “power alley” as shown in Figure 9.

As you can see, the horizontal polar response has nulls all across the room in different locations at different frequencies.

Maybe the better solution is to fly them in a vertical stack in the middle. In Figure 10, the subs are stacked vertically, producing far more smooth horizontal coverage.

So, back to the original question: Is the floor the best place to put subwoofers?

When ground stacking the entire system, sure! It keeps the physical offset to a minimum, and while there is still the inverse square law problem, at least it will be a consistent problem across the whole frequency range.

But if flying the mains, then it makes a lot of sense to fly the subwoofers as well. It might require more subs, but the latest crop of very high output and/or highly efficient subwoofers on the market lessens this need. I would also suggest deploying some sort of low-frequency directional array to keep the low-frequency energy going to the audience, not the ceiling.

But that’s a topic for another day…

Jerrold Stevens has more than 30 years of experience in the audio industry, including contracting, independent sales representative, live sound and studio engineering, and audio system consulting and design.