Following a string of chart-topping solo albums, including his Grammy-nominated 2017 LP Flower Boy, Tyler the Creator’s latest album Igor debuted at No. 1 on the Billboard 200 chart this past May. In preparation for the arena-sized venues he will perform at during his fall IGOR tour, which kicks off in September, the rapper, songwriter and producer hired playback engineer Taylor Wright — who has worked with Panic! At The Disco and Adam Lambert — to build a reliable playback rig.

The rig ensures an extra level of dependability and redundancy using two Digiface Dante interfaces, RME‘s low latency solution for sending up to 64 channels of Dante digital audio into and out of a computer.

“Whenever you’re doing shows of this caliber and size, you always want to make sure that you have as many points of redundancy as possible,” Wright says. “You have to have all your bases covered.” 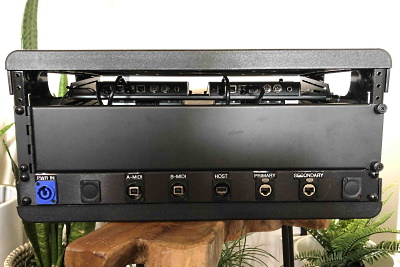 “The A-unit Digiface Dante sends a tone to that additional switcher, and if the tone is dropped, it will automatically switch over to the B-unit,” Wright says. “Essentially, in doing this setup, it’s like there are four levels of redundancy, because the additional switch serves as a switcher between the two Digifaces. So, if — for whatever reason — you have a cable failure or some sort of problem with your primary network, it will automatically switch over to the secondary network.”

Tasked with the responsibility for making sure the studio equipment used to produce Tyler the Creator’s latest album will be replicated in each performance next fall, Wright had to adapt his usual analog playback engineering sensibilities to the front of house engineer’s preference for Dante.

“Before I built the new rig, they were using Dante Virtual Sound Card software and going out of the computer via an Ethernet bungle,” Wright says. “The front of house engineer is very knowledgeable with Dante and that’s what he preferred to use. So, when I was brought in, he specifically wanted me to build a rig that was Dante, because the front of house rig and the monitors were already configured for it.

“A lot of front of house engineers are interested in going in the Dante direction, moving forward. I know a lot of audio engineers who think the technology has come a long way, and has gotten more stable, so a lot of people are starting to embrace it.”

While Wright has not previously used RME equipment on the analog playback rigs he has built for other artists, he was drawn to the Digiface Dante when it came to building this rig because of RME’s reputation for reliable performance, as well as its smaller form-factor.

“I really wanted to use the RME Digiface Dante because I’m a big fan of the RME brand’s reputation, and I know the components are really high quality,” he says. “I have several colleagues that I work with doing playback, and I have heard great things about RME for a really long time. The drivers are extremely stable, and all the gear is really well made. While there are a few other interfaces that are Dante compatible, I was drawn to RME based on what I’d heard from other playback engineers, and because they’re also quite small. You can fit two side-by-side in one rack space — so they’re both very compact and very powerful.”