Setting The Standard: Delivering The Sonic Experience Of The Pixies

The Pixies are a phenomenon, and a rare long-standing one at that. Formed in Boston in 1986, the alternative rock quartet has set a standard for truly compelling modern musical performance, one that’s still going as strong today as ever.

Over the course of more than three decades, they’ve inspired a mind-boggling number of “who’s who” artists, including U2, David Bowie, Radiohead, Alice in Chains, Arcade Fire and plenty of others. Further, the late Kurt Cobain credited the Pixies with influencing Nirvana’s seminal “Smells Like Teen Spirit,” telling Rolling Stone magazine in a 1994 interview, “When I heard the Pixies for the first time, I connected with that band so heavily I should have been in that band – or at least in a Pixies cover band. We used their sense of dynamics, being soft and quiet and then loud and hard.”

Following a break-up in the 1990s, the band reunited in 2004, with bassist Lenchantin becoming a permanent member in 2016. Through it all, hallmarks remain Black Francis’ poignant songwriting and the signature musical style that can instantly move from restrained to explosive.

We recently caught up with front of house engineer Miles Wilson and monitor engineer/crew chief Matt Jones following the Pixies’ latest tour, which visited venues ranging from larger theatres to more intimate clubs. Both have been working with the band for more than a decade, and they were accompanied on the road by team members Jamie Harris (PA and monitor tech), Duncan Swift (guitar tech), and Paul “Chumpy” Knowles (drum and bass tech).

Wilson got his start on the recording side of the equation, attending the Los Angeles Recording Academy and then joining Sound City Studios in LA. Not long into his tenure, he noticed the forming winds of change. “I could see pretty clearly that the writing was on the wall with the future of the recording industry, so I kept an eye out for a chance to transition to the live side of audio,” he explains.

That opportunity arrived when Black Francis (Charles Thompson) came to Sound City to do some recording, with Wilson, who was a “runner” (support staff position) at the time, promoted to assistant engineer for the project. “This was one of my first experiences in a hands-on role in a real control room, and it was eye-opening to say the least,” he says. “It was also a great opportunity to be able to work with someone I admire.”

The project only lasted a few weeks, but the two stayed in touch and three years later, Wilson received a phone call from Pixies management telling him that the band was reuniting for a tour and inquiring if he had interest in serving as the guitar tech. While he would have rather been behind a mixing desk, it was still the break he was seeking to move into live sound, so he readily accepted the position.

A couple of tours as guitar tech ensued, but when Black Francis would go out on solo dates, Wilson began mixing monitors and eventually moved along to front of house. Not having come up though the live world, he notes that at first, it was all a bit daunting, dealing with issues such as feedback, but he quickly grew accustomed and had enough musical experience to help work though any growing pains.

Over the next few years, he focused on broadening his knowledge and “chops,” and while on a subsequent Pixies tour, Ray Furze, the band’s noted front of house engineer, fell ill. “This was at about 5 o’clock on a show day, and I was given the nod to fill in,” Wilson says. “We were in Amsterdam at an 5,500-seat venue, there was no sound check, and I hadn’t used the console before. 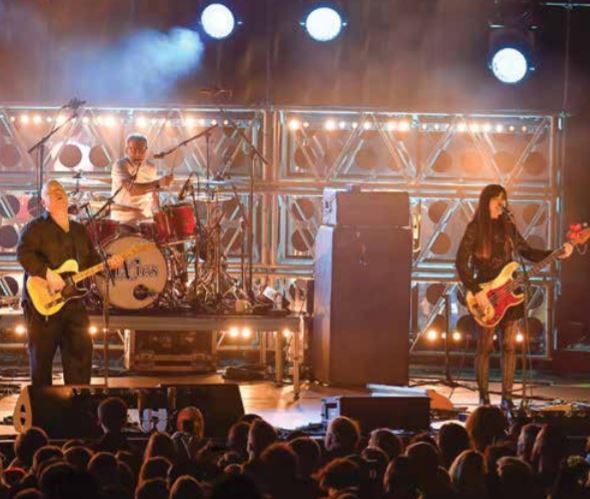 “So I just went with it,” he continues. “The band came out and started playing, and it took me about a song to get things dialed in, and we moved forward from there. There were a few more shows on that tour, and then we did a U.S. run. Ray came back into the fold and we did a tag-team, and eventually he retired. This was in 2012, and I’ve been in the role ever since.”

Based in the UK, Matt Jones has held system tech as well as front of house and monitor engineer roles in a diverse career of 20-plus years and counting. He’s handled the monitor side of the equation with the Pixies for more than a dozen of those years.

After graduating from University of Salford (Manchester), Jones immediately commenced working as a free-lance engineer and tech, including extensive touring for leading sound company Wigwam (Heywood, England) with a wide range of artists. “It was a big mixture of musical styles and I had a lot of different roles,” he notes, adding that these experiences helped him to be well-prepared when the occasion to work with the Pixies, via Wigwam, arrived in 2005.

Keith has covered professional audio and systems contracting for more than 25 years, authoring hundreds of articles in addition to hands-on work in every facet of publishing. He fostered the content of ProSoundWeb (PSW) from its inception, helping build pro audio’s largest portal website, and has also served for several years as editor in chief of Live Sound International (LSI).
All Posts
Top Stories
Explore All Study Hall