The CL5 is the largest model in the new Yamaha CL Series of digital consoles.

The line-up comprises three consoles, the CL1, CL3 and CL5, all founded on the company’s Centralogic interface and ranging in scale from 48 to 72 mono plus eight stereo inputs.

CL Series consoles can act as stand-alone units and feature on board inputs and outputs as well as the ability to utilize up to three mini-YGDAI I/O cards to expand the number of inputs and outputs, and they also work in tandem with the new RIO rack mountable I/O units.

The RIO3224-D offers 32 inputs and 16 analog outputs plus four stereo AES outputs, and the RIO1608-D features 16 inputs and eight outputs. The consoles connect to the remote stage boxes via Cat-5e or Cat-6 cable and run on Audinate’s scalable Dante network.

The Yamaha CL5 in the author’s shop. (click to enlarge)

The Logistics
The top surface of the CL5 has two angles – a flat section where the faders and most controls are located, and an angled back section that houses the screen, meters, USB port, as well as the user defined knobs and the selected channel controls.

The large color touch screen is located in the center of the angled section and the selected channel controls for gain, EQ, aux sends, etc are located directly to the left of the screen.

Four user defined knobs are located directly to the right of the screen. The meters are located to the right. To the left is a large area that can hold an iPad or iPod and features a shelf to keep the phone or tablet from sliding down. 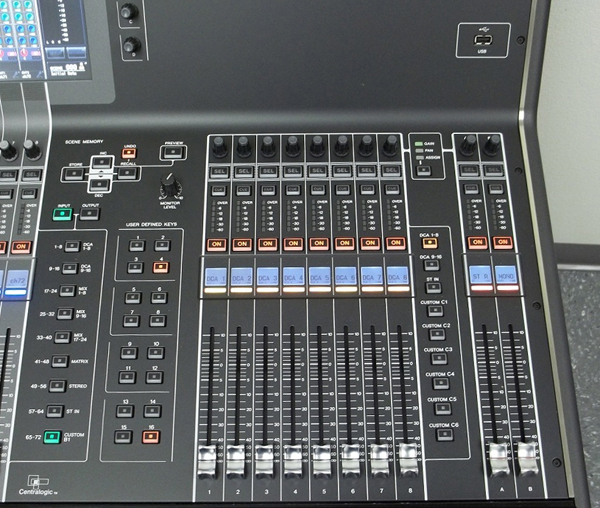 A look at the clean layout of the right side control surface. (click to enlarge)

The flat control surface features a Centralogic control section in the center that offers eight faders, each with an ON, CUE and SELECT button, meter and rotary knob. Nine function buttons to the right of the faders allow the operator to select between inputs, DCA, Mix, Stereo, Matrix or Custom layers.

The scene memory section and 16 user-defined keys complete the center section. To the left are two channel banks each with fader, ON, CUE and SELECT button and meter. Each fader also has a rotary knob that can be selected in banks to control the GAIN, PAN or assigned to a parameter. To the right of the channel section are button to choose layer for the channels, Stereo inputs, DCAs, or Custom layers.