Evaluating a Danley Sound Labs high-pack/subwoofer combo in the field.

The Danley TH-Mini is a compact subwoofer that uses a single 12-inch driver in a tapped horn configuration.

As I do with all new gear, I set up an SM-60F to try out before taking it on a show. I drove it with a QSC RMX 2450 amplifier and listened to some CDs full range. (Note that it is also available with a built-in amplifier as an option.)

They sounded great! I noticed detail in some songs that I usually don’t hear on my regular 15-inch, 2-way high packs.

They sound as good if not better than many reference studio monitors I’ve heard. 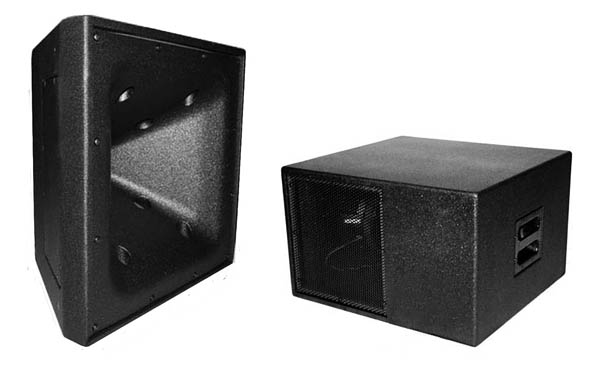 The subjects: Danley SM-60F (left) and TH-Mini. (click to enlarge)

Next up was the TH-Mini, which I drove with a QSC CX1102 amplifier, and crossed at around 100 Hz. It had the walls of my shop rattling with headroom to spare.

I then placed the SM-60F on top of the TH-Mini and played around with the crossover settings to see what sounded the best, running the SM-60F full range with added subwoofer as well as crossing both boxes over.

Both ways sounded good, and would give me more options at gigs.

Stand Note
The only negative thing I ran into during this initial evaluation is the stand mount on the SM-60F and the lack of a pole mount on the TH-Mini.

Above, the bottom of the SM-60F, showing the stand socket, cabinet shape and a nice grill. Below, a view of the Synergy Horn with the grill removed. (click to enlarge)

The stand mount sits toward the back of the cabinet, making it rather front-heavy – in fact, too much for my usual “corporate” speaker stands, which are 50-pound cast iron lighting bases and black pipe. (I prefer these instead of tripods because they look better, and can use taller pipes to get the loudspeakers up higher in the air.)

Too be fair, there’s no way to move the stand mount forward on the box, because an 8-inch driver is in the way.

If I bought these boxes and wanted to use them on stands, I’d make a frame that bolted to the bottom of the SM-60F using the fly points, and locate a stand mount at the center of gravity.

Then I could use them worry-free on any tripod stand or my corporate pipe and base stands. For purposes of this evaluation, I put them on Hamilton metal tripods – with the weight centered over a tripod leg, the stands were stable, and just to be sure I also used sandbags to weigh down the rear of the tripods.

As for the pole mount on the sub, the company can put one in if you ask when ordering.

You can also retrofit it in, but talk to the folks at Danley first so they can tell you a good location on the box so you don’t hit an internal brace.