I remember working at a music store during the portable mini PA “surge” almost 15 years ago. Many manufacturers were offering some type of “sci-fi suitcase transformer system” that was supposed to “blow away” small venues. Most didn’t. In fact, most were downright painful to listen to and definitely not ready for prime time.

Since then I haven’t paid much attention to the mini PA product class, but a recent trip to a trade show found me at Yamaha’s booth looking at products I usually don’t see in my normal routine. Even then, the STAGEPAS portable systems didn’t really capture my attention, mixed in between other toys I wanted to play with.

So when I was asked to review a STAGEPAS 600BT system, I accepted primarily for an opportunistic reason. I’ve been looking for something to cover acoustic performances for about 100-200 people at an outdoor campground stage. Specifically, a lightweight system capable of reasonable output with commensurate sonic quality.

As I looked through the STAGEPAS information on the Yamaha website, everything about it seemed adequate. The specs show a frequency response of 55 Hz to 20 kHz and a stated maximum output of 129 dB. Since “The Who” wasn’t scheduled to play at the campground, I felt that was more than enough to meet our needs. And later I found that the system performs at higher levels than I expected, and with appropriate dynamics and articulation. 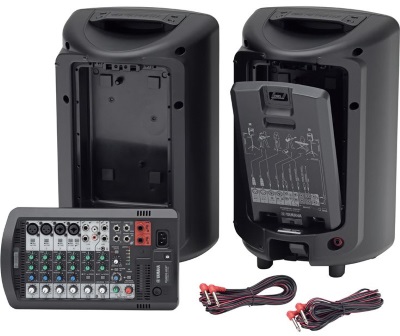 The two loudspeakers supplied with the 600BT model I was provided for this evaluation each incorporate a 10-inch cone woofer and a 1.4-inch voice coil compression driver feeding a waveguide with 90- x 60-degree dispersion. (The smaller 400BT loudspeakers have 8-inch woofers.) The composite cabinets also include a 50-degree floor monitoring angle. The onboard mixer/amplifier provides 2 x 340 watts of audio power to the transducers. 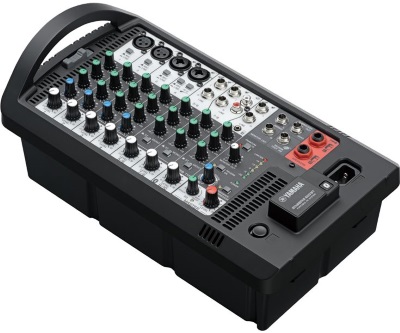 The unique mixer snaps into the back of one loudspeaker, with cable storage in back of the other, so a single person can easily load in, set up, and load out. Grab one loudspeaker in each hand and take a walk.

The entire system weighs in at just 56 pounds (and the smaller 400BT system tips the scales at 39 pounds). The standard “lamp cord” loudspeaker cables (with molded ends) are plenty sturdy for the application; however, the length of 20 feet (6 meters) creates some restrictions.

In use, the Bluetooth feature made the system a hit right out of the gate. I know this isn’t the first portable system with Bluetooth connectivity, it’s just the first one I’ve played with. Firing up the iPad and connecting almost instantly involved the equivalent technical skill of sending a text. In other words, even I could do it.

Erik worked in a wide range of roles in pro audio for more than 20 years in a dynamic career that encompasses system design and engineering in the live, install and recording markets. He also spent a number of years as a church production staff member and Media Director, and as an author for several leading industry publications before joining the PSW team. His latest project is the WYWU: Working Your Way Up podcast. Reach him directly through the contact form at RabunshireMedia.com.
All Posts
Top Stories
Explore All Reviews