Checking out the latest line array technology in action with Switchfoot at House of Blues in Dallas.

Recently, I had the opportunity to attend a demo and concert at the House of Blues in Dallas to check the new Bose Professional ShowMatch DeltaQ array system.

The folks at Bose have made some bold claims about ShowMatch DeltaQ array technology, which is designed to offer substantial vertical and horizontal coverage control to keep sound in the seats and reduce unwanted wall reflections.

The array modules are available with several vertical pattern choices with changeable 70- and 100-degree horizontal waveguides, with panels that allow users to swap one side or both for asymmetrical patterns. Optional accessories include 55- and 120-degree waveguides.

For this event Bose PowerMatch PM8500 8-channel 4000W configurable amplifiers were used to power all of the loudspeakers. These were fed and controlled with a Bose ControlSpace ESP1240 engineered sound processor running a full Dante network between all components.

The flown rig included 14 ShowMatch enclosures, with four more deployed for front fill, along with three RoomMatch RMS218 subs (below) groundstacked on each side of the stage. 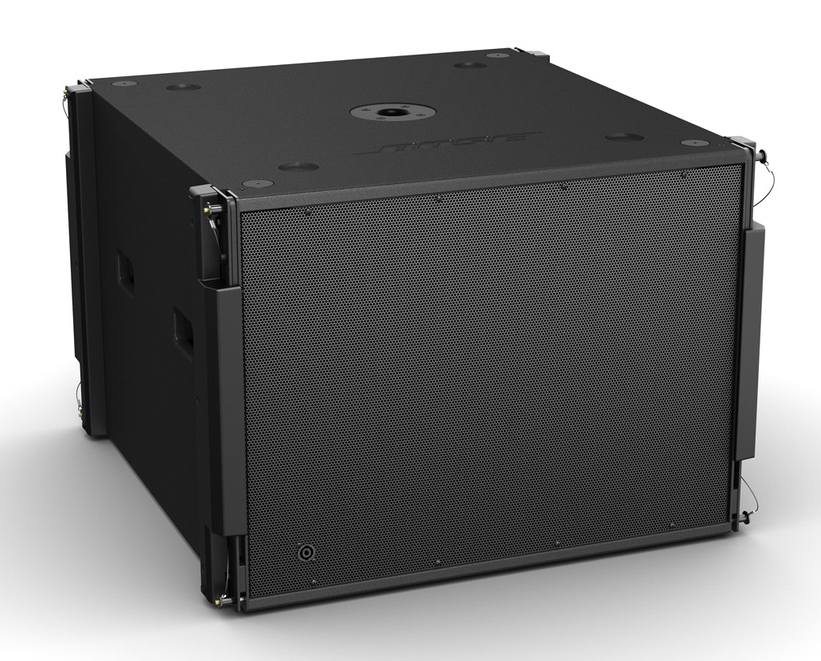 Upon entering the House of Blues, the system was already in place and the crew was sound checking the band, Switchfoot. I confess a certain disappointment that I wasn’t able to witness the rigging or initial system sound before the band’s front of house engineer/road manager Ryan Nichols made it sound like, well, Switchfoot.

ShowMatch is designed with 3-point “quick pin” rigging to support up to 24 boxes, for a 10:1 safety factor. The cabinets are also equipped with removable side rigging-guards or handles which can be removed for permanent installs. This facet reduces the width from 31.2-inches to 29.8-inches (or 79.2 cm to 75.7 cm for every other country on Earth) and simplify visual design.

The ShowMatch SM5 (below) module rigging is made to adjust for longer “throw.” Each 5-degree vertical module allows adjustment of coverage overlap from 0 to 5 degrees to provide longer throw distance for large arrays.

It sounded quite good, even considering that the venue presents a less-than-desirable acoustic signature. Theater-style seating in a full balcony, maybe 10 feet of headroom for the bar seating area and dining room behind front of house, and an overall tendency to devour low frequencies like the cute plant monster from Little Shop of Horrors, begging for more.

Sound check went well, with no significant lobes or nulls discovered anywhere as I wandered throughout the venue. The front row wasn’t painful, the last row wasn’t the echo chamber or resonating assault of LF doom that I honestly planned to criticize.

After sound check, we had the room to ourselves while demonstration videos and tracks showed off the detail of ShowMatch. The rig sounded clean and crisp, but these were tracks that I was completely unfamiliar with. (Sorry, no standing ovation from me for this part.)

Once the demonstration was complete, Bose engineering manager, Greg Zastoupil, asked for questions and concerns. Being the resourceful (or obnoxious, if you prefer) person that I am, a flash drive was already being loaded with my personal test tunes before the question was asked.

To clarify, this is old hat for me. Spending most of my career as a “hired gun” tech forced me to work with whatever system was provided. With few exceptions, I was basically running a different system in a different room almost every night. It doesn’t take long to develop prejudices with that routine.

I also understand that only an A/B comparison with a known cabinet was going to tell me what I really needed to know. That wasn’t an option, but downloading my preferred test tracks headed things in the right direction.

In fact, the Bose folks were very open to running my tracks and even asked for my call on tweaking the overall system EQ and processing. Naturally, I had them bypass the house EQ so I could just listen to the boxes.

Now, I might not have been overly impressed with the first… impression, but within five minutes things were very different. Christina Aguilera, Herbie Hancock, Janis Ian, Pink Floyd, Foo Fighters… Everything I had loaded on that drive was scanned through and used for reference.

The detail throughout the upper and midrange frequencies was closer to control room monitors than line arrays. The low frequencies maintained their definition at louder levels, even more than I felt was necessary. And after breaking out the spectrum analyzer, those results stood. This was really happening. Bose had impressed me with this new rig.

Again, the specs and hype never really impact me in a positive way (and most of the time it has the opposite influence), but the proof was definitely in this auditory pudding. These cabinets both live up to the hype and are light years away from my early impressions, formed years ago, of Bose loudspeakers in larger-scale applications.

To the point: Bose Professional has stepped up to the plate and driven home a winner with the new ShowMatch DeltaQ array system.

Erik worked in a wide range of roles in pro audio for more than 20 years in a dynamic career that encompasses system design and engineering in the live, install and recording markets. He also spent a number of years as a church production staff member and Media Director, and as an author for several leading industry publications before joining the PSW team. His latest project is the WYWU: Working Your Way Up podcast. Reach him directly through the contact form at WYWU.org.
All Posts
Top Stories
Explore All Reviews