Roger Daltrey, lead singer/front man for The Who and fantastically fit in voice and physique at the age of 67, recently found the energy, commitment, and personnel to perform Tommy in its entirety, offering a faithful reproduction of the original work, with support by a dedicated sound team and Eighth Day Sound.

The Who’s double-LP wowed musical audiences of the late 1960s with its storytelling, fresh and powerful chording, interwoven musical motifs, and epic musicianship.

So challenging a piece to play live, the band historically only performed popular selections from the work, and even their career-defining performance at Woodstock left some of the opera’s compositions off the set list.

Fortunately Roger Daltrey, lead singer/front man for The Who and fantastically fit in voice and physique at the age of 67, recently found the energy, commitment, and personnel to perform Tommy in its entirety, offering a faithful reproduction of the original work.

He is backed by a five-piece group of accomplished musicians – assembled by guitarist/musical director Frank Simes – that includes Pete Townsend’s younger brother Simon on guitars and vocals.

Traveling Europe and North America since February, the tour features an ample mixture of seasoned personnel and quality sound reinforcement gear, with Paul Ramsey, who’s been with The Who since early 2004, handling front of house mix duties.

Eighth Day Sound of Cleveland, which has been providing audio production to the band for several years, continues the relationship in supporting Daltrey’s solo efforts.

Tool For The Job
Partially due to the complexity of the production, Ramsey has chosen to go with a digital mix, effects, and signal distribution package. His 96-input DiGiCo SD7 console includes the recently released Waves SoundGrid plug-in package for some of the dynamics and portion of the effects. When I caught up with the show in Colorado in October, the only evident outboard device was a TC Electronic M6000 reverb patched via AES ports. 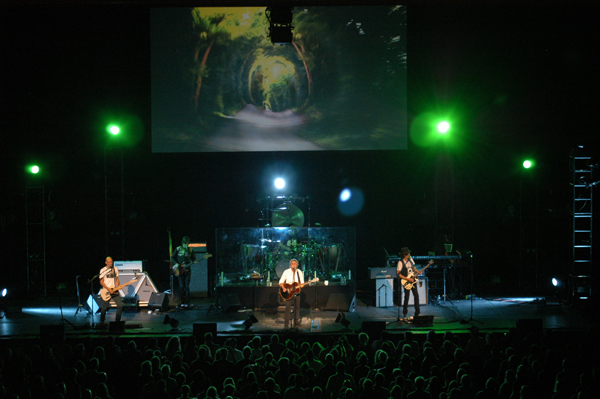 “I still have a big love of analog consoles, but sound-wise digital desks are getting there,” Ramsey related during our extensive conversation. “For me it’s about using the right tool for the right job. For channel count alone, digital makes more sense than carrying two analog consoles around. If I were mixing a straightforward band with 24 inputs, then I might say analog would be the way to go.”

On Tommy, Ramsey’s mix execution is simplified by snapshots that accommodate the many instrument and textural changes. “It’s a snapshot per song, with the exception of a timed vocal fade on one number. I don’t like to over-complicate snapshots, so they are limited to MIDI commands to any external effects, some slight dynamics changes, mute groups, faders, aux sends, and groups. No EQ or gain changes normally.”

He’s also breaking new ground by using the all-internal Waves plug-in package integrated in the SD7.” This is the first time I’ve gone entirely internal as I have the Waves package, and I think they sound really good. I normally use some Midas XL42 preamps that run analog to front of house, with outboard preamp and compression, and then into the desk.”

Ramsay is a busy man at the front desk, with responsibilities that also include archiving each show on a 72-channel Nuendo rig on a fully loaded Mac Pro, and producing a 24-bit/48-kHz stereo mix suitable for distribution through the band’s website. 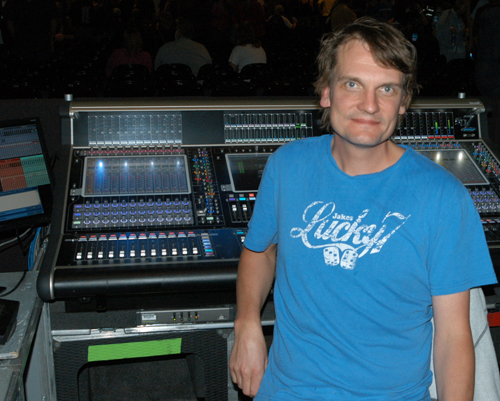 He relies on a Zoom H4n recorder which outputs to SD memory cards, and remarkably, the production manager usually has show recordings uploaded before the truck doors are closed.

“I’m always conscious that I’m mixing for the gig, not the recording,” Ramsay is quick to point out. “The recording is fed from post-fade stereo aux buses, which allows me to do some heavier panning than what I would typically do in a house mix. In the venue I have to be careful not to pan too dramatically, lest someone in the house miss a part. On the recording though, I can pan the backing vocals, guitars, and toms. and create a broader field.”