This is the fourth in a series detailing the latest technology in wireless microphone systems. Click to read the other installments: AKG DMS 700; MIPRO ACT Digital; and Lectrosonics D4.

Sennheiser has long been one of the top wireless system manufacturers, respected for solid technology, high audio quality and a wide range of products, all evidenced by a long and varied user list.

Earlier this year at the NAB (National Association of Broadcasters) show in Las Vegas, Sennheiser introduced the 2000 Series, its latest wireless system development.

Pricing of the new 2000 Series is in line with the Shure UHF-R Series, and it now represents the “middle” of the Sennheiser line, with the 5000 and 3000 Series at the top, followed by the 2000 Series, and then the evolution Series, and finally, the Freeport system that’s primarily marketed in MI stores.

Additionally, each generation of evolution wireless is compatible with the 2000 Series line, as are capsules and accessories.

Technology
The EM 2050, likely to be the standard receiver in the 2000 Series, provides up to 75 MHz switching bandwidth and 3,000 frequencies to choose from, with 25 kHz steps. This is compared to 36 MHz with 1,440 frequencies for the popular evolution G2 Series and 42 MHz with 1,680 frequencies in the newer G3 Series.

Therefore, the 2000 Series offers quite a wide tuning range and plenty of frequencies to choose from, which can be a real advantage in today’s challenging and changing RF environment.

All 2000 Series transmitters (U.S. models only) offer switchable RF output power levels at 10, 30, 50 and 100 mW, to better meet the needs of different applications.

This is a nice feature, and it’s beginning to become more common.

One of the main features in the 2000 Series is the Ethernet port and WSM software – both used for system management, monitoring and control.

They offer the user quick access to all system parameters and conditions, along with the ability to quickly implement an entire frequency plan.

Interestingly, even as we see more digital and “hybrid” wireless systems coming into the market, the 2000 Series utilizes Sennheiser’s HDX analog companding technology that was introduced about 10 years ago with the evolution G1 Series. Don’t get me wrong, though, because this is not a detriment.

The primary advantage of analog companding is that it avoids any latency – all digital or hybrid systems incur some signal delay, due mostly to the A/D conversion process.

A disadvantage is some signal degradation, particularly with certain types of source material – high-frequency transients are particularly challenging for companders.

Nevertheless, HDX technology has pleased many users and no doubt will continue to do so.

Features
Like many other comprehensive wireless microphone systems, the 2000 Series allows for synchronization of the transmitters via an IR port on the receivers.

This certainly speeds setup when compared to manually transferring frequencies.

The 2000 Series rack-mount receivers can also be daisy chained up to 16 channels without the need for external antenna distribution.

One additional nice feature on the EK 2000 portable receiver for video users is the addition of diversity (a change from the evolution G2 EK 100, 300 and 500). This should provide greater range and resistance to dropouts.

Also, the EK 2000 portable receiver offers synchronization of the transmitters via an IR port, a very convenient feature for on the go frequency coordination.

Thus, if you have lav mics already wired for these upper-tier transmitters, you can use them directly with the new 2000 Series bodypack.

A unique feature with the SK 2000 for guitarists is a built in guitar tuner and a virtual cable emulation that gives the user the opportunity to select a preferable impedance. 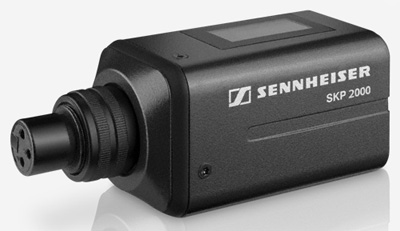 Pricing
As noted earlier, the 2000 Series is priced similarly to the Shure UHF-R Series – this probably isn’t an accident. The EM 2050 receiver can be found for a street price of $2,798, while the bodypack and handheld transmitters run at just under $800 each.

This equates to a per-channel price (if counted in multiples of two) of about $2,200.

Conclusions
While certainly not the most expensive system out there, the 2000 Series is a serious investment when compared to the evolution Series as well as models from Audio-Technica, Lectrosonics and the aforementioned Shure.

Yet the fact remains that the 2000 Series offers a number of very nice features – particularly the stuff that makes the user’s job of setup and monitoring easy and quick. Sennheiser retains its place among the leaders of wireless technology, and the 2000 Series should make a lot of pro users (with pro budgets) happy.

Find out more about the Sennheiser 2000 Series here.