How It’s Made: Inside FaitalPRO, Driving Loudspeaker Driver Development

Striving for the highest standards in development and manufacturing

“Thorough cleaning inside and out before applying dust caps is fundamental, as the air gap is where you have the least space and the most movement, so very little tolerance,” he adds.

Test stations verify aspects such as correct magnetization and component bonding, and although component positioning on the line is almost all auto mated, certain aspects, such as ensuring that for example one part mounted inside another is fully inserted, require an experienced human touch.

Cone application for example is carried out manually, as soft materials are unsuited to robotic handling.

Naggi stresses, “Some manufacturers also apply adhesive manually, but dosage is of fundamental importance, since – as well as looking messy – surplus adhesive adds weight and moving mass plays an important role in performance. Applicators are thus fully automatic, have preset programs for the various speaker models and can apply two (or more) adhesives simultaneously.”

Before packaging, finished products undergo thorough test procedures, starting with a visual inspection and including tests with signals to check physical integrity visually, then computerized tests for reproduction parameters.

An extensive testing process on products covers a wide range of factors such as climate issues, shock/vibration, and much more, to see how they’ll stand up in actual use.

Never believers in resting on their laurels, the FaitalPRO team has decided to launch an additional new range of products, based entirely on ferrite magnet technology, but before going into detail on the company’s incredible commitment to this ambitious project, Naggi expresses in no uncertain terms their ideas on neodymium.

“To cut a long story short, we don’t fully agree with the ongoing panic of some of our market’s players regarding neodymium, much of which is caused by incorrect information,” he says. “My opinion – also that of the rest of our top management and sourcing department – is that the situation will not remain stressful for a long period, as there is the opportunity for other countries and other companies to start extracting rare earth minerals from several other sources not currently being exploited, including a very serious project under way at the moment for extraction from the seabed.”

FaitalPRO has adopted a two-fold approach to the situation. One part is to mitigate whatever damage has come from the way the market is behaving, purchasing on average from 200 to 220 metric tons per year of neodymium magnets.

“In the market we’re one of the largest purchasers, which is appreciated by our suppliers,” Naggi explains. “Therefore, we have the capability of minimizing the effect of cost increases for neodymium on the final price of the speaker, thus transferring to our clients as little increase as possible.”

The other part of the approach is a much stronger statement – the creation of a big alternative to neodymium products, on which the entire catalog with the exception of a few small-format models has been based so far – with the launch of an eye-popping 31 new ferrite-based products. 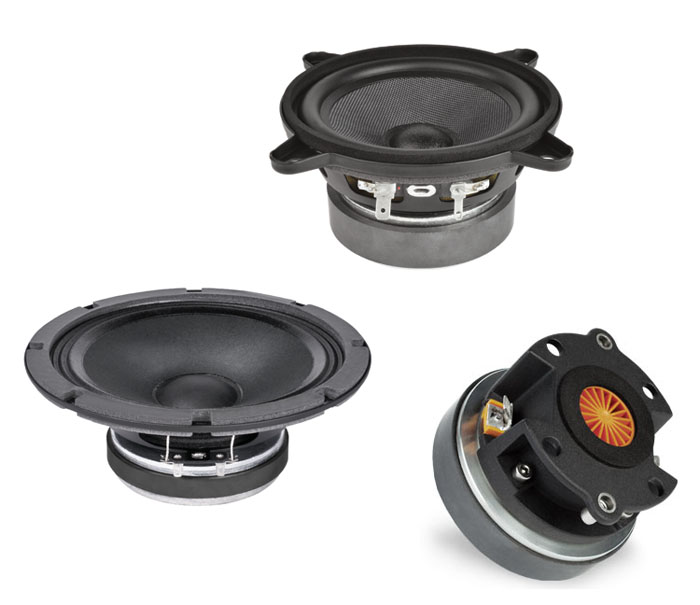 Just a few of the new ferrite driver models currently being rolled out by FaitalPRO. (click to enlarge)

“Although we made our neodymium products competitive with other manufacturers’ ferrite models, there was a slice of the market that wanted ferrite speakers no matter what, so before the end of the year we enter pre-series production on the new products, designed from scratch – new baskets, new magnet assemblies, new everything,” he states.

The entire development process began in March, and after just nine months of intensive work, a full product range is ready to go. Company officials stressed that FaitalPRO is not discontinuing neodymium, but rather offering an alternative – in fact, it will continue offering all current neodymium models and even add new models next year, alongside ferrite, thus creating a new flow of development, not a substitute.

Turra adds, “This project is not a trade-in at the cost of quality either. In fact, some speakers actually improve with ferrite, since the magnetic field works in a completely different way, favoring some of the features that are particularly appreciated in subwoofers.”

Concluding, Naggi notes, “After lengthy simulation work and a considerable amount of in-depth practical work in the field by our R&D team, we have also devised a very innovative method for cooling the ferrite magnets mounted, so this has been a huge undertaking, a very exciting time for us, and one of the biggest achievements since the inception of the company.”

Based in Italy, Mike Clark is a long-time writer on professional audio topics.

All Posts
PrevPreviousIn The Studio: Three EQ “Fake-Outs”
NextIn The Studio: What Engineers Should Know About MetersNext
Top Stories
Explore All Study Hall