Joe Jackson is best known to many for a string of breakthrough pop-rock/New Wave hits that began with 1979’s “Is She Really Going Out With Him?” but the British singer, songwriter, and composer (and five-time Grammy Award nominee) has explored a variety of musical styles over his stellar career.

His latest tour is no exception; a series of live shows in the U.S. and Europe in late 2012 featured both reinterpretations of his own material and selections from his latest record, a tribute to jazz great Duke Ellington that’s aptly titled “The Duke.” Jackson performed with his largest band to date, a seven-piece ensemble appropriately named The Bigger Band, featuring jazz violinist Regina Carter.

Ellington’s own (sometimes radical) reinterpretations of his own music heavily informed Jackson’s unconventional treatment of the material on record and on stage, using instruments including banjo, tuba, synthesizers and accordion rather than more traditional big band instrumentation. Doing so was a challenge, which Jackson notes in a recent bio: “When I started this, it felt daunting – like, how am I gonna pull this off?”

When monitor engineer Paul Froula first heard the recording, he echoed that sentiment. “Before pre-production I was thinking, ‘How much of this are we wanting to reproduce live?’ But it was a nice challenge.”

The three-week rehearsal process provided the opportunity to pull things together and work out the kinks. One highlight, Froula notes, was working with a mixture of musicians who were comfortable with in-ear monitors and others who were using them for the first time. “It was a nice change, as opposed to a band that’s completely accustomed to in-ears.”

Joe Jackson and The Bigger Band performing on the recent tour. All performers on IEM made for clean stage. (click to enlarge)

Simple Integration
One of the primary factors driving the design of both monitor and house systems was size and scalability, with the tour stops at venues ranging from large theatres to smaller clubs. “Essentially we had to fit everything we carried into a trailer behind a bus,” notes house mix engineer George Cowan.

Froula based his monitor system approach on a Roland V-Mixer M-480 console. While a variety of smaller format digital consoles have hit the market of late, he’s most familiar with the M-480, having used it recently with Todd Rundgren and others.

“We carried backline, band gear and our own FOH/monitor consoles on this tour,” he notes. “I’ll use this desk where space is at a premium and performance can’t be compromised. I’m comfortable with the workflow, and, considering the number of players and mixes I had to manage, things needed to be where I wanted them on the control surface. 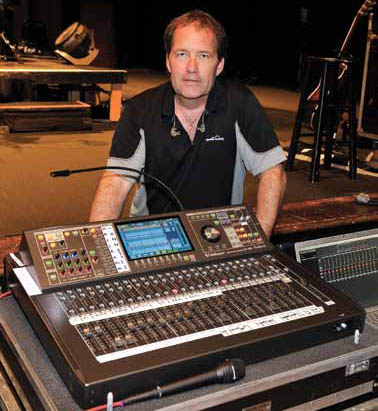 Paul Froula with the Roland M-480 console that proved a great fit for his work on monitors. (click to enlarge)

“Items like pulling up EQs, effects and my defined presets demanded a well-designed layout,” Froula continues. “The desk has an onboard RTA so I could isolate a few things visually – particularly Joe’s vocals. He has a fantastic ear, and it really helped to be able to work with George out front and his (Rational Acoustics) Smaart rig to get the sound he wanted in his ears.”

The ability to control the M-480 remotely with an iPad also came in handy, particularly for optimizing microphone positions and gain settings on band members Sue Hadjopoulos’ percussion and Nate Smith’s drum rigs.

“They’re next to each other on the same riser, separated by a Clearsonics drum shield, and between them there are 17 open microphones, so there was a lot of bleed potential. Not everyone has the iPad control app down, but the Roland app has almost every feature I needed, so it allowed me to be in two places at once.

“Standing at the congas monitoring a mix in the IEMs while simultaneously making console adjustments was a real time saver. Plus, I can tweak mixes while beside band members for those who like to be involved in that way.”