Kravitz is touring with a seven-piece band and has a large monitor rig, so the SD7's high channel count on both inputs and outputs has proved very important

Leading touring company Sound Image recently invested in a pair of DiGiCo SD7 digital consoles and is supplying them for both house and monitor system duties on the current European concert tour by Lenny Kravitz.

Kravitz is touring in support of the 20th anniversary deluxe reissue of his debut album Let Love Rule, and he has performed with DiGiCo consoles for several years. Monitor Engineer Kevin Glendinning has worked with Kravitz since the beginning of 2008, inheriting the job from previous incumbent Brian Henry.

“Brian was nice enough to loan me his DiGiCo D5,” explains Glendinning. “It was my first time on the desk, I adapted to it very well and I enjoyed it. The feel of it is analog and you can drive the console without really worrying about any limitations of digital audio.

“We did an entire year on the D5 and, while Lenny was off the road, Front Of House Engineer Laurie Quigley and I discussed going with the SD7,” he continues. “We’d both heard great things about it, and I was completely sold on the DiGiCo sound. Once I saw the SD7 I thought they had really nailed it and made a board – an entire system actually – that was a lot more conducive to monitor mixing.”

Kravitz is touring with a seven-piece band and has a large monitor rig, so the SD7’s high channel count on both in and outputs has proved very important.

“We have pretty much everything – lots of side fills, lots of wedges, lots of in-ears – so it’s nice to have a large amount of inputs and outputs. I’m constantly making up new channels that are pertinent to just ears, just side fills or just wedges,” says Glendinning, who is also making use of the SD7’s Alt Input, a function common on broadcast consoles that’s not often seen in the live market.

“I have four channels set aside just for Lenny’s vocal: one has extreme compression measures that he insists on hearing in his ears; another very flat and unaltered that feeds effects; one that is sent to band’s and tech’s ears; and another for all wedges and fills,” he states.

“Instead of making eight out of that, I use the Alt Input function so I can keep his effects and vocal channels within one bank. If we need to go to a spare microphone, or we lose a line, instead of burning out more channels, we use Alt Input and the spare channel will instantly do everything that original channel was doing before I lost it – all the EQ and the compression that’s sent to everyone’s ears, wedges and sidefills is the same. I’m just effectively picking a new line. That’s been a tremendous benefit.”

The way the output equalization is formatted allows Glendinning to spend as much time watching the artist as possible without having to be looking at the control surface. 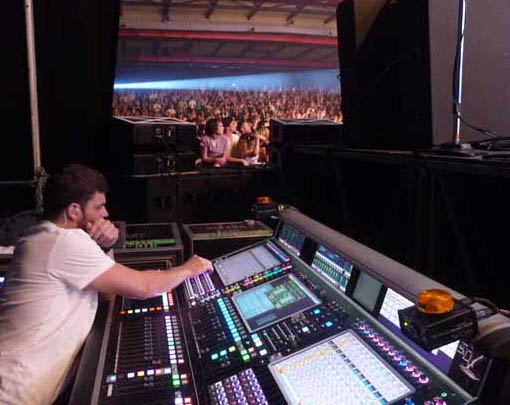 “They’ve even put the ability to ‘feel’ where zero is without looking in the graphic EQs,” he says. “It’s really nice because I can keep my eyes on Lenny but still have my hands at the desk and know exactly what I’m moving. That is a huge benefit. The dynamic EQs are also really happening. If I ever go back to analog I’m going to have a lot more racks, now that I know how great the DiGiCo dynamic EQs sound on pretty much everything.”

FOH Engineer Laurie Quigley has worked with Kravitz for around six years. “We started using D5s on the 2005 tour,” he says. “I’d used them for years with Aerosmith, Kiss and other bands I’d worked for. I brought them over to Lenny Kravitz because of the simplicity, the sound of the board and the amount of channels we use. We’re running up to 112 channels now.”

“I see the SD7 as basically an upgrade of the D5, which was an incredible sounding board with a good stable format,” he adds. “But for me, the SD7’s banks of 12 are better, the screens are obviously bigger and better, the speed of the board is better, the dynamic EQ is really good. I find the frequency dependent limiters are incredibly useful for certain things like vocals and acoustic guitars for getting rid of stuff you really don’t want.

“On top of everything else, I’m very impressed with the audio quality of the SD7. I’ve tried all the other digital boards on the market and, as far as I’m concerned this one is leaps and bounds ahead.  If it doesn’t sound good then Lenny wouldn’t have it on his tour, and I wouldn’t have it out here either.”

Glendinning concludes, “I get pretty upset that sometimes monitors is regarded as an afterthought, but DiGiCo has really thought about the monitor engineer with the SD7, and I think that’s been long overdue. I can’t say enough great things about both the board and the support we get from the guys at DiGiCo. Webby (David Webster, Marketing Director), Taidus (Vallandi from DiGiCo’s U.S. distributor, Group One), Tony (Crockett, Technical Support Manager) and Pete (Johnston, Technical Support) have been great; it’s a real any time, anywhere sort of outfit.”