Case Study: Variables Within The Routine Of Commissioning A System

Go into each calibration prepared, then be ready for the unexpected...

I recently traveled to Magnolia Church in Riverside, CA to commission a new house sound reinforcement system designed to support contemporary worship services, and as often happens, it proved an instructive process.

The system, installed by CCI Solutions, includes main arrays of L-Acoustics ARCS WiFo (Wide/Focus) loudspeakers flown left, center, and right to provide primary coverage in what is a very wide room. The arrays are supported by a flown ring of delay loudspeakers about three-quarters out in the house.

One of the first things I noticed when walking into the room was how good the room “felt” from both acoustic and aesthetic standpoints. And it sounds great—it didn’t seem like you’d just walked into a vacuum, and the reflections that were present were both natural and pleasing.

Another thing I appreciated (even though it wasn’t the reason for me being there) were the Absen 6 mm LED screens. You can barely see them hanging on stage; in fact, without work lights they’re almost undetectable when turned off. Overall the installation of everything in the sanctuary is top-notch, so my compliments to CCI Solutions. 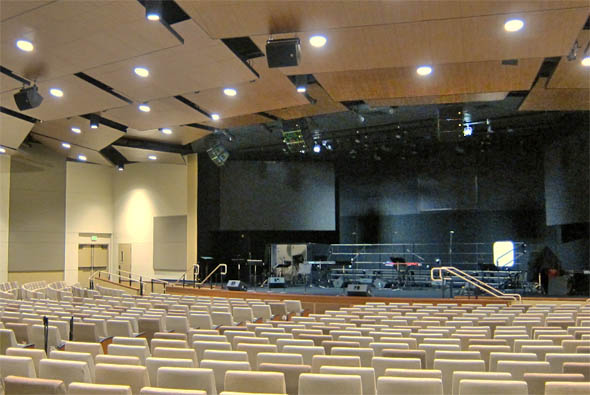 Overall most of the system tuning went as planned. I’ve found over the years that the key to providing a consistent product to my customers is to have a routine. I’m pretty dedicated to this routine, which is almost always a good (but once in a while not so good) thing. When all is working as it should, it’s great, but when there are unforeseen difficulties, I get a bit out of sorts and need to step back, take a breath, and sometimes take a break.

But that’s kind of the whole point of a routine—to manage chaos—so if you don’t factor for chaos into the routine, then you’re setting yourself up for frustration, and that can impact the end result.

1) Walk around, get a feel for the room.

2) Do the obligatory introductions and so on.

3) Take photos and mental notes of anything pertinent while walking around.

4) Get a solid handle on signal path—find out anything and everything that may be in line, why it’s there, and what it’s doing.

6) Take a few minutes to verify everything I’ve been told by anyone involved in the system design and implementation. This can involve verifying with EASE or whatever modeling program used, as well as gaining access to all peripherals in the signal path and verifying they’re all doing what’s expected.

7) Also verify correct functionality of all components in the system, one at a time.

8) Take a break, and think about/plan the specific calibration process.

9) Place microphones for first measurements, making notes on all microphone placement for later use.

11) Continue this process through all aspects of the system, including time alignment of all components.

12) Set up for listening test.

13) Listen to a high-quality track, isolating parts of the system and then eventually adding in all components.

14) Make small changes and level attenuations to taste and style.

Read More
Up For Any Variables: Sound For the Latest Rob Thomas Tour

17) Save all files one final time and distribute files accordingly.

This process, repeated hundreds of times, has helped me provide a consistent product time and again.

But at Magnolia Church I ran into something that caught me off guard. I had to take a step back and ultimately ended up consulting with a peer to help me work through what was going on.

It was really something I should have figured out immediately but as stated above, the room sounded so good that I didn’t expect to run across anything unusual. Plus, having calibrated well more than 40 systems with ARCS WiFo arrays, I pretty much know exactly what I’m going to see and hear.

Looking at my four measurement mics placed evenly over the plane of the vertical coverage of the house left cluster, on axis, here’s what I expect:

That’s from the second mic in the set of four. However, the surprise came in these readings from microphones one and three: 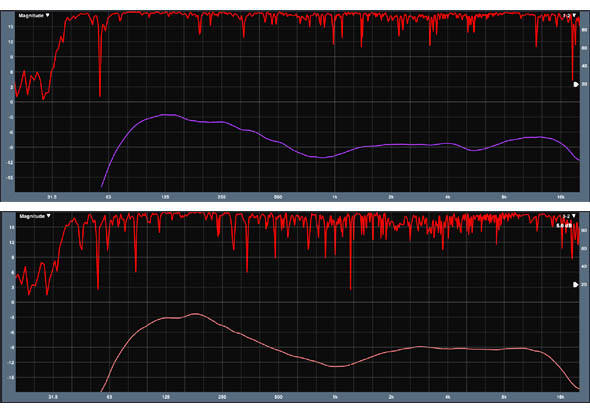 In a room with fixed seating, carpeted floor, flown acoustical clouds, acoustic treatment on both the side and back walls, etc., you just don’t expect this kind of notch in the frequency response. A common approach to this type of response curve would be to apply EQ to compensate since it shows up in three of the four microphones along the plane of the array.

Initially I noticed some low-frequency loading as well, and ended up attenuating about 3 dB from 180 kHz down. It should have been my first clue as to what was causing the notch, but I decided to forgo any action on it for the time being, and moved on to the center array. Here I noticed slightly less LF loading, and the notch wasn’t visible:

I then moved on to the house right array, and because the room is symmetrical, I expected a similar response to the house left array:

Sure enough there was the notch again. What was causing it? Talking it over with a colleague, he pointed out the proximity of the left and right arrays to the acoustical clouds. Sure enough, that explained it.

With the center array, the problem wasn’t occurring due to the clouds being split directly where the array was hung. During the rest of the calibration I noticed a similar behavior from the delay loudspeakers that coincided with each array. 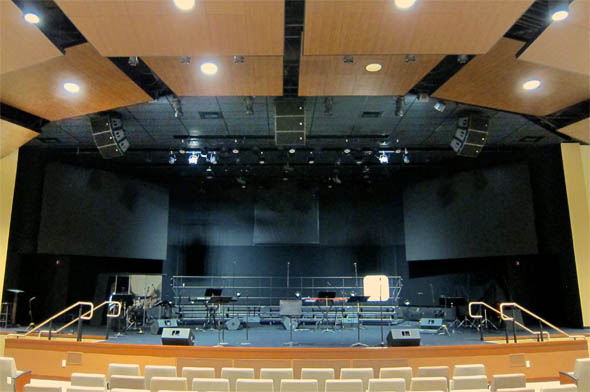 My mistake came in not initially noticing the proximity of the arrays to the clouds, and that this could potentially be problematic. (The previous 10-plus systems I’ve calibrated had the arrays hanging in free space.) So, as noted earlier, it’s is important to have a calibration routine in place, but it’s even more important to not allow that routine to trump good practice.

I could have applied EQ to compensate for something I didn’t expect, but instead broke out of the routine to consult with a peer. (Getting input from colleagues is almost always helpful.) And while my routine doesn’t have a step calling for input from others, the routine did tell me that the phase lined up for all measurement locations, so I knew I had to be missing something.

Read More
Full-Metal Prep: The Value Of A Well-Appointed Workbox At Every Gig

The moral of the story is to follow the processes you have set up for yourself. Go into each calibration prepared and informed, know how the loudspeakers should perform, and know what you should see and hear. Then be ready for the unexpected, and don’t overreact if something’s amiss. And by all means, don’t be afraid to someone else’s take on the situation.

Josh Maichele has been mixing sound and designing sound systems for more than 20 years. He’s also served as front of house and monitor engineer, lighting designer, production manager, video director and tour manager for a range of clients, including some of the nation’s largest church organizations and top entertainment venues. Find out more at joshmaichele.com.