Best Threads: What Happened At Coachella?

A discussion about the system failure during the Radiohead performance at the 2017 festival.

Apparently, there was failure of FOH at the Radiohead show at Coachella on Friday (April 14th). Anybody know what happened?

I’m always interested in “lessons learned” after such things, because they are everyone’s nightmare.

What I read (no idea if it is true or not) was that the console went down.

In the videos of the event you can hear what has been described elsewhere as the “bloop!” of the band’s Avid S6L having a DSP error and shutting down. 26 seconds later audio is restored. I don’t know enough about the S6L to know if this is a valid possibility.

If the S6L is anything like the previous consoles there will likely be no audio dropped if there was an error.

Have had many errors on avid desks including a DSP card freaking out and the entire desk becoming unresponsive but audio still passed. 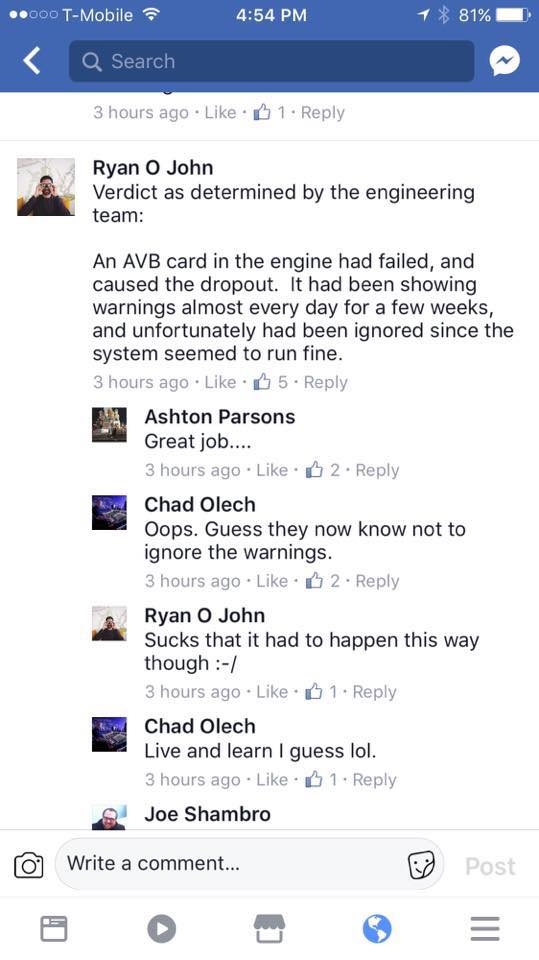 As seen on Facebook.  Apparently the lesson is to pay attention to the warnings from your console.

Just curious, what would be the nature of the warnings?
Error messages perhaps?

Like any computer the desk has error log output. The AVB card connects digital signals to the console. The errors could have been framing or bit errors on the link or other hardware related things like bus or memory issues.

I would HOPE it’s in the form of error messages. “Caution, something’s whack with AVB Card #Whatever; you should fix it, RTFN.”

I read somewhere else that it was due to generator problems because they were supplied three smaller generators instead of two beefier ones, even though the total supply was to be the same, and barfed when the electronics needed more peak power?

Sensitive things (like consoles) should be on a UPS.

I think the UPS thing is over valued… Unless you have a very high quality UPS, you’re probably just adding another failure point. If you have a cheap UPS and it switches to battery power, are you going to make it through your gig? Most modern equipment with well designed PSUs should be able to handle most situations that you’ll run into.

Also where is the line drawn? What about amps that have DSP built into them–we’d probably not put them on a UPS. Intelligent lighting? I’d rather recommend that people meter/monitor their power, make sure you use good generators, and invest in quality AC distribution.

Not trying to pick on Ivan.

It’s not about making it through the gig on battery power, it’s about getting through brief interruptions without going down for several minutes while everything reboots.

Amps and DSP usually boot pretty quickly. Most consoles and computers don’t. You can’t (and shouldn’t) put a UPS on everything, but having them on the sensitive components that take a while to boot makes sense to me. If you don’t want to run UPS’s on your equipment, that’s your decision, but you’re not going to talk me out of running mine.

Agreed. I put a UPS on anything that a power hiccup is going to force a reboot on. Digital audio consoles, DSP units, video switches, video routers, etc.

With DSP in amps that blurs the lines. Ideally you’d be able to mute the amps (and cut the high current draw as a result) whenever a UPS kicked in. With the right setup you could accomplish this and for an install it might be useful. However, as someone else said up thread having good power is a better option. That said, I’ve experienced unexplained power blips in buildings that should have been golden. Didn’t have UPS in the racks then and it caused a little scrambling. We’ve fixed that now.

First, I take the blame for the Radiohead console failure. I wasn’t there and have nothing to do with the band but I was told today is my turn to be Designated Scapegoat, so there you have it. /sarc

Humor aside, I’m a big believer in UPS back up for *everything* that has a boot time of more than a few seconds.  Consoles, system DSP, lighting consoles, etc.

WWE has the biggest UPS I’ve ever seen in portable use (and they have generators and land line power with auto switching). The UPS powers the primary production truck and the uplink truck for the 10 seconds it takes to accomplish the switch over.  The battery bank and inverter are both about the size of a large commercial refrigerator (and weigh considerably more).

If Vince McMahon can have a UPS, so can I!!

That’s because the penalty for allowing that system to go down is being thrown in the ring.

Do you have any suggestions or ideas about this one? Click here to go straight to this forum thread to ask questions or add comments. Click here to access any of the forum categories.