American Utopia: Behind The Scenes On A Technologically Challenging Tour

Backstage with John Chadwick and Pete Keppler as they wrangle an almost entirely wireless concert tour for David Byrne.

Wrangling RF channels is always a challenge and every tech’s “pal,” Mr. Murphy, is always standing by to lend a hand. With spectrum shrinking and demand increasing, challenges abound. Add touring to the mix and it becomes a challenge not for the faint of heart.

Imagine having to wrangle 20 channels in a new town and venue every night on a tour. It hardly seems like a utopia, right?

Then consider this: the David Byrne American Utopia tour, which just wrapped in late November, carried 66 channels of wireless, using 53 of them a night. The band played pretty much the same set every night – a mix of current material, Byrne’s solo work and collaborations, and some Talking Heads classics.

At a stop in Portland, OR, I visited the engineers and investigated what makes this tour tick. Stage duties were handled by John Chadwick while Pete Keppler mixed front of house.

Between the two of them, they have decades of road experience, Chadwick with Luis Miguel, Steven Tyler and Aerosmith, Judas Priest, and most recently with The Anderson, Rabin, and the Wakeman version of Yes. Keppler has been at FOH for many notable acts as well, including Katy Perry, Bonnie Raitt, Patti Smith, Nine Inch Nails and the late, legendary David Bowie.

The stage set was quite striking, with 119 by 27 feet of aluminum hook and loop chain hung around three sides of the stage. Chadwick says, “The stage itself is totally free from cables, speakers, stands, risers or lights. The stage floor gets covered in a soft, light gray Marley and it’s remarkable how large a 55-by 32-foot stage looks and feels without any traditional backline on it. We don’t use any guitar, bass or keyboard speakers anywhere, even offstage.”

Chadwick responds, “If you look really hard you’ll spot a pair of audience mics offstage on either side. These use good old XLR cables that are routed offstage. We have two 14-way multipair cables going to two racks all of six feet from monitor world. One goes to the Kemper rack for guitars and bass. The other cable goes to the keyboard rack located right next to the Kemper rack to give us eight keyboard inputs. There’s also one AC backline power drop to supply the two racks.”

It’s an obvious assumption that so much metal hanging around the stage would have some negative effects on the many wireless channels in use. It took a lot of testing and brainpower to get it right. Chadwick explains, “We spent a few days in August of 2017 with the chain hung ‘in situ’ and the RF gear we were planning on using. After some high-level methodical myth-busting we determined that the chain does attenuate the RF signal significantly.

“Our experiments proved that putting the antennas above the stage and inside the chain gave us better results onstage but was slightly detrimental to the signal offstage left. For an indoor venue this isn’t so much of an issue as there are helpful reflections to fill in the gaps. Outdoors, the band are all aware that there is the slightest chance that there may be the occasional drop while they are offstage left before the show starts but the onstage will be rock solid. I should add that this only seems to apply to the in-ear systems. The (Shure)Axient D (digital) is just ridiculous. We have line checked with all the drum gear set up in the back of the truck at a couple of festivals.” 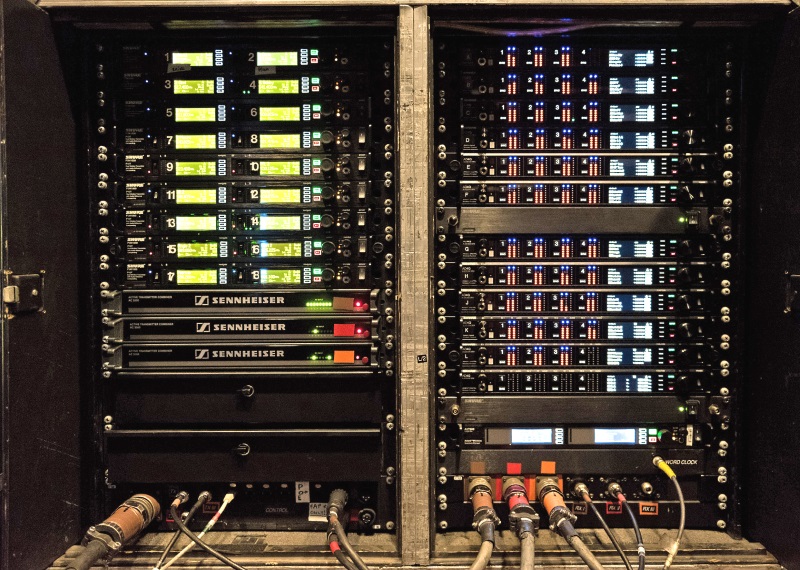 They carried 48 channels of Shure Axient D wireless, deploying 42 of those channels on a daily basis, with all but four running in high-density (HD) mode. There were two transmitters for bass guitar, five for guitars and five more for vocals, 30 for drum/percussion microphones, and four served various talkback needs or are supplied to the opening act.