Allen & Heath dLive & SQ Deployed For We Out Here Festival

Allen & Heath mixers tackled front of house and monitor duties for We Out Here Festival, held for the first time this August and curated by BBC Radio 6 DJ, Gilles Peterson, his Bronswood Recordings label and Worldwide FM. Taking place across four-days in rural Cambridgeshire, UK, the family-friendly festival showcased an eclectic line-up of underground artists and DJs.

Supplied by AV production company A-Live Sound, based in Glasgow, Scotland, five dLive and four SQ systems were chosen to run front of house and monitors across seven stages.

Iain Mackie (director at A-Live Sound) comments, “I chose to invest in dLive and SQ as they’re the best sounding consoles on the market right now. With dLive specifically, unlike some other manufacturers, it has endless high-quality plug-ins – especially the Hypabass FX and Dyn8. It’s also incredibly easy for visiting engineers to just rock up and mix the band as the whole system and interface is very intuitive and well laid out.”

The main stage featured two dLive S7000s and two DM64 MixRacks paired with three Dante cards for virtual soundchecks, multi-track recording and channel splits between consoles. “This was my first real gig on the S7000 and while I’m used to running festivals on competitor consoles, this event will be a particular favorite for a long time. dLive is so easy to use, self-explanatory and it sounds really great,” comments Martijn Van Renterghem, chief system designer at A-Live Sound. 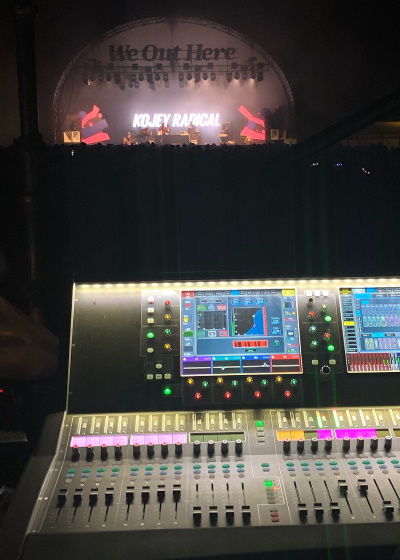 Also making full use of dLive’s onboard plugins, Van Renterghem adds, “The plugins are so good that I don’t think I’ll ever bother plugging in my Waves system again! Being able to add the Dyn8 onto any channel is such a great tool.”

Darren Hutton, sound engineer at A-Live Sound, adds “dLive’s interface and workflow is really easy to use, intuitive and sounds fantastic! I was really impressed with the reverbs which sounded very natural and authentic, especially when mixing on in-ears. The dLive Director software and additional features such as importing scenes, being able to reset aux mixes and pre-patching show files for visiting engineers were particularly nice to have, as it meant I was spending less time on the desk and scene management and more time focused on dealing with the artists’ needs.”

Hutton continues, “The S7000 is definitely my favorite desk at the moment and I look forward to using it more in the future. Whenever I’ve talked about dLive with other engineers, I’ve only heard positive comments.”

With its compact footprint and rising popularity as the walk-up-and-mix console of choice, Allen & Heath’s SQ series led the charge on front of house and monitors over on the Big Top, Woodland, Forest and Love Dancing stages – the go-to areas for fans of house, electronic, funk and soul. Additionally, four DX168 expanders were split across the stages, providing further remote I/O for the artists, as well as DJ set-ups, changeovers and festival announcements.

With A-Live Sound having made a significant investment in dLive and SQ, both Allen & Heath and its UK distributor, Audio-Technica, attended the event, offering support to the house techs and visiting engineers.

Léon Phillips (technical marketing manager, Allen & Heath) adds, “It’s great to see more Allen & Heath consoles appearing on festival riders each year and to see so many visiting engineers taking to dLive and SQ with total ease. They simply rocked up with their show files and despite never having used these consoles before, they were comfortably set-up and running in a matter of minutes. The feedback from the house engineers was also incredibly positive, with the consoles’ ability to drag and drop layouts on the fly being highly praised.”