A Conversation With Product & Technology Wizard Gerald Stanley Of Crown

A conversation with Gerald Stanley, who in his 45 years at Crown has had significant impact on the company's many contributions to the pro audio industry

Editor’s Note: This interview with Mr. Stanley was conducted in 2002. Also, you can learn more Crown history here.

As Crown marks its 55th anniversary – celebrating a unique history marked by many notable contributions to the pro audio industry – I spoke with Gerald Stanley, who, with his expert product design and engineering work, has had significant impact in helping bring those contributions to life over the course of almost 40 years with the company.

He continues to thrive in his role to this day and was gracious in submitting to an interview regarding Crown past, present and future.

Keith Clark: How did you get started in this business?

Gerald Stanley: I started as a kid (11 or 12) by SWLing (short wave listening) using old radios that were being discarded around the neighborhood. The best units were taken and souped-up using the spare parts of the less worthy units. It was great fun trying to determine why the radio’s designer had done this or that.

It became clear that engineering products could be fun. Every radio had an audio power amp and speaker portion as well as the RF portions. I modified them all. By high school, high-feedback tube power amps were being designed and built for family and friends.

The lesson is if a kid comes to your doorstep and asks for your old PC, give it to them. Who knows what they may make of it all? Your old PC may transform the world in due time.

KC: Have you always had an interest in audio and electronics?

GS: Before electronics there was the classic electric train set.

KC: What year did you join Crown, and what position did you initially fill? What were you primarily working on?

GS: My first year at Crown was 1964 when I was still an undergraduate at Michigan State University. I worked summer and breaks as a technician in the tape recorder setup area, as a draftsman and as a solid-state power amplifier designer working on the first Crown transistorized designs.

All engineers worked first on the line to learn the products in those days. The products were tape recorders and amplifiers were accessories. In 1966, I returned with a graduate degree from the University of Michigan and went to work full time on designing tape recorder electronics and power amplifiers. 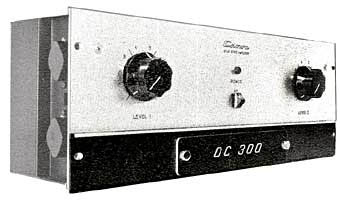 The Crown DC 300, which ushered in the age of modern power amplifiers in the late 1960s, designed by Gerald Stanley (click to enlarge)

KC: What do you like most about working at Crown?

GS: Working at Crown over all these years has been like having multiple careers without ever moving. The company has grown and changed much. It has been a multitude of companies all at one address.

One of the more unusual was the design of a speech rate translator that was ultimately used by a judge to play back the Nixon tapes at higher than normal speeds.

Keith has covered professional audio and systems contracting for more than 25 years, authoring hundreds of articles in addition to hands-on work in every facet of publishing. He fostered the content of ProSoundWeb (PSW) from its inception, helping build pro audio’s largest portal website, and has also served for several years as editor in chief of Live Sound International (LSI).
All Posts
Top Stories
Explore All Study Hall