Launched in 2011, Forbes Magazine’s 30 Under 30 list celebrates creative disruption by spotlighting 600 young stars across 20 different industries. The yearly encyclopedia has also spawned the Under 30 Summit, which brings together more than 7,000 entrepreneurs and speakers representing a broad mix of talents, including investors, celebrities, musicians, sports stars, cultural icons, chefs, and political and business leaders.

With six themed stages spread across Boston’s City Plaza, plus three more at nearby venues, the Under 30 Summit features TED-style presentations, keynotes, and live musical performances. For the second year in a row, Boston-based High Output was the designated audio-visual production company with loudspeaker systems from VUE Audiotechnik. 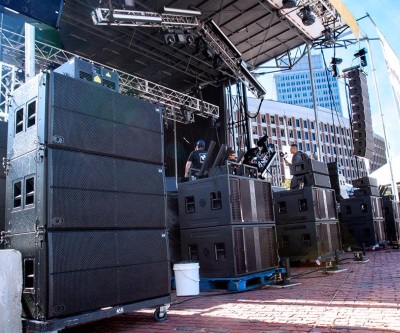 “I’ve been working with VUE almost since their beginning. They’re our primary speaker vendor,” comments Jim Hirsch, owner of High Output. “The VUE speakers simply sound fantastic, and the build quality is exceptional. Most importantly, VUE’s support is the best in the industry. From the team at the main offices in California to the local rep, I just don’t see their level of service from any other brand.”

“This plaza has a 26-foot glass wall about 500 feet from the PA that has a tendency to produce a lot of slap back at higher volumes,” explains Hirsch. “We’ve tried many different PAs out there over the years with varying results, but the VUE system handled it easily. With minimal effort, we had it perfectly dialed. Even with headliners Butterscotch, Marshmello, and Russ—all pushing concert level SP—the al-12 never faltered, and coverage was exactly where it was supposed to be.”

“The VUE systems balance sound quality and output better than anything else out there,” says Hirsch. “That was particularly apparent when Jeff Flake appeared on day three—just a few days after his infamous elevator encounter. The national media coverage resulted in a much larger crowd than we originally expected. With the al-12s we had all the extra SPL we needed with perfect intelligibility to boot. Think about that—Marshmello and Flake on the same system with virtually no tweaking. I swear, the more you push a VUE rig the better it sounds.”

With the Forbes event successfully behind them, the High Output crew is looking forward to a packed fall with their favorite VUE solutions slated for an array of events from small to large. Beginning with HubWeek 2018 in early October, their calendar also includes events for Rosie’s Place Sanctuary for homeless women, WaterFire Providence, and Immunogen Pharmaceuticals, to name just a few.

“The versatility of the VUE systems, along with the exceptional support of their team has allowed us to expand our business and take on all kinds of events,” concludes Hirsch. “I’m very pleased to work with a company so committed to building mutually beneficial business relationships.”