“We’ve been the exclusive audio supplier to the festival for over 30 years,” notes Aerial’s Dave Bartlebaugh, who also serves as production manager for the festival. “We’d been hearing a lot of positive things about VUE, and were very curious to hear their systems in action. We’ve known Jeff Taylor for many years, so when I found out he’d joined the company, I immediately contacted him about trying a couple line arrays at the festival.”

Midas PRO series consoles were deployed for mixing at both stages, with a PRO2 at the Mack Avenue Records stage and a PRO6 at the Carhartt Amphitheater.

“The VUE systems sound really good,” remarks Lillie. “The low frequency SPL from the al-4 is impressive and both systems seem extremely accurate. They both sounded good out of the box and needed little very little EQ. We’re impressed.”

While testing new gear is certainly fun for audio enthusiasts like Bartlebaugh and Lillie, both understand that real success comes in the form of happy customers, and with so many visiting engineers, there is little room for mistakes. Fortunately the VUE line arrays made a positive impression across the board.

“From the moment I walked up to the console and pushed the faders up I felt instantly comfortable with the VUE system,” remarks Claudia Engelhart, who mixed guitarist Bill Frisell’s performance in the Carhartt Amphitheater on the al-8 system. “It was beautiful, really smooth and totally responsive. I could literally feel it in my body it was so clear. I loved it.”

The smaller VUE line array also earned its share of accolades, with transparency and sheer output most often cited among its most impressive qualities.

“I think the al-4 kicks major butt,” says engineer Dan Hubbell, FOH engineer at the Mack Avenue stage. “Right out of the box it is the best sounding line array for vocals that I have ever heard. It’s ridiculous, just flippin’ ridiculous.” 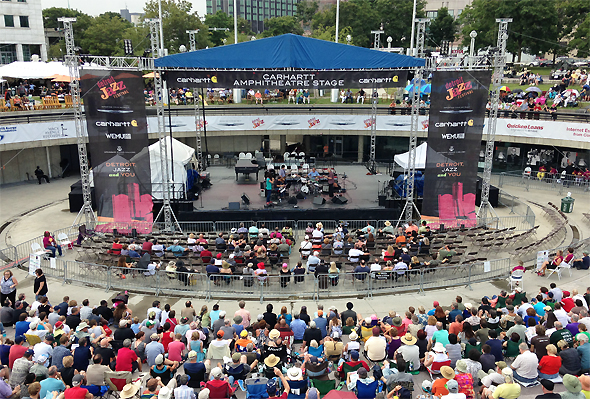