Multiple D5's ensured that vocals were crystal clear during the Ryder Cup VIP concert and dinner.

Golf’s prestigious Ryder Cup paid its first visit to Wales this year, the tournament taking place in early October at the Celtic Manor Resort, near Newport.

The sound reinforcement demands of the event were complex with the Millennium Stadium being divided into two for the dinner and concert elements.

Audio company Capital Sound was required to treat both the dinner and concert as separate entities which were effectively competing against one another.

Walk-in music was provided to mask the sounds of the dinner from the public filing into the concert seats but, at the same time, a performance by male choir Only Men Aloud in the dining area was masking the sounds of the public from the VIP diners, as the concert was supposed to be a surprise to them. Announcements were also discrete to both areas.

At the same time, however, certain elements needed to be audible to both sides, such as the audio for VT feeds by Ryder Cup sponsors.

Capital Sound’s solution was to deploy three DiGiCo D5s, one feeding a distributed audio system in the dining area, with two at the traditional FoH and monitor positions in the concert area.

The feed for all playback elements, voiceovers, VT sound and stings came via fibre optic link from a television OB truck – parked at the nearby Cardiff Arms Park – to the D5 in the dining area. This was then matrixed to the two consoles on the show side. That way, audio could be routed to any required console, while each could also mix the elements for their ‘own’ areas independently.

“We used the D5s because we wanted to keep the quality of the signal chain excellent all the way through, plus the guys working the event were familiar with them. So, for me, the D5 was first choice,” said Capital Sound general manager Paul Timmins.

“The system design for the concert was put together before we knew which artists would be performing, so we dealt with it like a festival rig, knowing that various different styles of music would have to be accommodated.”

“The D5s were ideal for that and, with the longest permitted changeover between acts being only 110 seconds, they were patched to their 96 channel maximum with everything saved as snapshots.”

“A few days before, I got a call from Charlie asking if I’d like to do Dame Shirley at the Millennium Stadium. I said ‘Why not? Absolutely, great stuff!’” says Dave.

“It was fine, you’ve simply got to take care of the levels and put Shirley on top and that’s it,” he said. “With an orchestra I find less is more.”

“You can’t do too much with them – you’ve just got to set the gain, get a balance on the strings as a section, horns as a section and so on. Little bits of EQ where it counts and then just sit the vocal on top.

“It can’t be too loud but, at the same time, it can’t be too quiet either because nobody likes it if they can’t hear everything. For me the only difficult part was getting the overall level right and you can’t do that until you judge the audience.”

“With Dame Shirley involved, who knows what the reaction is going to be? They could be jumping on their seats, cheering or they could sit there completely wrapped up in her performance, not making a sound. Judging that – and reacting appropriately – was the major challenge.”

“The D5 is a nice sounding desk. Things have moved on a bit now with the SD7, but the D5 is still a great sounding board. The software has all the features that next generation boards have, but it’s still easy to use. You can dial in stuff in no time at all,” said Dave. 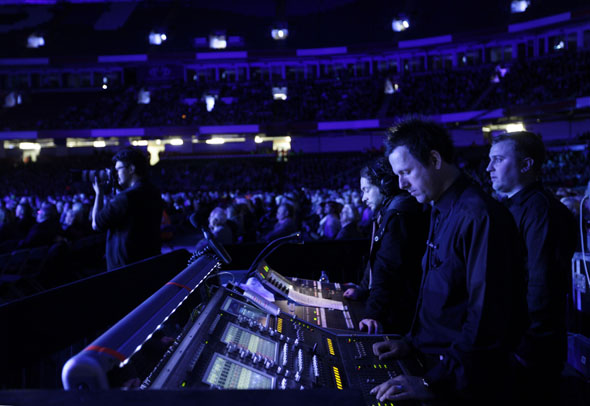