This Is Spinal Tap Turns 25

Tough day, the other day. Needed a laugh. Been thinking about Spinal Tap lately, so…

I Google “This Is Spinal Tap” and land on imbd (Internet Movie Database) and read:

Problem solved; in fact, I go straight from chuckle to snort, completely bypassing laughter, because it all comes back – the accents, the alternating earnest and vacant looks – just the sheer good goofiness of it all… 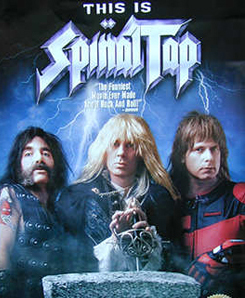 “TWENTY-FIVE YEARS? NO WAY! YOU’RE KIDDING! IT CAN’T BE THAT LONG!

And/or I’m getting older faster than I want…

Are you reading it with Nigel’s inflection? Envisioning Marty’s skeptical/bemused look? “Mach piece”? And that title…

I’ve seen Spinal Tap at least 10 times, many of you probably more. The last time, I introduced it to my teenage son, and he “gets it” as well. In fact, he and I may well watch it again this weekend.

And maybe that’s why it’s hard to believe that Spinal Tap has been around for a quarter of a century. Since it was introduced, a good many of us have seen it often, frequently even, and so much enjoy seeing it yet again when we show it to others… 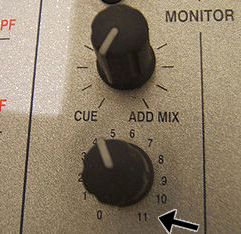 Because it’s hilarious, and because it’s timeless. And because while it has a rock ‘n’ roll backdrop and hits all the right notes in that regard, it’s also about us. People, and our egos, cluelessness, self-involvement…

If, by some remote chance, you’re reading this and haven’t seen This Is Spinal Tap, by all means buy it, rent it, borrow it, whatever. It’s the best money you’ll ever spend in a tough economy, because you can’t put a price on true, honest, can’t stop laughter.

And those of you who are ready for yet another revisit to the world of David, Nigel and Derek, of drummers that spontaneously combust and metal detectors that work all too well, of Stonehenge and the Druids… you know exactly what I’m saying.