Polaris Scala is the node where all aspects of the Evolution system’s simultaneous audio processing operations originate and come together. It’s where controllers are connected via Ethernet or Wi-Fi, resources are allocated for the tasks at hand, and where signal sources and output devices are connected.

Each Polaris Scala DSP unit can process up to 256 inputs, 128 matrix channels, and 256 output buses that connect to the outside world via MADI. For larger projects, several DSP units can be cascaded to control several thousand channels.

Controllers like Polaris Evolution’s 16-fader Access module, the Polaris View motorized multi-touch screen, computers, tablets, and smartphones can be connected either via IP/Ethernet or Wi-Fi. The number of controllers can be selected as required, depending upon the nature of the project.

In a multi-user setting, operators have their own monitoring and talkback lines. For rental companies, the Polaris Evolution’s flexibility enables them to cater to a host of applications with a single system.

With an intuitive design and surprisingly small number of menus, operators can select the desired channels rapidly and adjust all the required system settings.

“For the first time, users can forget about channel numbers,” says Salzbrenner’s Dominik Stepanek, the project manager of the Polaris product family. “A clever routine selects all drum kit-related channels, for instance, and assigns them to the touch-sensitive user interface where they can be edited.”

Polaris Evolution’s user interface has been streamlined to such a degree that most tweaks and adjustments can be performed in the same familiar way. By default, all channels provide the following audio processing functionality: 6-band EQ, delay, compressor, limiter, multiband compressor, and de-esser. Polaris Scala enables users to create redundant mixing systems within one and the same 3U rack unit, or to set up hardware redundancy based on two separate racks.

The Polaris Evolution cloud-based audio mixing system consists of the Scala DSP unit, the Access 16-fader module, and the View motorized multi-touch screen. With hardware reduced to the bare essentials, this cloud-based system with new software is both future-proof and maintenance-friendly. Adding new functionality requires no hardware modifications, and pinpointing all aspects of the system’s operation is quick and easy. Evolution is built on a software framework that will serve as the core for all future functions.

Arnie Toshner, vice president of sales & marketing for Salzbrenner, states, “As a cloud-based audio production tool, we at Salzbrenner believe our Polaris Evolution system addresses the requirements of today’s audio professional, whether it be for broadcast, live performance, AV applications, and more. As these disciplines frequently overlap, we’re confident that the system’s connectivity, flexibility, expandability, and the ease with which new functionality can be incorporated combine to create a mixing system that not only addresses the requirements of today, but well into the future.”

Pricing and availability for the new StageTec Evolution cloud-based audio mixing system have not yet been announced. 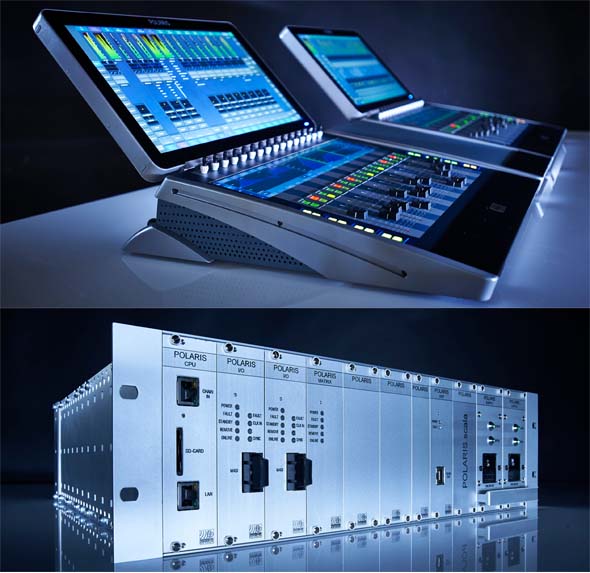