Evaluating a handy versatile measurement microphone in the shop and most importantly, in the field.

As an audio technician, my ears have the final say in how a system is tuned, but with the passing of time, they’re not quite as reliable as they used to be.

As a result, I’m increasingly relying on measurement systems to help with dialing in the PA. I also utilize SPL apps on my phone and iPad to help monitor volume levels, and that’s worked out well.

So when I first saw the iSEMic 725TR measurement microphone from iSEMcon, it appeared to be a potentially great tool for those like me who are utilizing phones and tablets in their work. (By the way, it’s also compatible with computers and hardware audio processors.)

Based in Viernheim, Germany with a marketing and sales office in Ohio, iSEMcon has two divisions: one manufactures capacitive proximity switches and liquid level sensors, and the other designs and produces respected measurement mics, sound calibrators, and accessories.

The Package
The iSEMic 725TR has a compact stainless steel body measuring 0.25 inches wide and 3.75 inches long with an SMB male connector on the end. It’s supplied with an SA-iBF adapter for use with iPhone, iPad and other handheld devices that follow the CTIA/AHJ standard.

In addition, the SA-SBF adapter is available as an option for application with smart phones and tablets that use the OMTP standard for the headphone/mic jack. Another option is the SA-XBF adapter for XLR. 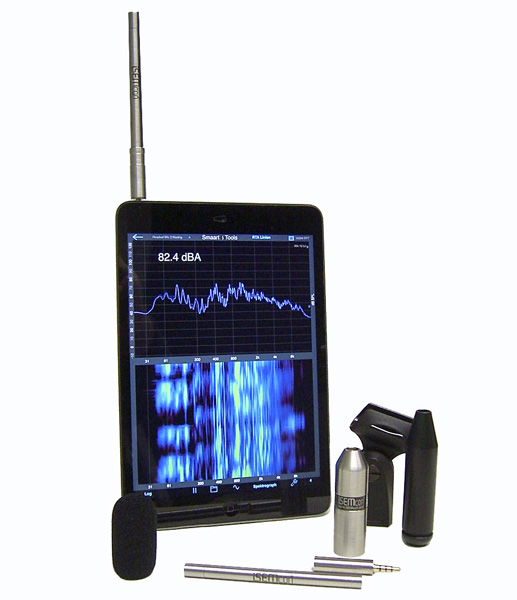 Like the mic body, all of the adapters are made of stainless steel. The stated frequency range of the 725TR is 20 Hz to 20 kHz. Sensitivity is 3 mV/Pa, and it can handle high sound pressure levels, up to 125 dB (SPL). Phantom power (12 to 52 volts) is required. Calibration data files are included with each mic, and the data is ready for use with Rational Acoustics Smaart software.

The 725TR base kit includes the mic, SA-iBF adapter, and a windscreen, all housed in an aluminum case. The optional SA-SBF and SA-XBF adapters can store in the case as well. Other accessories include a shock-mount mic stand clip, extension rod, and cable assemblies.

Opening the case, I was surprised at just how small this mic is. At only a quarter of an inch wide, it’s about the width of a standard pencil. The mic and accessories both feel quite rugged and should easily stand up to the rigors of the road.

The mic attaches to the adapters with a snap-on SMB connector. It’s easy to push in, and is held firmly in place until a good tug is applied to release. After being snapped into the SA-iBF adapter for use with my phone, the mic ended up being about 4.75 inches long.

A closer look at the 725TR mic. (click to enlarge)

I already keep my iPhone and iPads inside rugged cases, and sometimes larger plugs don’t fit into the headphone jacks of these cases. But the thin SA-iBF adapter, barely wider than the mic, had no problem fitting.

My “go to” app on both devices is called RTA, a real-time analyzer that can also measure SPL. The main problem with it (and any app used with a phone or tablet) is the limitations of the mic built into the devices.

For example, while the mic in my iPhone is pretty good, it’s limited to 105 dB, and further, Apple has placed a high-pass filter in the circuit that rolls off the low end. As a result, it’s not really suitable for measurement (or music recording for that matter). The 725TR solves this limitation, and I found it to work quite well with the RTA app as well as my other apps.