The 63rd annual contest was broadcast live in May from the Altice Arena in Lisbon, Portugal, with Riedel’s MediorNet real-time media network providing redundant and decentralized signal routing and transport from start to finish. Through tight integration with MediorNet, Riedel’s Artist digital matrix intercom system and Bolero wireless intercom provided reliable communications for crew and performers.

Over its six-decade history, the Eurovision Song Contest has become one of the most-watched nonsporting events in the world, with this year’s broadcast reaching an estimated global audience of around 200 million. For all three broadcasts, including the semifinal on May 8 and May 10 and the finals on May 12, Riedel supplied the signal and communications backbone for Videohouse, which produced the show’s world feed on behalf of EBU and Portugal’s public broadcasting company, RTP. Riedel also supported the production with a 25-member onsite engineering team. 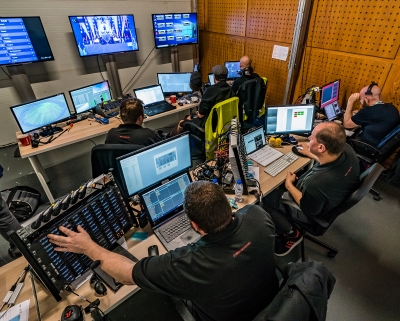 “I was heavily involved with setting up a long-term contract between EBU and Riedel,” says Ola Melzig, head of production for the 2018 Eurovision Song Contest. “Pretty much every single OB truck in Europe that is big enough to do a Eurovision, has a Riedel mainframe installed. This means that everything you connect to this truck needs to be Riedel gear, for it to be 100 percent compatible. So, since the delivery of radios, intercom panels, commentator panels, accreditation, fiber backbone, and signal distribution are static from year to year, it made all the sense in the world to set up this deal, since it generates significant savings both for this year’s host broadcaster, and future ones. In addition to that package, we also bought the whole IT solution from Riedel, so we had a one-stop shop for our digital ecosystem. It was absolutely perfect.”

The Riedel MediorNet backbone consisted of six MetroN core routers, 24 MediorNet modular frames, and 30 MicroN high-density media distribution network devices. Deployed in a decentralized configuration, the MediorNet network ensured fully redundant distribution of all video and audio signals for commentary, intercom, signal distribution, and radio communications, including the feeds for monitors in commentary booths and for displays and projectors in the Altice Arena.

For the first time at the European Song Contest, Riedel deployed a complete solution based on Session Initiation Protocol (SIP) to support commentary booths for almost 30 countries covering the contest for their local audiences.

In addition, DECA, a Riedel subsidiary, provided an access control system designed to simplify guest and crew entry into the arena, boost security, and provide efficient visitor management. The system required personnel to pass through turnstiles where their accreditation cards, embedded with RFID chips, were swiped with stationary or wireless reading devices, and the RFID data was matched to an online database. Also, Riedel once again worked with partner TPO to provide a comprehensive IT and cybersecurity infrastructure, including all switches, servers, and 170 wireless access points, for up to 2,000 journalists in the press center.

“The European Song Contest has become a massive undertaking, but our team lives for this type of large-scale, immensely complex challenge. To really appreciate what Riedel and Videohouse pulled off for this year’s show, take a look at some of the numbers — more than 5,000 buttons spread across 200 comms panels, over 800 intercom users, and a record-breaking 46 km of fiber cable,” says Benedikt Leister, project manager at Riedel Communications. “We can’t wait to see what the producers have in store for next year, but we’re confident that our MediorNet, Artist, and Bolero technologies will be up to the task and provide the robust and reliable infrastructure needed to deliver a dazzling and memorable show.”