The main 60 acre campus of Ontario’s College La Cité opened in 1995, and until recently it consisted of 10 pavilions. With the September 2018 opening of its new 34,000-square-foot Excentricité technology and entrepreneurship pavilion, the innovative school has taken another leap forward.

Excentricité is in the center of the campus, and The Studio is in the center of Excentricité. The 4,000-square-foot multi-use space enables immersive multimedia experiences, thanks to a 360-degree projection system with a 252-foot screen from Strong MDI, 12 HD Barco projectors UDX-W22, one 4K Barco UDX-4K32, a multimedia server from Immersive Design Studios “Canvas” and a surround audio system that features Renkus-Heinz Iconyx IC Live digitally steerable line arrays. 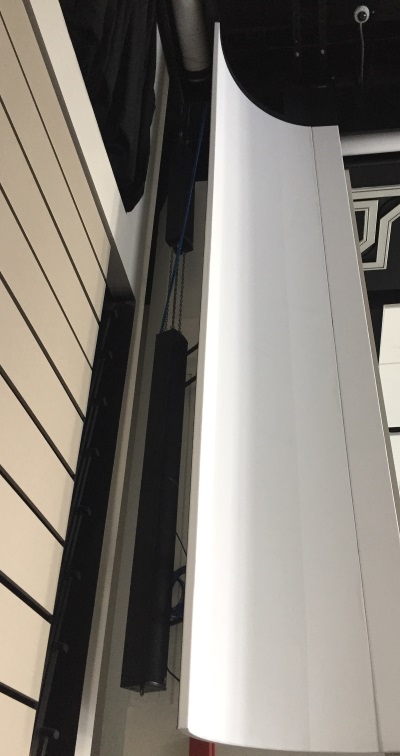 “CBCI was contracted after construction was completed in the spring, and they installed all the projectors, rigging, performance lighting, and so on,” St-Onge details. “They brought experienced people in to make sure everything was done properly.”

St-Onge was familiar with the Renkus-Heinz Iconyx Gen5 IC8 and IC16 digitally steerable arrays because of a previous design he had done in upstate New York. “The Iconyx Gen5 arrays sounded very good, and the client liked them,” he recalls. “But I had not heard the IC Live Gen5 until Bill Coons of Contact Distribution, Renkus-Heinz’ Canadian distributor, suggested I listen to it. The IC Live had the output needed for our design and was just what we were looking for. As soon as we turned it on for the client, the client said ‘wow, that sounds great!’ So that was one thing settled.”

St-Onge specified four Renkus-Heinz IC Live Gen5 ICL-F-DUAL arrays, one in each corner of the theater, suspended nine feet above the floor. “We have a Renkus-Heinz IC215S subwoofer mounted above each ICL-F-DUAL, at catwalk level, to make each column a full-range channel,” he describes. “We also specified two ICL-F-RD column arrays along the sides, about halfway back and hidden in the pillars, each with a single Renkus-Heinz CA112S subwoofer. There’s a second level for when the telescoping bleachers come out of the back wall, and there we have two more ICL-F-RD columns above the rear pair of ICL-F-DUALs.”

The Renkus-Heinz arrays are Dante-enabled, as are the system’s Rio 3224-D and 1608-D I/O boxes and Yamaha Rivage PM7 console with video materials and audio tracks controllable via QLab.

“Rigging the speakers was challenging because the speakers sit behind the wrap-around projection masking screen,” St-Onge observes. “We put the cinema fabric screen on top of a perforated projection surface so the line array audio can go through. Placing the screen two inches behind the material proved optimal for the line array, which is about seven and a half feet behind the screen. Basically if projected light can go through, then the sound will go through. When we installed it, I was pleasantly surprised that it worked even better than we expected.”

Another challenge was how to mix in The Studio. With its multi-channel system, the audio can follow the image for virtual reality playback and other immersive applications. “There’s an additional system of point-source speakers with a d&B Soundscape system for immersive sound,” notes St-Onge. “The challenge was the level of complexity we wanted in this room. We can send a cross line to the Soundscape and then to the Renkus-Heinz loudspeakers, or we can go directly from the Yamaha console to the Renkus-Heinz system. If we have a virtual reality media project from a server, the sound can go from there to Q-LAN, and that can define location to the Soundscape so the sound follows the image.”

Air walls surround The Studio, forming a square. Two semi-circular outer areas, separated from the main theater by the air walls, are served by six more Renkus-Heinz IC8-RD arrays, mounted on pillars. The arrays can be used as part of the show when the air walls are removed to expand The Studio. Six customized Renkus-Heinz TA82-RD-SP1030 loudspeakers provide low-frequency support for the IC8-RDs, while presenting a small footprint. The TA82-RD-SP1030 is a modified version of Renkus-Heinz’ TX/TA82 two-way Complex Conic point-source loudspeaker with a third eight-inch low-frequency driver instead of a central horn.

The new immersive systems impressed everyone at Excentricité’s recent grand opening. However, as of this writing, the team is still performing final calibration and programming. “The system works well,” St-Onge reports. “I’m very pleased with what we’ve accomplished in The Studio. Everyone involved did a great job, and the College La Cité has a very special and wonderful space.”