Steely Dan’s Jamalot Ever After tour of North America kicked off in July in Oregon, and coming up on an impressive 56 dates, is wrapping up in late September in Port Chester, NY.

Donald Fagen and Walter Becker are well known to both fans and pro audio folks for being demanding about sound production, so the question must be asked: “What mix of technology and expertise meets their demands for perfection on tour?”

Returning to mix Steely Dan is front of house veteran Mark Dowdle, who mentions that this tour is on the “Bucket List” of many live sound engineers. (Many pro audio journalists too.) “From the beginning of my career, I’ve always been inspired by their timeless music,” he simply states. His extensive credits include Elton John, Gloria Estefan, Fleetwood Mac, Tina Turner and Jackson Brown, to name just a few.

Dowdle is mixing on a 48-channel Midas XL4 console. “Donald and Walter’s requirement of using analog makes the XL4 the obvious choice,” he notes. The XL4 for the tour, supplied by Jim Sawyer Professional Audio Service (New Brighton, MN), is fitted with stereo channels for overheads, Leslie and Nord, plus six effects returns.

“This was the first time I’ve had an XL4 with moving faders for the inputs as well as VCAs, which I use to maintain fader positions,” Dowdle notes. “It allows me to start with a preset from a previous show where I was happy with the mix.” At the console, he’s one of many who have recently adopted Crown Seating’s Stealth Chair, which applies ergonomic principles to provide a comfortable console operator’s chair. 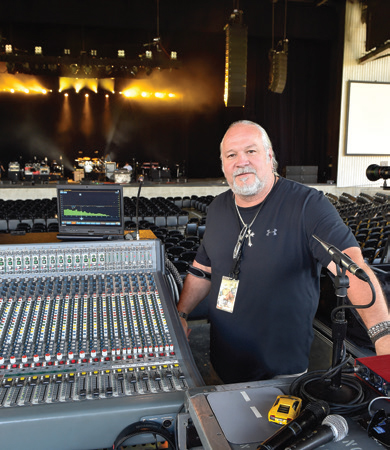 Front of house engineer Mark Dowdle, a portion of his Midas XL4 console, Smaart on the laptop, and a measurement mic at the ready.

Reelin’ In The Years
Also new on the tour is the addition of a Martin Audio Multi-cellular Loudspeaker Array (MLA) main system, provided by On Stage Audio (OSA), which has offices in Las Vegas, Chicago and now Nashville. Dowdle also mixed Steely Dan on last year’s tour, using an MLA system at Ravinia Festival, north of Chicago, the first season of a new OSA installation highlighted by two 12-box arrays in the 3,200-seat pavilion.

“I used most of Pink Floyd’s Martin PA for Aerosmith’s 1977 tour,” he recalls. “The six-week European headline tour I did with KISS in 1988 was with a Martin F2 PA.” 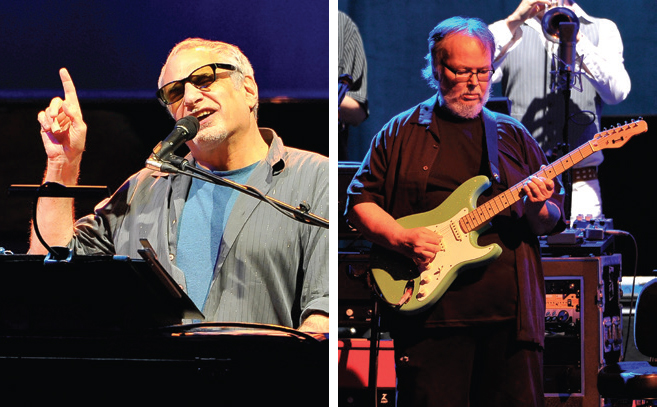 Donald Fagan (left, on an Earthworks SR40V condenser mic) and Walter Becker doing what they do best.

Nitebob introduced Becker to MLA at an OSA demo in New York’s Manhattan Center last October during the AES convention. “Walter heard it, was able to walk around the room and see what the coverage was like, and asked them to play different types of tracks through it,” he explains. “The coverage is really good.”

Steely Dan often plays theaters where the mix position is underneath a balcony. “I go out there every day and listen to it; that’s part of my gig,” he says. “The thing that really knocks me out about MLA is that you can actually control it so that it’s not splattering off a back wall or clustering up in the lower balcony.”