Powersoft D-Cell504 IS high power amplifier modules have been specified to drive a unique “Wall of Bass” in an Austrian nightclub that provides response to as low as 7 Hz.

The newly-reconstructed Club SUB, in the city of Wiener Neustadt, set out to integrate an optimized low-frequency solution, capable of reproducing a wide range of live and DJ-derived music (Drum ‘n’ Bass, Dubstep and Techno) and arts presentations, as well as workshops and theatrical performances.

And since the 300-capacity SUB is located in a heavily populated residential area heavy emphasis needed to be placed on acoustic isolation to avoid noise pollution. These were the challenges faced by project managers Wolfgang Sauter (from pro performance) and Reinhard Nell (from Lambda Labs).

Speaking of the background to the project, Lambda Labs German based director, Steffen Kroschel says, “The owners’ goal was to achieve a similar sound performance as it had in the Grelle Forelle Club in Vienna. Given the concerns of local residents, when Mr. Sauter surveyed the building, with its tube like architecture, the abstract idea of a ‘vibrating wall’ became more logical.”

He contacted Lambda Labs, where Nell supported the concept with simulation data, parameters and measurements, applying his knowledge of high-performance concrete “closed box” enclosures and amping. The drivers were developed especially for this application, going through 10 prototype stages, while the club owners helped with casting the concrete loudspeaker enclosures. 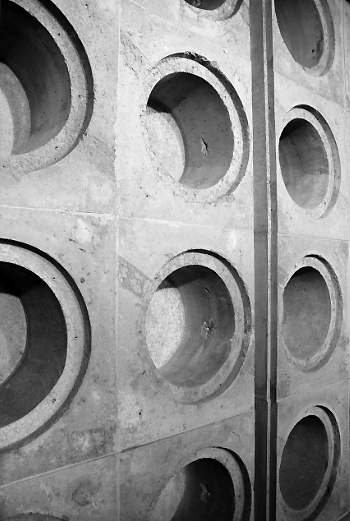 “It was extremely difficult to handle these enclosures with small forklift trucks and build the 50 cm deep low frequency absorber,” Kroschel says.“Behind the wall is sand, and under the wall, Mr. Sauter chose material that is used for highway construction.”

Each concrete block serves as loudspeaker enclosure with pressure-resistant rear chamber which implements the optimized impulse response of a “closed-box” design and maximizes the radiation resistance of the woofers through the acoustically hard surface.

A self-enveloped 15-inch loudspeaker was produced and adapted to the unusual demands of this project. The single chassis are designed to act together like one single swinging wall, in a similar principle to a piston in a cylinder.

Kroschel explains the concept further: “A perfect plane wave is created in the interior of the club, which naturally moves along the side walls and doesn’t induce any room modes. The rear of the main floor was converted into a single bass trap to absorb the incoming wave. The SUB thereby achieves an acoustical result that could never be reached even outdoors.”

And as for outside, there is virtually no noise escape, with both Nell and Sauter agreeing that “such an operating range and evenness of the low frequencies is overwhelming.”

Read More
Clearing Up The Mystery & Confusion With Amplifier Power Ratings
Pages: 1 2
1 2Next »