Marking the beginning of the 2018 festival season, PK Sound recently touched down south for its third year in a row at Insomniac’s 2-day Electric Daisy Carnival Mexico outdoor festival.

DJs from around the globe gathered at Autodromo Hermanos Rodriquez in Mexico City. Acts like Marshmello, Dillon Francis, Tiesto, Erik Prydz, Jauz, Slander, and The Boombox Cartel provided the musical score in front of ‘the Gaia’ stage production backdrop.

With the help of rental network partners, SoundBox and True Audio, PK provided the sound system for the “kineticFIELD” main stage. With coverage as far as 700-feet, the main system comprised more than 280 loudspeakers, with 88-Trinity and 40-VX10 used to provide an evenly distributed sound field.

The low-end compliment was 120-CX800 subwoofers which were joined by an additional 12-Gravity 30 subwoofers which allowed for coverage throughout the venue. PK’s loudspeakers were tucked in amongst fire effects and fireworks, water fountains and laser features, and gigantic inflatable art.

Improving on successes from previous EDC Mexico deployments, the team added to the depth and width of sound coverage by setting up a total of 12 audio hangs on stage and throughout the main event area. On stage, two main hangs and two lateral hangs each supported 14 Trinity line arrays each. Approximately 220-feet from the stage hangs, mid-field coverage was accomplished with four additional hangs, each with 8 Trinity line arrays. Taking it even further, approximately 430 feet from the stage was another set of four hangs, each with 10 VX10 compact line arrays.

Careful audio placement, tuning and 3D sculpting, using PK’s Wavefront technology, was required to create the perfect listening environment. “We focused the top three Trinity boxes in all eight Trinity hangs to a narrow dispersion, which increased the high-frequency sensitivity and allowed each hang to cover a greater distance,” explains Arlen Cormack, VP at PK Sound. 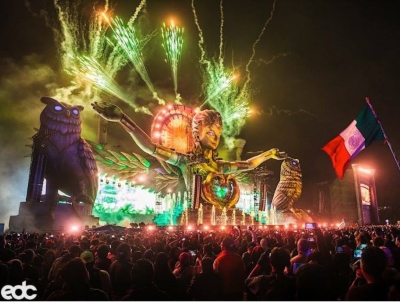 “The two main inside Trinity hangs had to have the side closest to the VIP section focused inward to ensure the VIP attendees were only hearing the ground-stacked VX12 boxes in conjunction with closest stage right lateral extension. We worked hard to provide the perfect balance throughout the listening areas, while at the same time avoiding coherence issues from having so many sources.” continues Cormack.

To accomplish this, engineers used PK Sound’s Kontrol software to steer the sound field away from the VIP section to eliminate the possibility of sound overlap originating from different sources.

For the VIP area itself, two ground stacks each with 6 CX800S and 4 VX12s each were placed directly within the VIP section. These stacks provided a direct sound field to carefully curate the experience for VIP guests who wanted that little something extra. Isolating the sound sources in VIP proved to be worth the extra effort and all fans were able to enjoy quality sound regardless of where they were.

Also in attendance was freelance audio technician and owner of D&M Pro Audio, Alexander Danielewicz who was particularly impressed with the clean and consistent coverage of the Trinity Advanced robotic line array and accompanying Gravity low-end.

“I think Trinity’s power and clarity is astonishing. Coverage is deadly accurate with the actuators and moving horns. The system definitely falls into my top four favorite rigs.” states Danielewicz.

This year’s event was the first time PK Sound brought its new Gravity 30 subwoofers to Mexico. These complemented the main CX800 sub wall, and were placed underneath the mid-field delay towers.