New York City-based company transitions to K and X Series amplifiers for concerts along with the Ottocanali line for church and club systems.

While many audio experts specialize in either live sound production or installations, New York City’s Paramount Events handles both ends of the spectrum.

Always staying abreast of the latest technological developments in the industry, Paramount Events CEO Rafel Narine made a commitment three years ago that allowed him to optimize his live and installed sound systems by investing in Powersoft amplifiers.

“We handle everything from corporate events to festivals and concerts on the live production side,” says Narine, “but we also do a lot of installations at churches, clubs and other venues.”

Narine worked together with Murvin Persaud of MD Audio in transitioning his amp racks for live sound to Powersoft. For live sound applications, Narine explains that transportability and reliability are key. “The efficiency is a huge upsell for me,” he says. “It always makes sense to use the least amount of cabling and trucking possible, and with Powersoft’s K10 amplifier I was able to cut down big time.”

For the recent ECLIPS Music Festival, held in Jamaica, Queens — one of New York City’s five boroughs — Narine brought along a full complement of EAW subwoofers, including 32 double 18-inch subs and 14 double 21-inch subs. “I ran the whole thing on 16 K10 amplifiers without a single issue during the whole festival. Each K10 amp is replacing a full 12-space rack on my old setup, so it’s a big difference in trucking.”

For the next event, Narine wants to integrate Powersoft X series amplifiers to run his top loudspeakers for an all-Powersoft rig that will improve his audio quality and reliability.

“My festivals run 12-hours a day, non-stop, middle of summer in all kinds of weather conditions, and to run an amplifier through that and not have an issue—let’s just say before Powersoft that would have been unheard of,” Narine says, noting that eight of his non-Powersoft amps died during ECLIPS alone. “Between the reliability and the efficiency, Powersoft is a no-brainer.”

In addition to K and X series amps for live applications, Paramount has also worked with Persaud to avail itself of Powersoft’s Ottocanali amps for fixed installations. Many of the fixed installations are churches, which from Narine’s experience can be as demanding as live events. 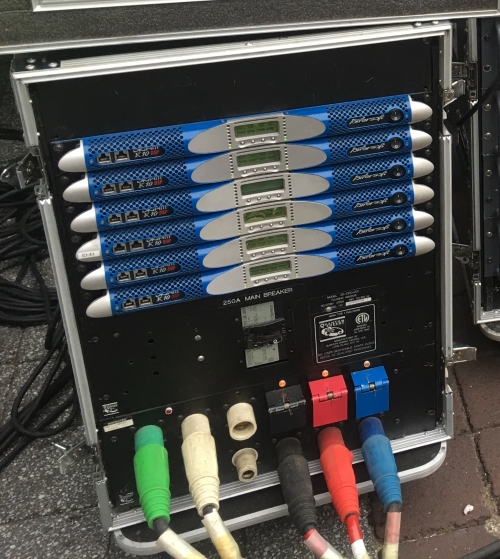 “Along with tours, churches keep equipment running the longest,” he explains. “You’re looking at an average of 20 hours a week times 52 weeks for however many years.” Given the workload, he has encountered reliability issues with past amplifiers before switching to Powersoft. “It’s no longer an issue.”

But it is not always due to the demands alone that other manufacturers’ amps fail to deliver. “I had a church contact me because nine amps died all at once,” he says. “It turns out that there were 130 volts in the building.” His initial advice was to have an electrician rectify their voltage problems, but by replacing those amplifiers with Powersoft amps featuring Power Factor Correction allowed Narine to skirt that issue entirely.

“The Powersoft amps can handle anything from 100-240 volts, and it doesn’t matter if it’s reversed, inverted, hot, neutral, the amps always sees the correct voltage,” he says. Narine is now downsizing that nine-amp rack to two Ottocanali 4k4 amplifiers, boosting reliability while saving on space. Powersoft’s 4-year warranty is also a strong selling point. “It just goes to prove that these amps are built to last,” he says.

Sound quality is also of the utmost importance in church installs, and Powersoft amplifiers have lifted the veil off of liturgical music recordings and other audio that has been in use for years at some locations. “After we upgrade to Powersoft, it’s like night and day. My clients are telling me they’re hearing things that they haven’t heard before,” Narine says. “Same songs, same music, same speakers, different details.”

For another of Narine’s church installations, 22 amplifiers were replaced with three Powersoft Ottocanali 4k4 amplifiers. “What really boggled the client’s mind was that we went from need a 400 amp circuit to only needing three 20 amp circuits,” Narine said. “It almost seems impossible to cut down on power draw that much, but Powersoft makes it possible.” Aside from saving on electricity bills due to the amps’ current draw, additional savings come in the form of reducing the burden on climate control systems. “The amount of heat generated by three amps versus 22—it’s a huge savings on air conditioning and space with Powersoft.”

Narine is also an avid user of the DSP tools offered on his K series and Ottocanali amps by way of Powersoft’s Armonía software. “I maximize the capabilities of the gear,” he says. “Whatever options are in there, I use them.” These powerful software tools help him make sure he is achieving peak performance in any environment under any conditions. “Armonía provides me with tuning, limiting, compression, crossovers, power/voltage limiting, input amperage, and I use it all. It’s great.”

In addition to large events and festivals, Paramount Events’ upcoming projects include mega-church installations. With Powersoft in his corner, Narine has the tools he needs to deliver for his clients, no matter the scale.

“My success rate in terms of client satisfaction is 100% with Powersoft,” he says. “The sound quality, it has to be up there, and they’re getting that, plus the efficiency and reliability. Some manufacturers are trying to release speakers that are only compatible with their own brand of amp, and that’s out of the question for me. If it doesn’t work with Powersoft I have to step away.”

Episode 55 features a conversation with Alexandria Perryman, a live broadcast engineer and Emmy winner working at NASA’s Johnson Space Center, where one of ...read more →