As AVLI’s James Reed points out, “rácket is a new build and the first high end place in Wynwood. The venue has Martin Audio everywhere––all the way down to the restrooms. We wanted to provide a flexible system that would be great for live performances and bands as well as DJ’s with consistent, high quality audio with no dead spots anywhere you walk.

“The main dance floor/bar area includes two Martin Audio THV’s for the main right and left stage PA system with two CSX218 subs underneath. Then as delays down the right and left sides of the main room, we installed two CDD8’s with four Blackline X210 subs underneath. We also put in four CDD12’s in the front bar area and another CDD12 for the pool table area stage left. 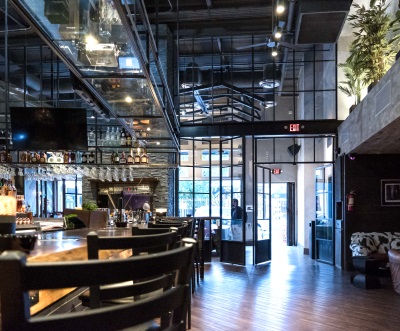 “Then there’s a separate private room upstairs where people can hang out that can be combined with the music downstairs or self-sufficient,” Reed continues, “and that has four CDD12’s for high-mid frequencies and four CSX118’s for subs. Plus all six bathrooms have a Martin Audio C6.8T speaker.”

Michael “Mikey” Callahan, Reed’s colleague, friend and stylistic polar opposite at AVLI, adds: “rácket’s a place where you can dress up and still have a good time. Originally, they were going to be heavier into live music so we gave them a system that creates a sound image from the stage with the stacks, CDD8’s and X210 subs as delays from there out into the room.

“Then, of course, they switched to more of a DJ-focused experience, but the system we designed handles everything without a problem because there isn’t that much of a throw to begin with. Now they’re back to live R&B and Funk bands, so they’re covered either way because of the CDD’s wide dispersion, audio quality and amazing coverage.

“It’s a challenging room to keep everything sounding tight and together because the high ceilings, reflective surfaces and lots of glass tend to make audio go all over the place. Even though a distributed system that covers the bleed-off, it wasn’t the easiest room and layout to work with.

“We also had to be creative about sub placement because real estate is at a premium in this type of club so the fact that the X210’s are super low-profile worked out great. They can be hidden away under sofas and they do a really good job, we’re very happy with them. Overall, the system sounds really good,” Callahan sums up. “it’s very much in your face and warm but doesn’t give you a headache after two hours like so many other clubs in Miami.”

Our client’s really knocked out,” adds Reed. “They’re not used to an audio system of that caliber given the quality of components and how the system design works so well for the space. They’re pleased because the club’s business is off the chain, it’s really taken off on Thursday, Friday and Saturday nights with people lined up down the street just to get into the place and the audio system plays a major part in that success.”