Front of house engineer Shane Bardiau took the helm of TOP’s live sound in 2015 a few months before the release of the Blurryface album. For Bardiau, the LEO Family system has proven an important tool for keeping potential audio chaos under control and delivering undiminished aural impact to the audience. 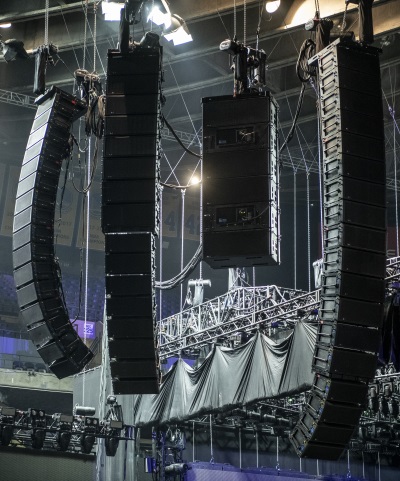 “I first heard a LEO system at a PA listening exercise that VER hosted a few years ago,” he recalls, “and I remember walking back to the far 300 section of the arena. I was blown away by how ‘in your face’ the LEO system still sounded, and the controlled low end. That’s when we decided to take a LEO Family system — which was based on the LYON line arrays for more flexibility — on our mixed venue 2016 tour. But this time, since we’re doing all A-level arenas, we’re anchoring the mains with the larger LEO boxes.”

No matter how loud the TOP crowd — and it does get frantic at times — Bardiau is confident he has the headroom to handle it. “LEO is one of the very few boxes that I’ve used for mixing this artist where I can push it up to a high SPL on the meter, but it doesn’t hurt.”

For system tech Sellars, the upgrade to the new GALAXY processors for this tour has proven a welcome plus. “I really appreciate having the phase correction settings available for every box,” he says. “My phase traces are gorgeous and that makes me happy.”

For his part, Bardiau gives high marks to the system’s low end. “One of the deciding factors for carrying a Meyer rig was the 1100-LFC. I’ve never heard a sub so controlled in an arena environment. It’s easy to keep my mix from getting muddy, which is no easy feat in a ‘boomy’ arena.”

Bardiau lavishes similar compliments on his sidekick Kenny Sellars and tour audio provider VER. “Every day Kenny and his team get everything sounding incredible despite the unique challenges of different rooms,” he says. “I haven’t been doing sound checks yet every night sounds like the night before. And VER is always on top of things. I always get what I ask for and their gear is top of the line. That kind of support is priceless.”

Feeding into the Meyer rig’s GALAXY processors is a DiGiCo SD5 console augmented with a raft of Waves plugins, including C6 multiband compressor, API 2500 compressor, SSL Master Bus and MaxxVolume. The wireless mic system is Shure Axient Digital, with a Shure KSM9HS capsule on the lead vocal mic.

When asked what is most satisfying about mixing TOP’s performances, Bardiau responds: “From the opening song to the close of the show, the music takes you on a journey and tells a story. I feel privileged to be the medium connecting artist and audience. I help make sure everybody hears and understands the message, and feels the impact. It’s refreshing to be part of something so positive in what often seems a very negative world.”

Sellars offers similar sentiments. “Those two guys give it their all every night and I’m proud to be a part of it. Coming to this show is worth it even if you don’t know — or even like — the music.”

The Bandito Tour kicked off in Nashville on October 16, touched four corners of the country in Washington (Tacoma), Florida (Sunrise), Massachusetts (Boston), and Southern California (Inglewood), packing 21 additional arenas in between before wrapping up in late November in Kansas City.