After producing the US Open Squash Championships in Philadelphia for seven years, IMS Technology Services noticed a distinct improvement in the audio quality after switching to Martin Audio CDD-LIVE loudspeakers for this year’s event.

As IMS director of audio, Chris Leonard, points out, “We definitely upgraded the speaker coverage with the Martin Audio CDD-LIVE 12’s and 8’s. They had a major impact on the environment with their low-end extension and consistent wide coverage. There’s no good place to put subs at this event, so having a speaker with the low-end power of the CDD-LIVE series really helped us out with adding excitement to the audio quality and coverage. This was the 7th year we’ve done this event and by far the best sounding one yet.”

The Championships take place at Drexel University’s Daskalakis Athletic Center with a custom ASB glass squash court placed in the middle of the gymnasium floor with the audience of just over 1,000 surrounding the court on all sides. IMS, a nationwide company that does full scale production for corporate, higher education and performing arts along with corporate AV installs, has produced this one-of-a-kind event since it moved to their home base in Philadelphia.

This was also a breakthrough year in that the Egyptian male and female champions – Ali Farag and Nour El Tayeb – made history as the first married couple in sporting history ever to win the same major sports title on the same day. 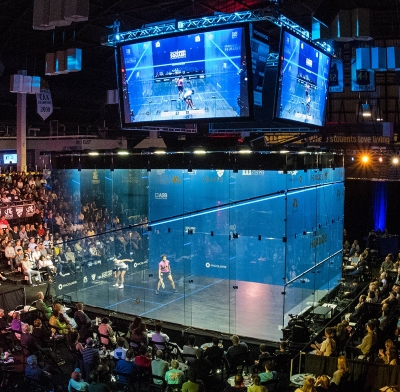 Continuing his discussion of the audio challenges for the championships, Leonard explains, “There’s a referee on a headset mic in the center of the gym just outside the glass court and he has to be live the whole time and loud enough to be clearly heard by the players and everyone in the place because he’s calling the score and in constant communication with the players.

“Then they have an emcee that does the player introductions, lots of live music stings, and the need to maintain a pumped-up environment for the presentation. So, in between match play, there’s plenty of high energy music and lots of lights flashing.”

According to Leonard, budget and logistic limits eliminate options such as line arrays, “but the ability to maximize the return on investment with CDD-LIVE was very helpful. What’s nice about these speakers is the wide 110-degree coverage which only required two per side, so the width of the coverage across the space and the low-end extension really gave the show additional excitement and a feel they hadn’t experienced at the U.S. Open before.”

The actual deployment consisted of four CDD-LIVE 12’s with one flown in each corner from a special truss while two CDD-LIVE 8’s were flown over a VIP bar area for additional reinforcement because it was located outside of the main area of coverage. An additional CDD-LIVE 8 was used to assist Leonard in monitoring the event from backstage.

Summing up, Leonard adds, “The Dante networking is great too. I could run the signal in stereo to give it an extra-wide feel. It allowed me to easily distribute signal across the venue with enhanced audio quality and greater flexibility.

“There’s no doubt CDD-LIVE made a big difference because of the coverage and clarity. In the past, we’ve had trouble getting the ref’s mic loud and clean enough across the whole venue but I could do it now across the whole space without any feedback and with great clarity. When I was playing the music and stings, the U.S. Open Tournament director Graham Bassett noticed the low-end energy in the space and mentioned to us that the audio sounded noticeably better than in the past.”