Italian composer and pianist kicks off world tour with his mixture of minimalist neo-classicism and pop adaptations supported by K1 and K2 line arrays.

Italian composer and pianist Ludovico Einaudi has been filling the world’s biggest halls for years with his mixture of minimalist neo-classicism and pop adaptations. In spring 2018, the musician also visited arenas throughout Germany as part of his current world tour before journeying to Asia and North America.

In order to transport Einaudi’s dynamic piano works to the furthest corners of every location with transparency, German service provider satis&fy relied on an L-Acoustics configuration including K1 and K2 arrays along with Kara and Kiva as supplementary sidefill and nearfill loudspeakers.

In contrast to his solo concerts, Ludovico Einaudi brought various musicians on stage for the current tour in order to bring his genre-defying compositions to life in an approach combining both conventional and unusual instruments. “Ludovico’s music forms a homogeneous sonic body that must remain intact at every point in the hall,” explains Lucien Götz, the systems engineer responsible for commissioning the L-Acoustics configuration. “In comparison to rock and pop productions, in which you primarily want to have the lead vocals still present far back, the stage sound should be reproduced here as naturally as possible.” 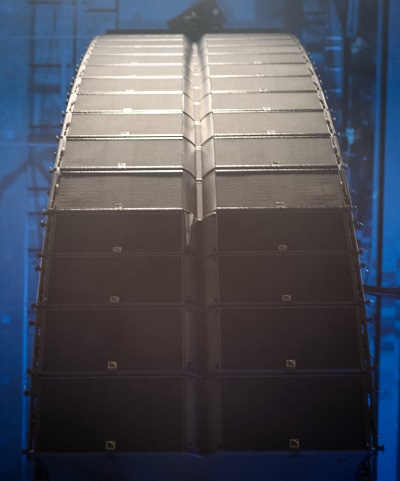 For the main PA, Götz used 12 K1 and four K2 as downfill per side, with two arrays of 16 Kara each used as side PA. At close range, 12 Kiva placed on the edge of the stage as well as on tripods provided lipfill. Outfills were provided by two arrays of three ARCS II.

“When it comes to transparency, L-Acoustics is unmatched for me,” confirms Milo Benericetti, who is responsible for mixing the various sound sources at front of house into a homogeneous body of sound. “Ludovico’s compositions are actually designed for classical concert halls. With the L-Acoustics system, however, I am also able to work out all sound details in large halls.” Benericetti has accompanied the tour on close to 250 shows worldwide, often relying on the house PA, but expresses that, “Most of the time I find L-Acoustics and, of course, it’s my first choice.”

In addition to Ludovico Einaudi’s piano positioned centrally on the stage and various strings, guitars and percussion instruments, a Moog synthesizer provided pressure in the low frequency range. “The SB28 subwoofers were primarily used as effect systems for individual instruments and were only used in specific concert phases. The K1 therefore provided the bulk of the full-range sound reinforcement for almost 70 percent of the hall area,” says Götz. The SB28 were set up in a “tooth gap” pattern and were laid flat on the floor centrally in order to achieve even coverage and the lowest possible load on the stage. “As a special feature, I turned a double stack on each side of the stage 70 degrees outwards to cover the side ranks—so it’s not a classic tooth gap.”

In addition to the sound quality, which is particularly important in this kind of production, the extensive L-Acoustics system also convinced in logistical terms. “We had all the audio material, including PA, in a single trailer on the road,” says Götz. “Moreover, the handling is simply outstanding. From unloading to assembly to system check, it took our team of four people just under 90 minutes. This makes not only the technician happy, but also the customer.”