The BBC Proms is one of the most British of musical institutions. Founded over a century ago, it is an eight-week summer season of concerts, predominantly held at the Royal Albert Hall (RAH), with Cadogan Hall hosting chamber music, and Proms in the Park events held across the UK on The Last Night of the Proms.

For this year’s series, Delta Live has deployed L-ISA Hyperreal Sound from L-Acoustics, giving the system its Proms debut and audiences an intensely real audio experience.

Delta Live’s association with The Proms stretches back nearly two decades with Sound by Design, now incorporated into the Delta group, first working on the events in 2000. Delta account director Stephen Hughes has worked on every season since 2004, has an intimate knowledge of the Royal Albert Hall, and has deployed many a standard stereo system there.

This is not the first time L-ISA has been deployed at the RAH ‑ the system was used earlier in the summer for Angus and Julia Stone and the Classic BRITS ‑ but it is the first time for Delta and for Hughes, who was keen to put it through its paces in the iconic location. 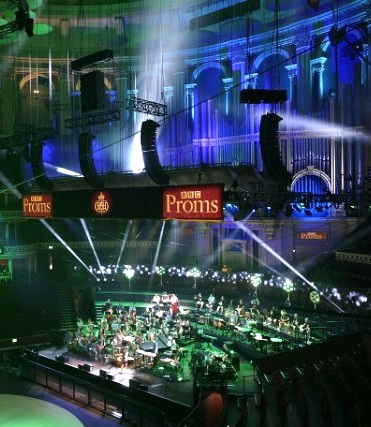 “This is an acoustically tricky venue, and we have refined the design of the systems we put in here over the years, most recently upgrading to an L-Acoustics K2 system to do as much as we could to overcome the room’s reflections,” says Hughes. “That worked well but, with L-ISA, the thing I noticed was that we were not fighting the room anymore. That’s a first.”

This significant effect is because the energy between the loudspeaker hangs is distributed evenly and has allowed the Delta team to, as Hughes puts it, “get a proper perspective on everything.”

“It’s a fantastic listening experience,” he says. “In fact, I don’t want to go back to using a stereo system, especially in a circular room like this; L-ISA is the right way to go.”

Delta’s L-ISA configuration comprises five arrays of 15 L-Acoustics Kara each, positioned equidistantly across the stage, along with four KS28 subwoofers flown centrally. This configuration places 60% of the audience in the ‘L-ISA zone’, the area of coverage which fully benefits from Hyperreal Sound imaging. A conventional mono fill system covers the remainder of the venue. “That’s excellent for this venue, particularly bearing in mind that we had restrictions on the positions of the rigging points,” states Hughes.

An X12 was placed either side of the stage, with four X8 positioned across the stage lip as front fill for the first few rows of the audience.

A DiGiCo SD5 sat at front of house and the shows were mixed using the console’s native L-ISA Desk Link interface, which connects directly with the L-ISA Controller and outputs to the L-ISA Processor, which Hughes has found intuitive and flexible. 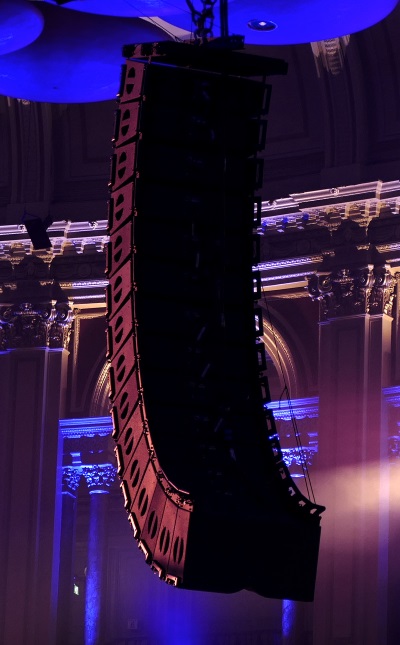 “The L-ISA Desk Link on the SD5 has been absolutely amazing,” he says. “L-ISA is very adaptable; the 96 inputs it gives you means that you’re not thinking too much about pairing things to groups. The benefit you get from being able to apportion different sections of the ensemble to different hangs gives a different perspective. It also means less clutter.”

“We went to WOMAD to watch them before they came here,” he says. “They were using a conventional stereo system and it was very apparent that it was hard to get vocal definition, which was fighting in each loudspeaker hang. At the RAH, it’s always been hard to lift anyone giving a small amount of dynamic input over the cacophony of a room spontaneously erupting in applause. Using L-ISA, we managed to put the vocal dead center and build the ensemble around it. This meant that when the keyboardist talked very quietly into his microphone, even with over 5,000 people clapping and screaming, we heard every word. That’s extraordinary for a PA.”

The concert also had an extremely loud stage with a large number of monitors. This would normally mean turning the front of house system up to overcome the stage noise, but L-ISA technology was able to complement, rather than fight, the on-stage output. Achieving a clear mix without overpowering the room or deafening the audience became easier.

“At each concert, we’re giving the performance “space,” which means the conductor doesn’t have to worry about the amplification altering their artistic vision,” says Hughes. “You should only ever try to replicate what he hears, and it’s a much easier job with L-ISA.”

“L-ISA is a completely different workflow for engineers and listening experience for the audiences,” concludes Delta’s Paul Keating. “Once you’ve heard L-ISA you don’t want to go back to working with a stereo system. This is definitely where the pro sound industry is heading, which is very exciting.”

All Posts
PrevPreviousEAW Embraces Independence Under New Ownership
NextSubjective Versus Objective: If It Sounds Good, Is It?Next
Top Stories
Explore All Live Sound