Lobby Hero is an intense and intimate study into the human condition and the latest staging of a sharp piece of drama from Oscar-winning writer Kenneth Lonergan. This masterful presentation by Second Stage Theater at the Helen Hayes Theater, with the dramatic action all taking place within the lobby of an apartment building.

“I’ve not done this venue before,” explains West. “It was curious for us, it’s been around a long time but has just been purchased by Second Stage and rebuilt… The acoustic is super intimate, but the bigger challenge was the revolve; there would be no walls in the set for sound to bounce off, that dictated we would need to mic’ up everyone in the cast. The stage is gigantic, but the room is small and intimate, just how you want it. The sound in the room is nice, wide and live. There is space in there; it’s almost unique sounding, a bit like the Booth [Theatre], but there’s something different. It has a lot of width, there is a lot of space around what you hear.”

Charles Coes, West’s associate designer saw an opportunity to solve the conundrum presented by the revolve. “We knew that Lobby Hero was on a turntable and there were early discussions of that turntable being used, at low speed, to constantly change the perspective during scenes. Usually, Darron and I create very, very carefully delayed multizone reinforcement systems and this is tricky on a moving turntable, so my main interest was in the reinforcement. Once we talked about Soundscape and Darron realized that he could use it to create object-based effects rather than manually setting levels he wanted to expand our usage to sound effects too.” 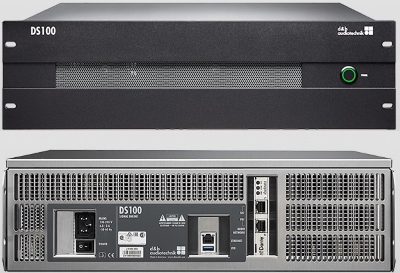 d&b Soundscape is a signal processing engine and matrix – the DS100 – with two optional software modules. For the purposes of Lobby Hero, the En-Scene software option was used to allow West the individual placement and movement of up to 64 sound objects – in this case the familiar noisy environment of a New York street adjacent the lobby.

The deployment of d&b loudspeakers was not so different from how a sound designer might normally address a traditional theater space with proscenium L/R at the upper and lower levels, center cluster and down-fill, under and over-balcony delays, and a surround system across the orchestra and balcony levels, plus subs. The difference is in how Soundscape can affect the delivery, as West and Coes describe.

“We’re not playing music per se,” says West, “but we are playing the sounds of NY – the street noise, the traffic, the people – as the set moves. To be plausible the drama needs to live within those sounds, as we do every day. So from the outset, I saw that as the music of NY and said to Charles that is how I want the audience to experience it. I didn’t know about Soundscape at all, but Charles described it to me and we started talking to Michael Eisenberg, d&b’s Broadway guy. ‘Maybe they will let us beta test it with our show?’ were Charles’ exact words.”

And to Coes delight they did, “d&b offered us great support. Despite it being an early product, it was truly reliable. Soundscape is a unique algorithm built on technology that we’re comfortable with. Dante and OSC are old friends, as is R1, so though there was a fancy box in the middle, we knew how to integrate it into the system and workflow.”

West saw the delivery from d&b Soundscape in very precise terms. “For me, the one thing I did not want was for Soundscape to take a lot of notice. It had to be something integral to the production, not imposed on top of the play. That it has achieved, Lobby Hero remains a show of subtleties.”

Coes agreed, “Lobby Hero isn’t a show that is all about sound or design generally. Trip Cullman, our director, has kept us all focused on the phenomenal acting from every member of our cast. The world exists around them and in transitions around the audience as well, pulling us in.

“Soundscape offered us a user-friendly way to keep the reinforcement and conceptual content focused on them, but also to deliver it to a house with several tricky acoustical zones. The Hayes is, as it is in many Broadway houses, very different under the balcony and at the rear of the balcony. Darron keeps us focused on the story; it’s my job to keep the technology supporting that and out of the way. Soundscape made that easy. It is a slightly different workflow than our usual approach for a straight play so sorting that out took some time, but once we figured out how best to address it, it was simpler than our previous gear choices for large programmable matrices.”

The new workflow certainly didn’t put off West, “I will also say that this was a new theater and we didn’t know how it was going to sound, but that renowned d&b system sound has stayed consistent. That was my get out of jail card, I know how it sounds and I know what it will do. But the thing is, how often do you get the chance to work with something totally new? I’ve known and worked with Charles long enough that when I say to him, ‘What if we….’ he never says no. And d&b supported us with Drew Levy from Applications Support and Michael [the Northeast Regional manager] from the New York office. Between the system and the people, you always feel you have an anchor; and that’s not true with every show I do.” 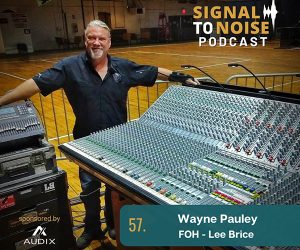