Graceful Performance: Developing A New System For The Boston Ballet

Since its founding in 1963, the Boston Ballet has become one of the leading dance companies in the world, and in 2009, moved to its new performance home, the historic Boston Opera House, located in the heart of the city’s theatre district.

Now, the ballet is also benefitting from a new sound reinforcement system tailored to support its specific performance requirements.

Initially constructed as a tribute to vaudeville impresario Benjamin Franklin Keith and named the B.F Keith Theater, the 2,766-seat jewel first opened its doors in October of 1928, but like many venues of its type, went through various iterations before standing dormant for a long period.

Prior to re-opening in mid-2004 as the Boston Opera House, it underwent an extensive renovation and restoration, with great care was taken to retain the historic character and incredible natural acoustics of the venue when it first opened.

Although the room, with three primary levels (orchestra, mezzanine and balcony), is designed and constructed to provide optimal sound for the spoken word, ballet performances require subtle, “natural sounding” amplification of acoustic ensembles as well as higher volume playback of pre-recorded material.

Additionally, it was necessary for the system to be completely hidden from view so that it not detract in any way from the venue’s elegant décor or the audience experience.

GROUP EFFORT
Based upon a long-standing relationship with the ballet, Talamas Broadcast Equipment was approached about formulating the new system. Previously, the Newton, MA-based systems firm had provided support such as a Telex wireless intercom system and Sennheiser wireless system for use with the venue’s piano. 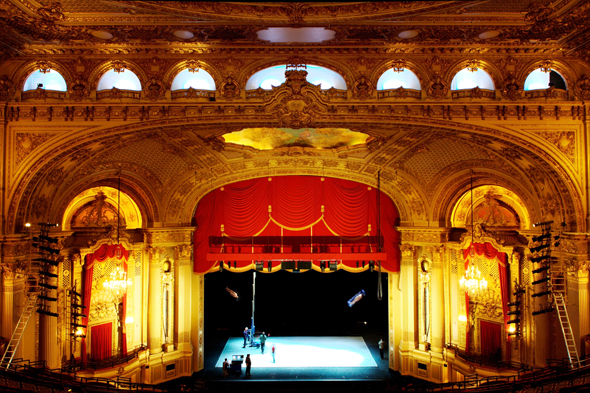 A more full perspective of the Boston Opera House.

“The directive was that the system be completely non-intrusive. There are many things you can do to accomplish that, but we also wanted the best sounding result,” states Boston Ballet production manager Ben Phillips.

A previous experience with traditional line arrays hadn’t worked out well, prompting complaints about negative impact on the venue’s aesthetics. While it was feasible to conceal the line arrays, Phillips adds, it would have compromised sound quality substantially.

An intriguing potential solution was K-array loudspeaker arrays, which upon further investigation, could provide the desired sonic performance while also meeting the need of a low enough profile as to be almost invisible.

As the system design effort progressed, product specialists from Sennheiser USA, distributor of Italian-made K-array, teamed up to with Talamas, the ballet production staff, and front of house engineer Benjamin Young to fine-tune numerous details. 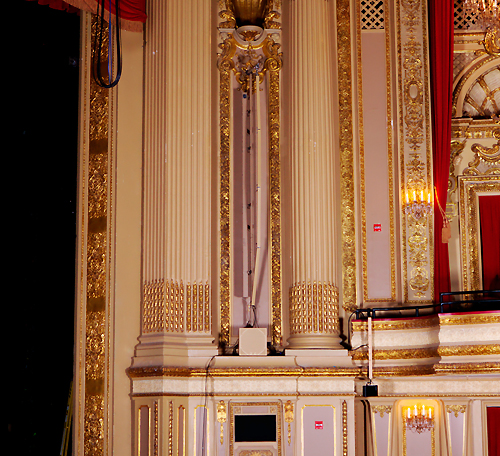 A look at just how well the K-array loudspeakers blend into their surroundings. (click to enlarge)

The final result of that effort includes three K-array KK100 vertical line arrays placed on each side of the proscenium arch to cover the orchestra level and first few rows of the balcony, and two KL18 subs below the left and right main arrays – all custom painted to blend into the décor. Two of the arrays are driven from each channel of a KA10 Class D power amplifier.

“KA10 and a KA40 amplifier drive the KK100s and the KL18s, but it’s an unusual power setup,” notes Talamas product specialist Nick Jabour. “Both are being powered at 120 volts; however, so that we could use a more standard style cable for the power run to the truss, we drive the self-powered loudspeakers at 230 volts.”

Additionally, there are four KH15 active loudspeakers in the air in two arrays of two, as well as two KS4 subs hung next to each other. Another flown KH15 is aimed straight down at the orchestra level to complete the stereo image. These components are hidden from view using acoustically transparent black scrim.