At the helm of Godsmack’s live sound is front of house engineer and production manager Scott Tkachuk, who has been on the road with the band since 2015. For this tour Tkachuk took charge of system selection, in consultation with Godsmack frontman Sully Erna, and their final decision came down to what would provide the throw and control needed for the demands of the tour. 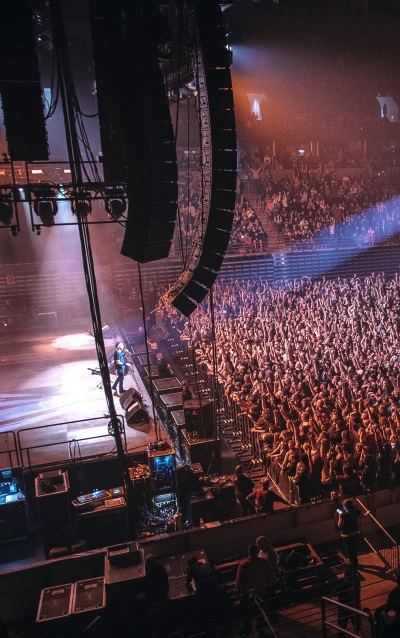 “We had toured with a Meyer LEO rig before and we were amazed at how far it could throw while maintaining clarity and a sense of presence — of being right there with the band,” says Tkachuk.

According to Tkachuk, these qualities were most beneficial at the larger sheds with vast lawn areas that rely on distributed house delay systems to fill in for the far-flung fans.

“Some lawn systems are good, and some not so good,” summarizes Tkachuk, “but even some of the better ones are set up for mono, and that defeats the whole purpose of painting a stereo image. We can have up to 8,000 people on the lawn and they need to experience what I’m hearing at front of house. With the LEO system we can shoot out into the lawns, holding a good stereo image and giving you the feeling that you’re only 50 feet from the stage.”

Recognizing that the front pit can set the tone for the whole show, Tkachuk paid special attention to this area. “Some system designers let this fall by the wayside, but I want the experience down there to be just as good — if not better — than at front of house,” he says. “That’s why I set up the four JM-1P loudspeakers cross-firing across the front, almost like a separate club PA. The JM-1Ps are very high powered enclosures, so can really stick the screws to them. It gives you great stereo imaging and really keeps the crowd fired up in the front.” 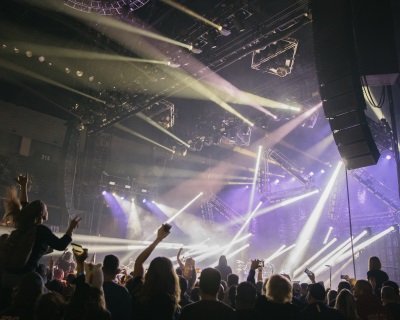 Tkachuk mixed the Godsmack sets behind a Midas ProX console while veteran front of house engineer Tom Abraham worked the Shinedown portion of the show using a Yamaha PM10. Wireless systems were all Shure, with PSM-1000 units for IEMs and a mix of UHF-R and Axient Digital for the microphones.

Tkachuk gives a tip of the hat to systems engineer Erik Rogers for fine-tuning the LEO Family system and precisely conforming coverage to the venue of the day using the MAPP XT system design tool. He also credits monitor engineer Scott “Skitch” Canady and monitor systems tech Kelli O’Connor for keeping the band as happy onstage as the audience out front.

The Godsmack/Shinedown tour kicked off on July 2 in Clarkston, Michigan, spanned across the continent from Massachusetts to Southern California and South Carolina to Seattle before wrapping up in Sacramento on October 13.