Ed Sheeran’s ÷ (“Divide”) Tour has been elevated to Pollstar’s highest ranking tour of all time, handily outdistancing the old marks for both tour gross receipts and attendance totals. As has been the case since the globe-circling odyssey launched in 2017, Sheeran’s veteran audio crew relies on a Meyer Sound LEO Family system.

Production manager and front of house engineer Chris Marsh, who has been with Sheeran since his first headline tour in 2011, has tapped Meyer Sound’s LEO Family as his preferred audio reinforcement solution since 2013. A system provided by UK-based Major Tom accompanied the tour, and was deployed for all shows except for a handful of the more scattered “one-off” performances. 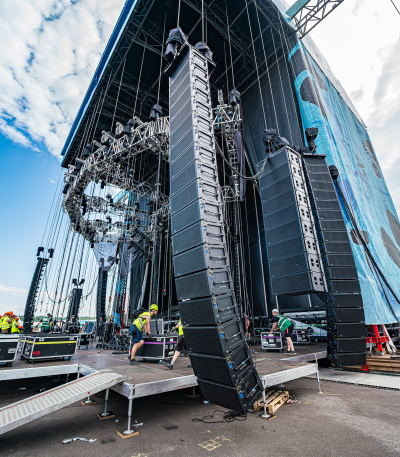 “We started using LEO on the earlier arena tours before we got into stadiums, and the first thing that was really noticeable was headroom,” Marsh recalls. “It seemed like we never would run out of it. Also, the clarity and definition are exceptional. Ed’s looping has many layers to it, and sometimes other PAs just seemed to make noise. With LEO there is a separation in the mix I can’t find in the other systems I’ve worked with.”

Marsh also finds that the LEO Family solution makes it easy to live with himself whilst wearing the two hats as front of house engineer and production manager. “Yes, as front of house engineer I want to have the sound of the LEO Family, and fortunately I can sell that to my production manager hat by the fact that it takes up less truck space. Of course they also take less space by the side of the stage, and in the past we’ve had issues finding space for that extra infrastructure on shows where we couldn’t bring the Meyer PA.”

A somewhat unusual twist on the tour’s final leg (#14) through Europe is the mix of large football stadiums and open “greenfield” sites — parks, fairgrounds and, in Helsinki, a decommissioned airfield. This venue strategy was occasioned, according to Marsh, by the difficulty in finding venues along the route able to accommodate the numbers dictated by ticket demand. It fell to audio systems engineer Charlie Albin to ensure the system was re-adapted to different circumstances on a show-to-show basis.

“A flat greenfield site is simpler than what we do in a stadium, but there’s still work to be done with time and phase alignment, particularly where our main system blends into the delays,” Albin remarks. “Probably the biggest challenge is trying to balance a system of this size over considerable distances, and I’m lucky that with the LEO Family PA we have the tonality from the array is incredibly similar whether you sit 10 meters away from it or 100 meters away. That makes my life so much easier.”

A new addition to the Meyer Sound digital toolkit, Low Mid Beam Control (LMBC) in the latest version of Compass control software, also was welcomed by Albin. “LMBC has been a strong feature on this last campaign,” he attests. “It has enabled us to get smoother frequency response across the entire audience area, and we can do it without using as much EQ. Also, the new way of doing delay integration is a bit more consistent across the various loudspeakers, so it helps us combine the different elements of our PA smoothly.”

In his show-time role at front of house, Marsh has enjoyed the frequent respite from the quirks and inconsistencies of stadium acoustics. “The LEO Family really comes into its own on a greenfield site, without all the interferences of stadium surfaces. I’m not forced to pull frequencies out with EQ to battle house acoustics. It gives me an opportunity to play with effects, as you can really hear the difference in parameters and every slight adjustment is clearly audible.”

It’s been a long and grueling odyssey since the record-breaking tour launched on March 16, 2017 in Turin, Italy. Although everybody is ready for an extended holiday, Sheeran and his crew remain energetic and exuberant to the end. And, except for Sheeran’s bicycle tumble arm fracture in 2017, the tour has been trouble-free personally and technically.

“We were fortunate that on this tour we were able to take Major Tom’s Meyer PA with us almost everywhere,” comments Marsh. “We’ve taken it on and off airplanes a dozen times, in and out of ocean-going containers eight times, plus through torrential rain and heavy winds and even sand pits. And that same system is still going, which is a massive accolade for Meyer Sound.”

The ÷ (“Divide”) Tour encompassed 255 shows, closing with three concerts in Ipswich, England on August 24 – 26. As of August 2, the tour had surpassed U2’s former record (for the “360 Tour”) by chalking up total ticket sales of $736 million, with twelve shows remaining. The tour is set to break attendance records as well, with 8.5 million coming to the shows compared to 7.3 million for U2. Although Sheeran’s ticket prices were lower than those for the U2 tour, he made up for it with the sheer number of shows scheduled.