Fronted by the dynamic duo of lead singer Emily Armstrong and guitarist Siouxsie Medley, Dead Sara brings a savvy sense for hooks and melody to live shows. The band members run their own in-ear monitor mixes from their smartphones, thanks to the remote control capabilities of the QSC TouchMix-30 Pro compact digital mixer.

“For so many years, we toured while being at the mercy of in-house stage monitors,” recalls Armstrong. “We’ve used the TouchMix and in-ears for this tour and the one before it, and we love it.”

“We travel with a Gator rack case that contains an XLR splitter, a power conditioner, the transmitters for the in-ears, and on top, the TouchMix,” explains front of house engineer Josh Harner, who tours with the band. “Mics and DIs from the stage hit the splitter first, which then feeds one set of outputs to the TouchMix and the other to the front of house for me.”

Though the TouchMix can handle virtually any application, Harner finds that its flexible busing and generous complement of 14 auxiliary outputs (on XLR connectors) make it especially elegant as a monitor mixer. “We have four mixes: one for each band member,” says Harner. “These are set up as four stereo buses and show up as pairs on Aux outs 1 through 8, which feed three wireless transmitters plus one wired in-ear system for Sean Friday, the drummer.” 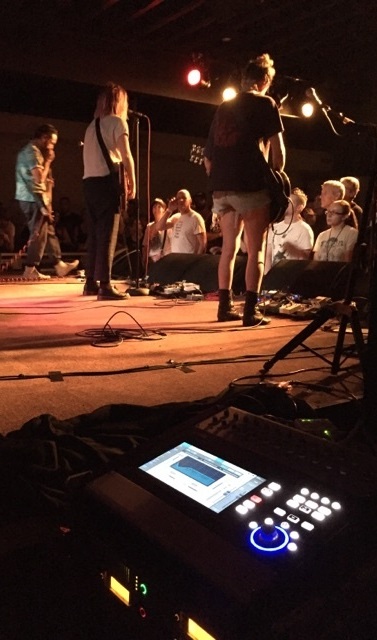 Harner further details how the TouchMix-30 Pro let Dead Sara take matters into their own hands — literally — when it came to managing those mixes: “During a couple of rehearsal days in L.A., I set up a Wi-Fi router for the TouchMix and had all the musicians link their phones to it. I gave them an overview of the TouchMix-30 Control app, which runs on both Apple and Android and lets you use a phone or tablet as a remote control. Because you can set permissions in the app, I was able to keep the screens uncluttered for them, giving each member thorough control of only his or her own mix.”

“I dialed in some starter gains and did some very basic EQ and compression for each vocal and instrument.” He continues, “On the road, each member’s mix would pop up as sends-on-faders right on their own device. Since each mix was stereo, they could pan themselves and other sources if they wanted. I also used an iPad with access to all settings so that during sound check, I didn’t have to keep running between the stage and the front-of-house position. It worked amazingly well.”

“The internal effects sounded great, too,” adds Armstrong. “I tend to like a ton of reverb on my monitor vocal. With the TouchMix, I can just dial it in without having to break Josh’s attention as he’s trying to run sound in the house.”

Harner also appreciates the TouchMix-30 Control App’s straightforward layout. “Besides setting permissions so each member sees only what they need, the overall layout is pretty friendly,” he notes. “That’s important because when you’re onstage performing and need to change something, you don’t want to be poking around in a lot of levels and sub-menus.”

The ability to save and recall scenes, which capture every setting in the TouchMix, also meant not having to reinvent the wheel for every show, as would be necessary with an analog mixer. “I’d save scenes as we went through the tour,” explains Harner. “Of course, you need to tweak things a bit for different rooms, but that’s far less so with in-ears. So, if someone in the band said, ‘Hey, I really liked the way we sounded at that other place last night,’ I could call up that scene as a starting point.”

The direct-to-disk multi-track recording of the TouchMix-30 Pro also lets the band capture their shows with zero fuss. “Since we’re taking a channel-by-channel split of 23 inputs total,” says Harner, “and that’s all happening upstream of the monitor busing and mixing, I just arm every track and go. We recorded every show where the venue didn’t charge a fee, and since you can just plug a USB hard drive right into the mixer, I wasn’t managing a laptop and a DAW while mixing a concert. It’s just all there for working on later.”

Both Armstrong and Harner praise the TouchMix-30 Pro’s audio quality and headroom. “The thing sounds surprisingly good,” says Harner. “I like having the Class-A analog mic preamps. I found we could push the gains pretty hard with no problems. I did a little of the usual high-pass filtering to take care of rumble but didn’t have to do any radical EQ scoops or anything. Everything just simply sounded like it should.”

“The best thing I can say about the sound quality is that it’s so good that I don’t think about it,” concludes Armstrong. “I know I can hear myself and the band exactly how I want to. It’s just so comforting to have that on the road, to not be wondering, ‘What’s it going to sound like tonight?’ The TouchMix has made doing sound on tour a lot less complex for all of us.”